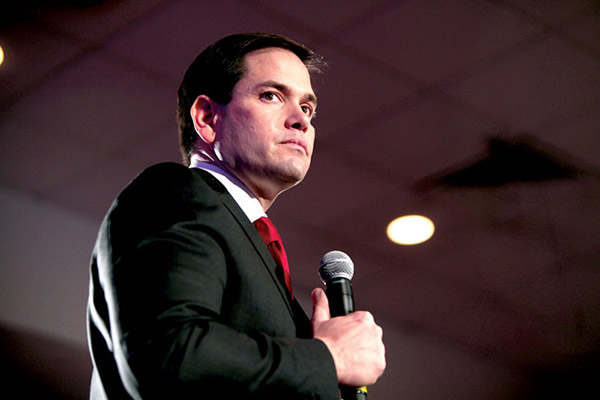 U.S. Sen. Marco Rubio (R-Fla.) denounced the anti-gay pogrom currently going on in the Russian republic of Chechnya, where hundreds of gay men have been detained in concentration camps, tortured, interrogated, and even killed.

Speaking on the Senate floor, Rubio relayed reports, garnered from both media outlets and eyewitness testimony, of what appears to be a coordinated campaign to rout out gay and bisexual men in the predominantly Muslim republic. He also called Chechen president Ramzan Kadyrov “ruthless” and a “brutal tyrant,” accusing the Kadyrov of encouraging family members to commit “honor killings” independently of the state.

“It’s instructive, in that vein, a statement from the spokesman for the Chechen leader. Here’s what he told the Russian news agency Interfax: ‘If such people existed in Chechnya,’ talking about gay men in particular and the LGBT community, this is his quote, ‘If such people existed in Chechnya, law enforcement would not have to worry about them, as their own relatives would have sent them to where they could never return.'”

“According to reports today, the Russian Foreign Minister, Lavrov, said that Russian officials have not seen information to confirm the reports,” Rubio said. “Additionally, Putin’s spokesman said, ‘We have no reason not to trust the head of the republic,’ talking about the Chechen republic, ‘until there are actual complaints in this regard, not abstract, anonymous but actual complaints.’

“Well the actual complaints are all around us. They’ve been well-documented in publications throughout the world. But instead, Vladimir Putin is choosing to prop up Kadyrov, the Chechen brutal dictator, and prop up his brutal regime instead of holding them accountable.”

Lastly, Rubio said that the United States should “never, ever” tolerate human rights violations against people because of “their political views, their religious beliefs, their sexual orientation.” He called on the U.S. government to ensure protection for those under attack and to hold those government officials engaging in anti-gay persecution responsible.

“We should use our voice on the global stage to call attention to these horrifying acts and to ensure they are condemned in the appropriate way, and ultimately in the hopes that they will be stopped,” Rubio said.

Rubio’s comments on the Senate floor follow denunciations of the atrocities by other U.S. leaders, including UN Ambassador Nikki Haley, Senate Minority Leader Chuck Schumer (D-N.Y.), House Minority Leader Nancy Pelosi (D-Calif.), former Secretary of State Hillary Clinton, and Vice President Joe Biden. Despite calls by LGBTQ advocates, President Trump has not yet issued a statement explicitly condemning the anti-gay persecution in Chechnya. However, the State Department has said it is “deeply disturbed” by reports of the atrocities and condemned any discrimination against people because of their sexual orientation.

Yet some liberals have noted that Rubio has not been particularly friendly to LGBTQ people in his own political career. Rubio signed a letter earlier this month asking President Trump to issue an executive order on “religious freedom” that would allow people, businesses or nonprofits to discriminate against LGBTQ people based on their personal religious or moral beliefs opposing homosexuality. He also supports the First Amendment Defense Act, which would cement those same religious exemptions into federal law.

Rubio’s statements on Chechnya have drawn comparisons to what many LGBTQ people saw as his exploitation of the Pulse nightclub massacre in Orlando to justify his re-entry (following his failed presidential campaign run) into the race for U.S. Senate. Following the deadly shooting rampage that killed 49 people, Rubio spoke out against the crime. However, he was subsequently criticized for accepting the endorsement from the head of the anti-LGBTQ organization Florida Family Action, and for agreeing to speak at a conference attended by social conservatives, including some of the nation’s most militantly anti-LGBTQ voices.

Ellen DeGeneres: World must “rise up” to help tortured gay men in Chechnya