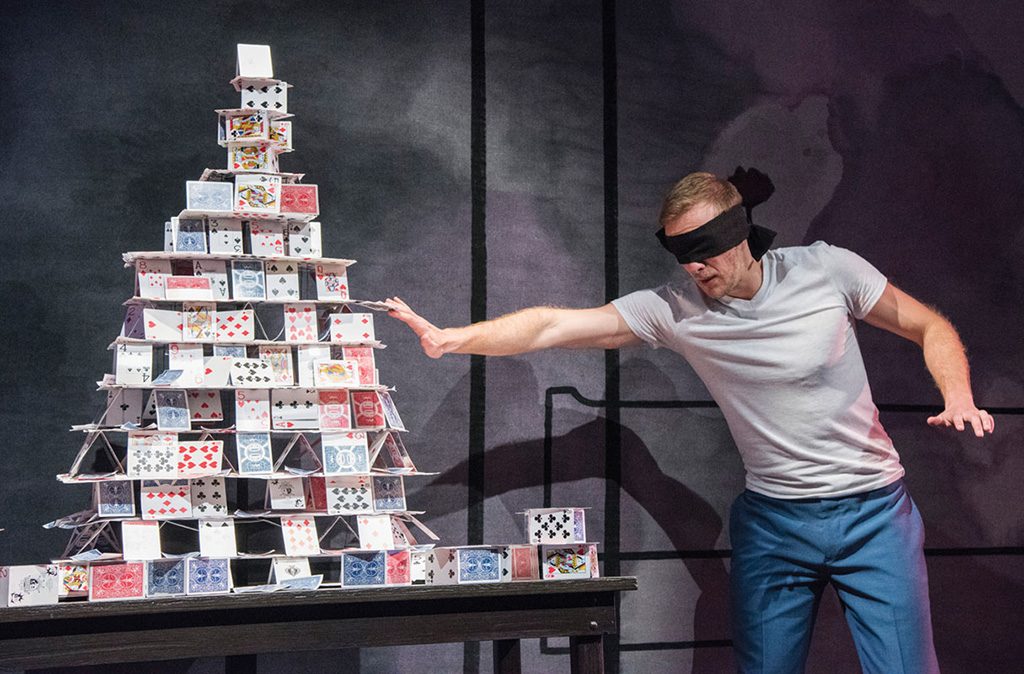 Let’s talk about magic. Not the supernatural or the fantastically unexplainable, but rather the craft of prestidigitation. Putting on a magic show is an art, a skill, an amusement — for some a career and others mere folly. Magic also, as pointed out in playwright Andrew Hinderaker’s highly entertaining The Magic Play, is the domain of con artists and deceivers. It’s one of the only socially acceptable forms of flat-out lying, this side of acting or politics. What sort of person cultivates a talent for gaining people’s trust, just to turn their credulity against them for tricks and giggles?

The Magician at the heart of The Magic Play (★★★★), now at Olney Theatre, talks a good game about trust. As performed by Brett Schneider, an expert magician credited with creating illusions for the show, the Magician demonstrates with his well-honed patter and sleight of hand how trust must be seduced and cajoled from an audience in order to control their perception of what’s real. He lets us in on the open secret that creating the illusion of spontaneity demands an obsessive attention to detail.

Being obsessively controlling, practically a necessity for a magician, isn’t a quality that translates well to relationships. That’s what drives this crafty drama, which draws ample tension from the Magician’s tightrope walk across the fine line between performing and pretending. As he works his magic for the audience’s delight, he finds his cool composure disarmed and his mind distracted by scenes from his rollercoaster courtship with a lover, Daniel (Jon Hudson Odom), who’s just left him. In the midst of a series of dazzling card tricks — with a close-up view projected live on screen above the stage — the Magician engages participants from the crowd, while he and Daniel, an Olympic diver in training, engage in the tricks and subtle mind games that might doom their romance.

A canny amalgamation of slick entertainment and heartfelt storytelling, the The Magic Play has been smartly staged by director Halena Kays to reap full advantage of the suspense underpinning the Magician’s artfully constructed set-pieces. As an illusionist, Schneider, charming and accessible in a natty blue suit (and out of it, as the case may be), effortlessly engenders trust, conveying a mastery of craft that’s vital for delineating his guarded, perfectionist character.

The Magician’s virtuosity, or the appearance of it, is also key to Hinderaker’s daring balancing act of presenting a magic show that deconstructs magic shows, while also being a play that deconstructs a magic showman’s relationship. It strains at moments to push its magic-as-metaphor-for-life theme, but when it all works together, which is most of the time, the drama and romance, kindled by magic, are combustible. (One can imagine Tony-winner and accomplished magician Neil Patrick Harris chomping at the bit to get in on this act.)

Both Schneider and Odom shine in portraying the confidence and determination of two supremely skilled, trained individuals, accustomed to performing at their highest level. They produce palpable chemistry, whether flirting or fighting. And in an environment of audience participation, the lovers’ squabbles sometimes can feel uncomfortably intimate, which plays as a virtue. It’s an achievement in appropriately awkward realness.

Schneider and Odom certainly achieve an authentic sense of vulnerability as their characters search for commitment — or, in the Magician’s case, seek whatever clues about himself are to be gleaned from meeting the Father (Harry A. Winter, in a brief but excellent turn) who abandoned him.

The Magician’s father is also a magician, and even more so an enigma to his son, who’s taken to proclaiming that, “Sometimes the lie is more beautiful than the truth.” As the Magician demonstrates, magic succeeds through deception, by exploiting intimacy to redirect the audience’s eyes away from whatever might give away the lie.

The Magic Play makes a beautifully haunting case for presenting oneself honestly. While romance might, like magic, depend on some degree of self-deception and subterfuge, in the end, true love is stifled by too much illusion. At some point, every performer, or lover, has to drop the act and bare their true feelings.