Magic Man: Brett Schneider ramps up the illusions in “The Magic Play” 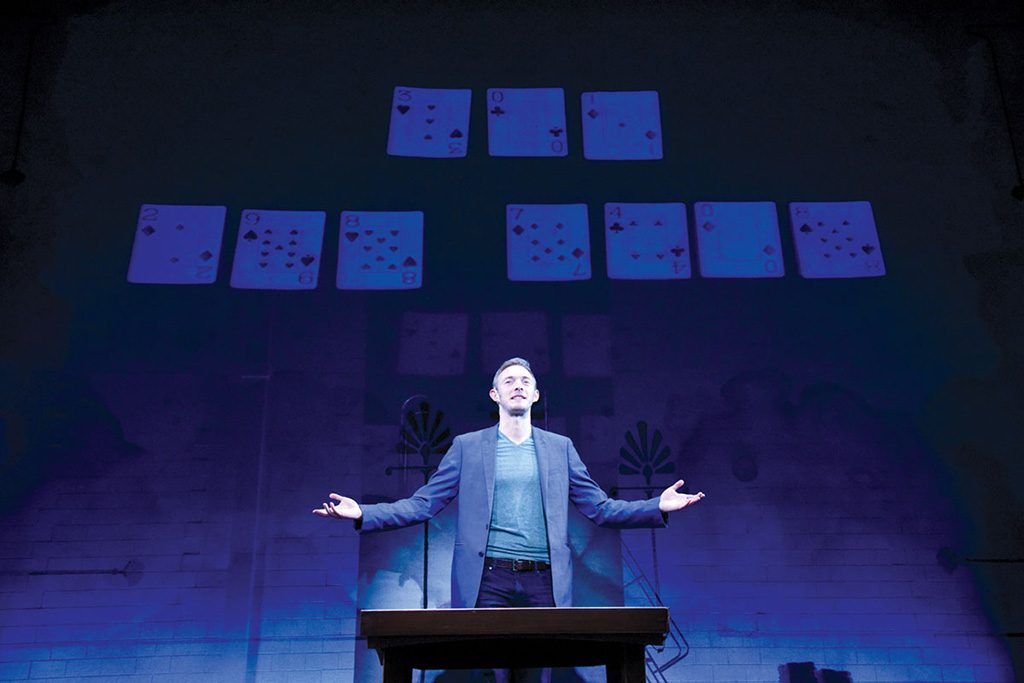 Should The Magic Play, currently in a rolling World Premiere at Olney, be performed by another regional theater, the lead will have to be skilled at magic. Extremely skilled.

“The actor playing this particular role will definitely have to be of the caliber of a professional magician,” says Brett Schneider, a professional magician himself who, for the past several years, has helped playwright Andrew Hinderaker (Colossal) develop The Magic Play. Schneider stars as The Magician, a gay man undergoing a series of personal revelations over the course of a “live magic show.” “No punches are pulled in the magic in the show,” the 32-year-old continues. “We wanted to make sure that this is not some facsimile of a good magic show, but in fact, that the magic you’re seeing is actually of a high quality.”

Schneider originated the role at the Goodman Theatre in Chicago before arriving at Olney. And he has had no trouble slipping into an alternate character while dazzling the audience with tricks and illusions from his own arsenal.

“There’s a great quote by a 19th century magician — Jean Eugène Robert-Houdin — who says a magician is an actor playing the part of a magician. When I am performing as a magician separately in my line of work, apart this play, I am still thinking in terms of art, in terms conflict, in terms of narrative.”

One catch: the use of random volunteers from the audience each night. “There’s four volunteers that are brought up on stage during the show,” he says. “That’s part of the journey of this piece of theater. The unpredictability, the giving up of control of the show — it’s a theme both in the story and also in what you actually see play out on stage.

“The play ends in a moment that’s purely spontaneous between a random audience volunteer and The Magician. It determines, in large part, the last piece of magic the audience sees. It is not a preplanned event. It’s a live event. It happens every night. Depending on who that volunteer is and how they answer a particular question means that you might see a slightly different show than you would on another night.”

Randy Shulman is Metro Weekly's Publisher and Editor-in-Chief. He can be reached at rshulman@metroweekly.com.
← Previous Story Review: Smart People at Arena Stage
Next Story → Building the Wall at Arena Stage