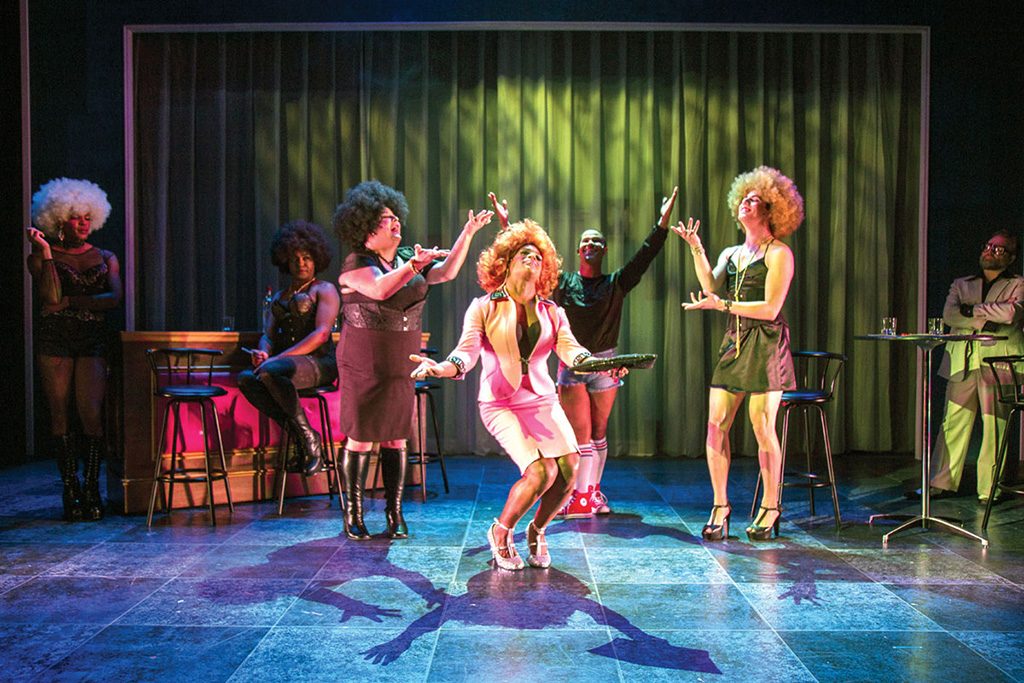 A queen among legends, the late Dorian Corey left her mark on drag history, reigning for years as one of the leading house mothers of the Harlem ball scene. And she left a legacy of pop cultural influence with her world-weary but charmingly eloquent commentary throughout Jennie Livingston’s 1991 documentary Paris Is Burning.

More bizarrely, Corey also left behind — tucked away inside the dressing room where she filmed interviews for Paris — a nondescript suitcase containing the mummified corpse of a purported ex-lover. The legendary female impersonator spilled a lot of T in her time, but it seems she kept her most shocking secret to herself.

The mystery of the dead man found in Corey’s closet remains largely unsolved. The victim was identified, but neither his true relationship to Corey nor the circumstances surrounding his murder are known with certainty by anyone who’s alive and willing to talk about it. From the frayed threads of that mystery, and the known facts of Corey’s glamorous yet troubled life, the creators of the new musical Dorian’s Closet (★★), now in a World Premiere run at Rep Stage, have spun a fictionalized tale of gender-crossed romance amid showbiz struggle.

Set primarily in notorious Times Square gay dive bar Sally’s Hideaway, where Corey performed in the ’80s and ’90s, the show recreates the tawdry, pre-Giuliani Deuce as a candy-colored fantasyland for dreamers. But behind the smiles and sequins, lurks danger in the form of drugs, violence, and a budding epidemic — all gunning for the gays, transvestites and working girls who populate Sally’s.

Having a (Drag) Ball: Stephen Scott Wormley of “Dorian’s Closet”

Featuring music by composer Ryan Haase, and book and lyrics by Richard Mailman, Dorian’s Closet bears some resemblance to earlier Times Square tales Sweet Charity and The Life. Those great musicals also exploited the seedy glamour of New York’s 42nd Street as a gritty, yet playful backdrop for ultimately sad stories about strivers and survivors. Charity and The Life both benefited from the tune-making of the great Cy Coleman, whose suggestive bump-and-grind rhythms echo through Haase’s strongest songs.

Director Joseph W. Ritsch and choreographer Rachel Leigh Dolan honor that musical inspiration with staging (particularly in the numbers “I’m Working Here” and “Shade”) that pays homage to original Sweet Charity director and choreographer Bob Fosse. The show might also be paying homage to its inspiration, Paris Is Burning, but the script’s interpolations of indelible quotes, characters and storylines familiar from that film feels uninspired. Thoughts expressed in the documentary by the likes of Corey, Labeija, and Venus and Angie Xtravaganza, among others, have been recycled as monologues or dialogue for characters who register here as only half-conceived imitations.

To paraphrase another drag queen favorite, Corey’s mummy mystery is a situation pregnant with possibilities, and this show’s creators came up with a formulaic hodgepodge of musical tropes and verbatim quotes. Even the costumes quote the movie, although designer Sarah Cubbage has so exquisitely executed some of the designs that there’s no harm nor foul in her glittering, high-glam wardrobe. Dolan’s choreography references the film, too, although the best that can be said about the cast’s voguing is that it looks recognizably like that’s what they’re doing.

The singing, for the most part, is more pleasing. Wormley is a commanding lead, confidently portraying Corey’s inner strength, even while succumbing to her dangerous attraction to Robert (Jay Adriel), an enigmatic admirer she meets at the bar. But, either by direction or by choice, Wormley’s portrayal doesn’t capture real or fictional Corey’s commitment to embodying a feminine appearance. That aspect of gender fluidity turns out to be integral to Mailman and Haase’s plot, yet it simply doesn’t come across in the characterization.

Likewise, Angel, whose story clearly is inspired by the tragic life and death of trans woman Venus Xtravaganza, is ill-served by a characterization that hews closer to Butch Queen First Time in Drag. And shouldn’t a musical about leading ladies of the ’80s house ball culture know that the real-life Monica Mugler likely was a member of the House of Mugler, not just a queen named “Mugg-ler”?

As Pepper Labeija, Dwayne Washington more precisely hits the mark playing the endearingly immodest ballroom superstar who emerged, along with Corey, from Paris Is Burning with her own following and catalog of hit quotes. Among a cast who, in a few cases, play their roles in the plot minus accentuating detail, Washington develops a character of substance. His Pepper is a winning amalgam of the famously wisecracking queen, and an exciting new creation. Would that the entire show felt so fresh.

André Hereford covers arts and entertainment for Metro Weekly. He can be reached at ahereford@metroweekly.com. Follow him on Twitter at @here4andre.
← Previous Story Building the Wall at Arena Stage
Next Story → Review: The Arabian Nights at Constellation Theatre