We’ve all been there. You’re at a bar, and you’ve just met a dangerously hot charmer who’s invited you to ditch this place and go for a ride. Before heading out, you make a quick stop in the bathroom to freshen up a bit. And, if you’re anything like Amy Schumer’s up-for-whatever Emily Middleton in the hilariously cringeworthy Snatched (★★★½), you’ll be careful to check the freshness of all your parts. And, if you’re like Emily, even that slight gesture of preparation can, in one split-second, lead to outrageously acute humiliation.

Emily’s constantly losing — her boyfriend, her self-respect, her job, her flip-flops. But the audience wins, because Schumer’s square in her wheelhouse playing that awkward girl you know, or that awkward girl you are — whether you’re a girl or not. Directed by Jonathan Levine (The Night Before, 50/50), from a script by Ghostbusters writer Katie Dippold, Snatched casts the ever-relatable Schumer as a modern woman who takes her cat-loving, buzzkill mom, Linda (Goldie Hawn), on a resort vacation to Ecuador that she’d planned with the rocker boyfriend (Randall Park) who just dumped her.

Barely able to pry Linda out of the tightly locked home she shares with agoraphobic adult son Jeffrey (Ike Barinholtz), Emily’s determined to have the most spectacular girls’ trip ever, despite being saddled with the least fun person she knows. While Emily envisions an adventurous week of waterfalls and rainbows, Linda’s idea of fun seems to involve passing judgment on her reckless daughter while sitting beside a pool in enough linen and sunblock to mummify a horse.

Hawn commits to the cliché of Linda as the heartbroken romantic, who never got back in the game after a tough divorce permanently dimmed her radiance and self-confidence. For good measure, Snatched adds the expected — and necessary — spice of Linda’s Baby Boomer befuddlement with apps and devices, as well as her nagging disapproval of Emily’s lifestyle of day-drinking and casual sex.

Now the straight man, Hawn — who hasn’t starred in a film since her Golden Globe-nominated role in the 2002 comedy The Banger Sisters — grounds her performance as Linda in the very real anxiety of a woman so cloistered in her disillusionment she’s given up on enjoying herself. She proves a great match for Schumer, who excels at playing the opposite, a character who’s solely intent on enjoying herself — at all costs. Partying like she’s got something to prove, Emily ignores any and all red flags that might lead to, say, her and Linda being kidnapped for ransom and held deep in a South American jungle.

As the mother-daughter duo labor to escape their captors, and a homebound Jeffrey harangues a blasé State Department agent (Bashir Salahuddin, in a scene-stealing deadpan turn) to dispatch the Army or the A-Team or anybody to their rescue, the movie shifts into a wild, unpredictable action-adventure. Levine, fresh off directing the madcap shenanigans of last summer’s Mike and Dave Need Wedding Dates, builds resonant suspense from gross-out comic bits and high-action set-pieces alike, while indulging a great eye for framing a visual punchline.

Schumer and Hawn are heavily assisted by a great supporting cast, including Wanda Sykes, as busy-body fellow vacationer Ruth, and the inimitable Joan Cusack, in a completely silent role, as Ruth’s “platonic friend” Barb. As overgrown manchild Jeffrey, Barinholtz’s brand of comically annoying might be an acquired taste, but Chris Meloni, popping up as exactly the sort of Romancing the Stone-style ranger a hostage might hope to meet while escaping through a rainforest, is always welcome to the party.

Despite some questionably filtered cinematography and a sloppy sound edit or two, Emily and Linda’s adventure rarely goes astray in delivering knockout entertainment. The movie also manages to rack up a pretty high body count, even by the standards of this Hangover-abetted brand of mayhem-strewn, disaster-comedy. And, while the filmmakers are careful to lampoon the supposed obliviousness and entitlement of American tourists, Snatched still tacitly endorses the creaky notion that, wherever they go in the world, Yankee blondes are in danger of falling prey to bad hombres like crimelord Morgado (Óscar Jaenada).

Luckily, it’s a pleasure to overlook politics when the leads generate laughs at such a furious pace. And it’s an even greater pleasure to say this: Welcome back, Goldie Jeanne.

Snatched opens in theaters everywhere on Friday, May 12. 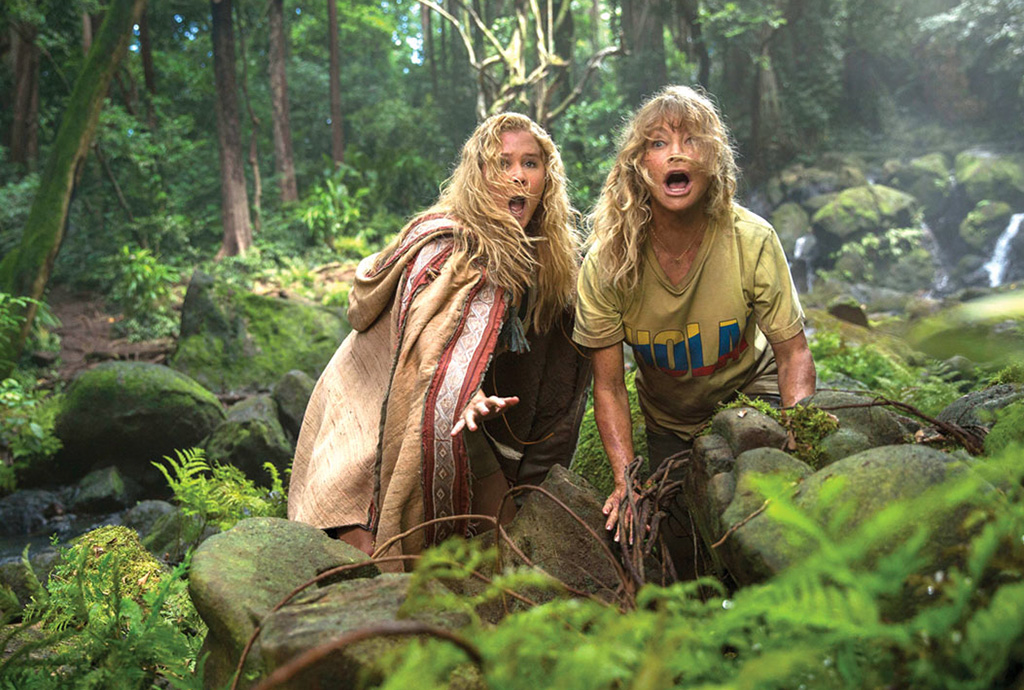