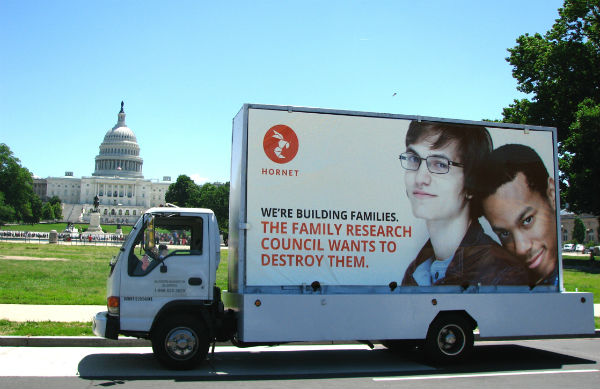 The gay app Hornet has announced it’s launching a new billboard campaign to counter the divisive rhetoric that is commonly spouted by anti-LGBTQ groups.

Throughout the summer, Hornet will strategically place billboards close to the headquarters of various anti-LGBTQ organizations that have been designated as “hate groups.” Hornet will use information from watchdog groups, including the Southern Poverty Law Center, as a roadmap for planning out where to erect their next billboard.

Each billboard will feature a same-sex couples or group of friends who have found a safe space to connect and congregate. A short tagline on each billboard will be tailored to the city’s anti-LGBTQ organization.

Hornet will erect its first billboard on Thursday, June 8, in Washington, D.C., headquarters of the conservative Family Research Council. The company will then take its campaign to Topeka, Kan., home of the infamous Westboro Baptist Church, and then to Colorado Springs, Colo., home of Focus on the Family.

“We are erecting these billboards across the country to draw attention to places from where hateful rhetoric and influence on anti-LGBTQ legislation stem,” Hornet President Sean Howell said in a statement. “The billboards are a beacon of hope for the LGBTQ residents of these areas and a reminder to local leadership that we will not be silenced and we will not be erased.

“The 2016 elections created a divisive atmosphere in our country, and, by all accounts, hate crimes against minority groups have been on the rise,” continued Howell. “As a community, we will not be torn apart. We will continue to thrive and resist attempts by any groups to reverse the progress made over the last decades.”

John Riley is the local news reporter for Metro Weekly. He can be reached at jriley@metroweekly.com
← Previous Story Retired generals ask Mattis not to reinstate ban on transgender troops
Next Story → Woman who sued Planet Fitness over pro-transgender policy loses lawsuit