LGBTQ people are a vital part of Fringe. We asked eleven to sit for portraits and share what the month-long event means to them. 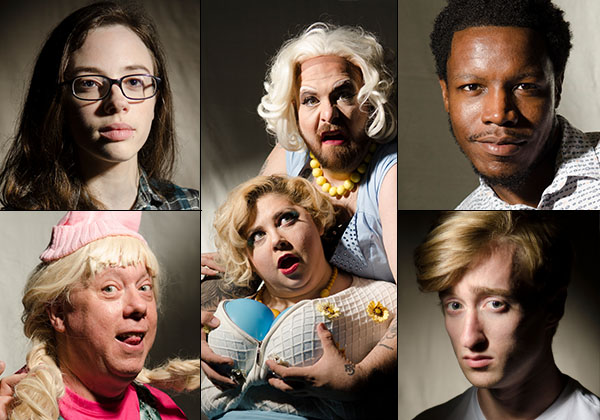 “Fringe is like Christmas to the theater world in D.C.,” says Eric Cline. “It’s a place where really bizarre, obscure, and experimental ideas can really get a shot to say, ‘Hey, this might work.’ It doesn’t always work, but often it’s just a really fun opportunity to connect with things you wouldn’t be able to see at mainstream theater events.”

Cline is part of The Coil Project, a creative collective that utilizes Fringe as a means of presenting new theatrical works. His show, The Changeling Child, is one of more than 85 productions — some big, some small — slated for this year’s annual festival, which opens tonight and runs through July 30. He is also one of the dozens of LGBTQ participants who write, direct, produce, act, and generally are vital contributors to the Fringe experience.

“As a woman of size, I am automatically excluded from a tremendous amount of traditional theater,” says Rebecca Rose Vassy, who goes by the stage name Diva Darling and is the star of the burlesque entry Tiresias’ Tits. “Doing shows here, I can define my art and…present myself in the way that I want to be seen and the kind of work that I want to be known for. To be able to do that across race, across gender, or across orientation, size, age, all these restrictions that you would have in anything outside of Fringe. It’s a very open atmosphere and…it’s great to have a place where all of that can be represented.”

“Fringe allows people to really experiment and push boundaries,” she says during a break in a Saturday afternoon photo shoot at Fringe’s Trinidad Theater on Florida Avenue NE. “A sense of community is created by all these different theater companies and groups of people, maybe who aren’t even theater companies, but just get together and make theater. I think that sense of community is really valuable. It’s a great way for everyone to support each other and say, ‘I’ll go to see your show. And your show and your show.’ And they’re all just in this one little area and you just gotta hit them up as fast as you can.”

For this year’s feature, we asked eleven LGBTQ Fringe participants to sit for portraits, providing a look at just a few of the Queer Faces of Fringe.

Scroll through the full album — just swipe or click!

For a full listing of all shows in the 2017 Fringe Festival, click here!