Review: Atomic Blonde is thin on plot but heavy on incredible action 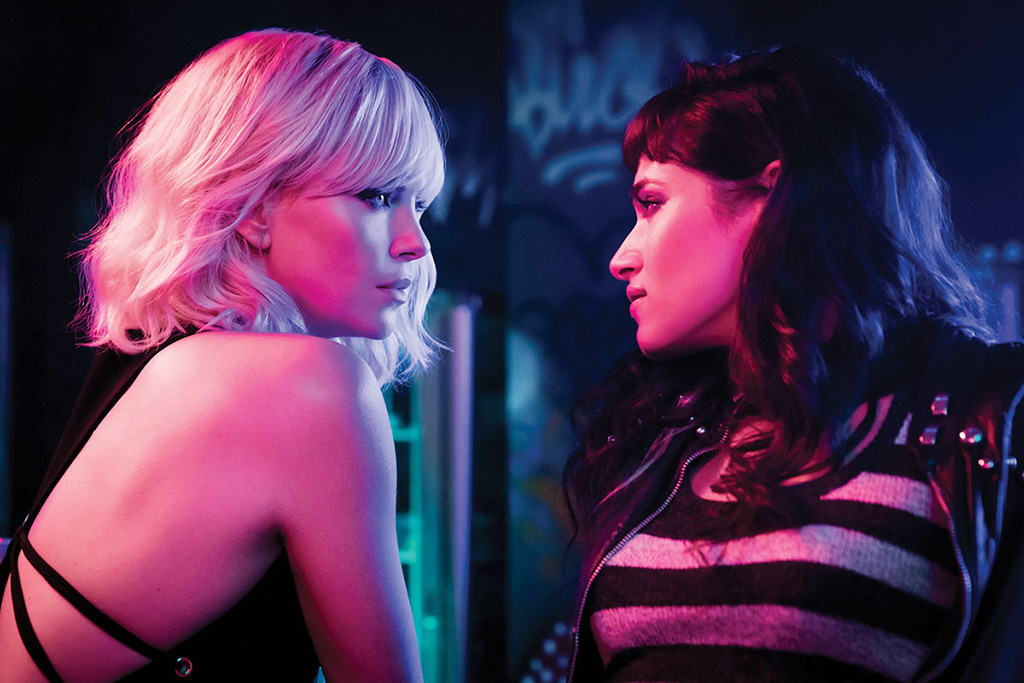 Charlize Theron’s transformation into action-movie star blazes on with Cold War spy thriller Atomic Blonde (★★★½). Based on Antony Johnston and Sam Hart’s graphic novel series The Coldest City, it’s set in 1989 during the frenzy of geopolitical upheaval before the figurative fall of the Berlin Wall. The U.S. and the Soviet Union, warming towards peace on the surface, still roil with deep-set mistrust, if not all-out enmity.

Oscar-winner Theron stars as ruthlessly efficient MI6 agent Lorraine Broughton, a platinum blonde with an impressive set of skills tasked with investigating the murder of an agent in Berlin. She proceeds to roll like a freight train through the city’s underground network of cunning, backstabbing Allied and Communist spies, as operatives from MI6, the CIA, the KGB, the Stasi, and French intelligence chase government secrets and each other over the Wall and back again. Trained to infiltrate, undermine, and trust no one, they’re a hard-drinking, hard-partying lot. They’ll smash a fellow’s face in with a Mercedes just as soon as they’d say “hello.”

Adapted by first-time feature director David Leitch and screenwriter Kurt Johnstad (300), Atomic Blonde is a spy-lover’s spy movie. From whispered exchanges of coded messages, to agents sliding envelopes across tables or developing surveillances photos in their private darkroom, this thriller revels in putting all the espionage game pieces in play. So, of course there’s a list — cunningly called the List — and everyone’s after it, because every spy in Berlin is on it. As pointed out by fellow MI6 operative James Percival, played with delicious mischievousness by James McAvoy, the spy game is what they do best, and it’s all they know. For some, it’s a game they don’t want to see end. That’s where the List comes in. If it gets out, Lorraine and every operative in the network will be exposed to their enemies.

But while Atomic Blonde is all about the List, it doesn’t consistently hold as much interest as the punishing, bone-crushing, eye-gouging action that surrounds the moments of plot exposition. Lorraine attacks entire buildings full of goons with everything but the kitchen sink. Corkscrews, hot plates, knives, shivs, knees and fists all get thrown in the bloody, messy business of protecting her assets. 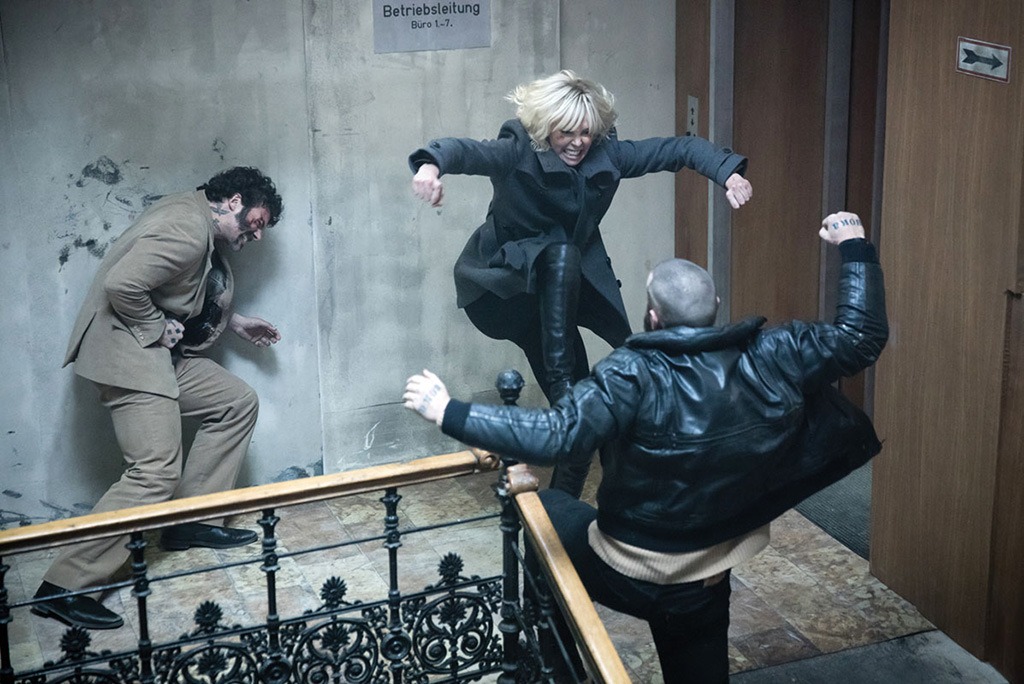 Leitch, a former stuntman and fight coordinator, handles set pieces with gusto, while he and cinematographer Jonathan Sela (John Wick) don’t shy away from gore in the epic fight scenes. The film earns its R-rating, with the camera roving and circling stylishly around Lorraine as she beats the pulp out of all comers, and sustains some vicious beatings herself. And that’s no stand-in throwing punches and kicking men through tables. Theron — who trained in martial arts for the role — bolsters her action star status by performing most of her own stunts, and remains confident and imposing even when bruised. And lest we forget that a good spy should maintain tools of seduction within their arsenal, she also sizzles in a romp with Delphine Lasalle (The Mummy‘s Sofia Boutella), a mystery woman on her tail.

Atomic Blonde fulfills many a fantasy with its neon-lit, hedonistic take on the last days of the Cold War. The film’s mood and palette are sullen, but the visuals are kinetic, and so is the soundtrack, which is drenched in pounding ’80s new wave. The songs and the excellent sound design contribute to the relentless pace, while the plot preps for a few nifty twists.

However, the actual substance of that plot doesn’t always seem to matter, beyond a vague notion of spies giving their lives as nothing more than stooges for utterly self-interested world powers. And while the film really takes off in tight spaces, Leitch’s staging of large-scale action leaves something to be desired. A whizzing car chase through the tunnels beneath the streets of Berlin pales in comparison to the superhero foot-chase along the same length of road in last summer’s Captain America: Civil War.

Lorraine’s no superhero, but she comes mighty close, with her extraordinary ability to take a punch and an irrepressible, take-no-prisoners fighting style — literally take no prisoners, as she almost always shoots to kill. In this deadly spy’s patent leather stilettos, Theron strides like a woman born to break both hearts and necks. McAvoy and agency bosses John Goodman and Toby Jones provide amusing backup, but Theron lights the fire that keeps Atomic Blonde burning.

Atomic Blonde is rated R, and opens in theaters everywhere on Friday, July 28.

André Hereford covers arts and entertainment for Metro Weekly. He can be reached at ahereford@metroweekly.com. Follow him on Twitter at @here4andre.
← Previous Story Review: Dunkirk – Gripping from start to finish
Next Story → Check It, which follows America’s first gay gang, screens at Anacostia Arts Center