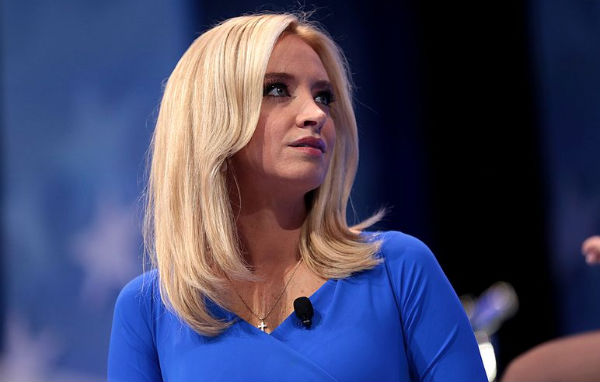 When Kayleigh McEnany was first named Republican National Committee spokeswoman two weeks ago, LGBTQ advocates pointed to her promotion as evidence that Donald Trump and his most loyal supporters are taking over the GOP and remaking it in their own image.

McEnany, a former CNN commentator, rose to prominence during the 2016 election for media appearances in which she almost always praised the president and his campaign team for their messaging and strategy. Since his election, she has frequently defended Trump and members of his administration for their actions, including against charges that they have promoted an agenda hostile to LGBTQ rights.

But now, McEnany’s own views on LGBTQ rights and protections are receiving greater scrutiny as she becomes the official spokesperson for the president’s party. And even a cursory glance at her past comments has raised some flags among LGBTQ advocates and their allies on the political Left.

McEnany’s opposition to the progress enjoyed by the LGBTQ community in recent years is less grounded in outright animus towards LGBTQ people and more by her unwillingness to stray from one of conservatism’s basic tenets: that some policy decisions are best left up to the states. This was the reason that McEnany argued in April 2015 that the Supreme Court should not overturn various states’ same-sex marriage bans, even if the bans are denying some citizens their right to equal treatment under the law.

“If you tune into the mainstream media, you will hear a lot of farcical blabber about state-sanctioned discrimination, but that is not what this case is about,” she wrote. “The case before the Supreme Court tomorrow is about something entirely different: the right of the state to define marriage, a right that has been in its constitutional domain since the inception of this republic.”

McEnany then criticized the court for what she saw would be — and eventually was — its final decision to legalize same-sex marriage nationwide. She said the court essentially would be reversing itself from its 2013 opinion overturning Section 3 of the Defense of Marriage Act, in which it argued that the federal government had no right to discriminate against couples who were recognized as legally married in their home states.

“In the opinion, the Court extols the virtues of state autonomy and states quite clearly: ‘By history and tradition the definition and regulation of marriage… has been treated as being within the authority and realm of the separate States,'” McEnany wrote. “So why, now, two short years later, should Ohio, Kentucky, Tennessee, and Michigan’s right to define marriage as between a man and a woman be any less defended than New York’s decision to define it more broadly?”

As the LGBTQ media advocacy organization GLAAD has reported, McEnany has also claimed that the Supreme Court’s ruling on marriage equality constitutes an infringement on the “religious rights” of those opposed to homosexuality. Specifically, McEnany appears to believe that, while LGBTQ couples in unions are entitled to certain contractual rights, calling those unions “marriages” will lead to people suing churches, mosques, and synagogues over the right to get married in places of worship.

She also tweeted her support of Antonin Scalia’s dissent from the majority in the Obergefell case legalizing same-sex marriage.

McEnany has expressed opposition to allowing transgender people to use bathrooms matching their gender identity, arguing that pro-transgender restroom policies could open up the door to abuse by sexual predators who will claim they are transgender to gain access to intimate spaces.

“I do not mind if Caitlyn Jenner uses the same bathroom as me,” McEnany said in an appearance on CNN. “But as a policy basis, deference to the states is a core key component of conservative ideology.

“[T]he reason conservatives want this left up to the states is that I do believe there is a viable argument, not that transgender individuals pose any harm, but that this could be utilized by some men, for instance, to go into female bathrooms, it’s happened at Target, which does have the same policy in place,” she added. “Voyeurism issues where cameras were put by men taking advantage of the policies, not transgender individuals, men, straight men coming in and really being a predator against women.”

In a separate appearance, she framed transgender bathroom access as a threat to women and little girls, again raising the “predator” argument as justification for the Department of Education’s decision to rescind Obama-era guidance on transgender students.