By John Riley on September 12, 2017 @JohnAndresRiley 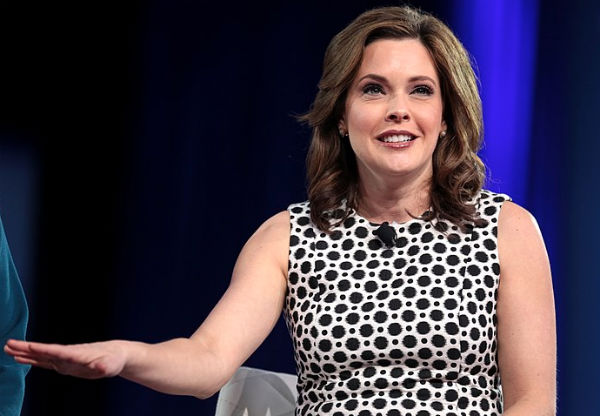 In what is becoming a routine pattern, the Trump administration has hired yet another individual with a history of anti-LGBTQ statements to fill a high-profile position.

Mercedes Schlapp, a frequent conservative pundit on Fox News and the wife of American Conservative Union Chairman Matthew Schlapp, will join the White House Press Office in a senior role, as Politico reported.

Schlapp, who previously served in the George W. Bush administration as a spokeswoman for Spanish-language media outlets, is being brought on by Trump’s chief of staff, Gen. John Kelly.

According to Politico, Kelly is trying to transform a West Wing that has been beset by leaks into a more tightly run shop, starting with bringing on board people like Schlapp, who have both a conservative pedigree and significant experience in Washington.

Given her professional background, it is not shocking to learn that Schlapp has frequently taken the conservative position arguing against expansions of LGBTQ rights, instead preferring to paint Christians as a victimized class of people under attack by socially liberal policies.

As such, she — like her husband — has been a vocal proponent of “religious freedom” legislation or executive actions that would provide exemptions for people who wish to refuse goods and services to others based on the seller’s personal objections to same-sex marriage or homosexuality in general.

Schlapp has made clear her own opposition to marriage equality, writing in U.S. News & World Report in 2012 that President Obama’s declared support for marriage equality was a “political ploy” that “represents the worst in politics.”

“Although his announcement was not a shocking revelation by any means, President Obama’s abrupt decision will lead to many disappointed voters who feel betrayed,” Schlapp wrote. “He will surely re-invigorate conservative and religious voters in key states who continue to feel that President Obama is threatening their religious liberties by imposing his liberal agenda on their churches. From imposing mandates on contraception to now redefining marriage, churches are feeling minimized and frankly persecuted by the administration.”

Writing in The Washington Times, she also criticized LGBTQ activists who protested outside Mike Pence’s temporary home in Chevy Chase shortly after the election, saying that Pence was being “tagged as the enemy because he is Christian and believes in traditional values on marriage and supports religious freedoms.”

“Instead of welcoming the new neighbor, they protest his arrival. They denounce Republicans as intolerant yet, ironically, they are the ones who cannot tolerate dissent,” Schlapp said of the left-wing protesters. “They shove their liberal ideology in the face of others, in our schools and in the public square. They relentlessly pursue a progressive agenda that has been rejected by many Americans.

“According to a Marist poll commissioned by the Knights of Columbus, 89 percent of Americans ‘see protecting religious freedom as a priority.’ It is the left, not the Pences, that is out of step with where most Americans are on this issue.”

Schlapp has also pushed the myth that “two-thirds of Americans oppose the Obama guidelines on transgender bathrooms” in schools. That figure appears to be based on one Rasmussen poll which is an outlier, even among past Rasmussen polls on the issue.

“Mercedes Schlapp’s addition to the White House brings another ‘yes’ person to the Trump Administration that only wants to erase the hard-fought progress and acceptance LGBTQ Americans have made in recent years,” Drew Anderson, the director of news and rapid response at GLAAD, said in a statement.

“Schlapp is a seasoned anti-LGBTQ activist who would have no trouble blindly communicating any anti-LGBTQ measure the president rubber stamps,” Anderson added. “During a time when the safety and well-being of the community is at stake — LGBTQ people need someone who will stand up for them, not simply say ‘OK’ to any discriminatory act.”