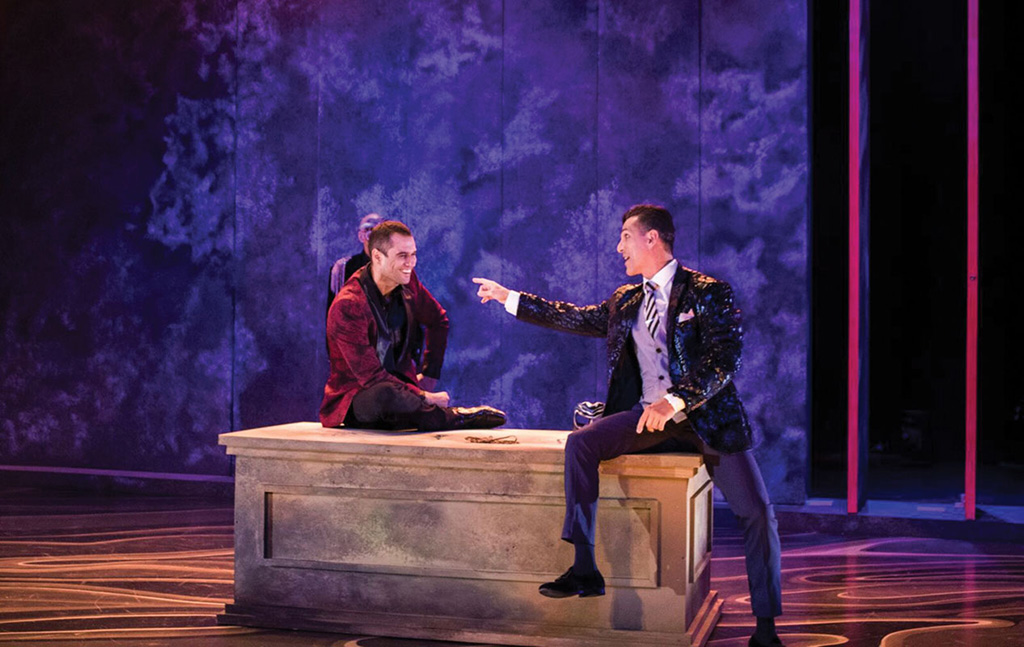 Like many a fair to middling lover, GALA Hispanic Theatre’s production of Don Juan Tenorio (★★★) tempts the eyes and ears with glamour and sweet words. But the legend’s advances, unsteady in aim or intent, ultimately fall short, leaving the heart unmoved.

Spanish playwright and novelist Nando López has adapted the original 19th-century play by José Zorrilla, with director Carrasquillo providing the English translation for supertitles projected above-stage. The language, even in translation, is sumptuous. And Don Juan’s alluring way with words isn’t the sole weapon in his arsenal. 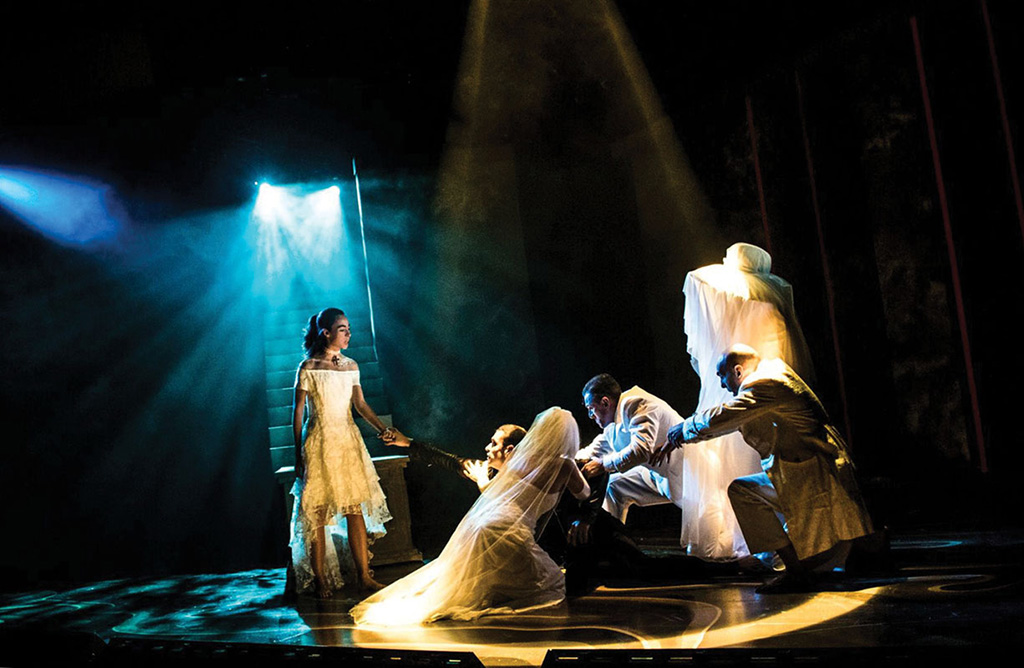 Outfitted in Jeffery-Jay Peavy’s tailored, tonal costumes, leading man Iker Lastra is a handsomely imposing figure. The Helen Hayes-nominated Spanish actor performs with a silken ease and canny stage awareness, despite direction that often calls for Don Juan to swoop across the set far too conspicuously, or for other characters to plant themselves awkwardly in his background.

When unrepentant womanizer Don Juan enters into a contest with his fiercest rival, Don Luis Mejía (Peter Pereyra), not only is each man’s pride at stake, but so are the lives of the men they’d duel to the death, and the hearts of the women they’d ravish. To watch Lastra and Pereyra bounding and perching, like cats or Cats, atop Tsappas’ abstract surfaces dampens the dueling Dons’ fire. It’s less a match of legendary equals than a Zoolander walkoff.

Also, Pereyra doesn’t register the presence of a heartless, or even conflicted, ladykiller. In his and Lastra’s early scenes of jousting wordplay, he appears to describe more than enact the rivalry that supposedly has set all of Sevillian society abuzz. Lastra, on the other hand, achieves a more natural tone finessing the wordy script and Don Juan’s awakening to love.

Lastra is at his most persuasive delivering Don Juan’s beautiful lover’s plea to his young convent-bound conquest, Doña Inés (Inés Domínguez del Corral). The pitiless lothario might finally understand the sacrifice of love, as the rogue finds his selfish plans of deflowering then leaving Inés endangered by the shock of genuine affection he feels for the cloistered virgin. 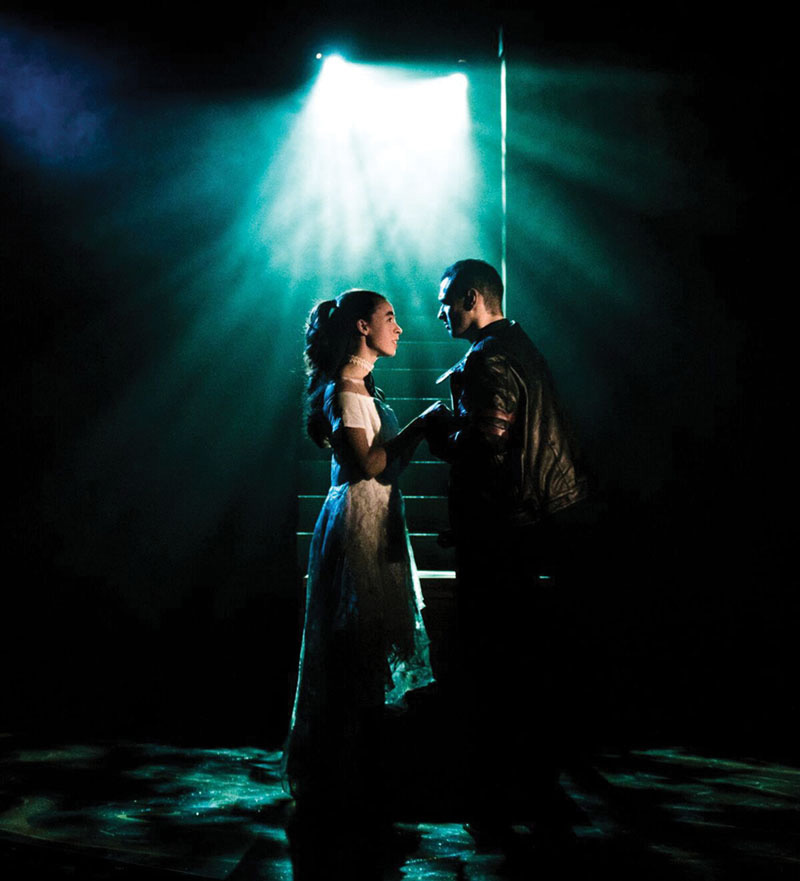 As the pious dove Inés, Del Corral ably projects the character’s unadulterated purity, buttressed by faith, and the pain that marks her first stinging exposure to the heat of romantic passion. The performance misses, however, the sense that Inés despairs not just in the knowledge that she might now be a sinner, but that she might also take pleasure in sinning. Del Corral captures Inés’ distress but not much of the lust or desire that fuels the girl’s struggle.

As Inés’ father, Don Gonzalo, Manolo Santalla assuredly captures the man’s distress at the thought of his child’s joyful light being extinguished by one so callous as Don Juan. Santalla also has a knack for locating the text’s moments of levity, as does Carlos Castillo, who delivers the evening’s liveliest performance in the dual roles of Don Juan’s right hand man, Cuitti, and the title character’s late father.

In the pivotal role of Inés’ scheming tutor, Brígida, Luz Nicolás is as prone to overemphasis as are the show’s dramatic cues of musical underscore, though she scores legitimate laughs. The performance is a definite statement, as much as the visual elements, or the play’s climactic tableaux of hell and heaven.

Much less definitive is the production’s landing of Don Juan’s final turn towards introspection and potential redemption. Throughout history, respective versions of the Don Juan legend have arrived at different endings for the hero, or villain, depending on the era and prevailing social climate. This Don Juan, while offering images of sheer beauty, and glimmers of poetic brilliance, plays at the game of love, without truly earning its heartfelt happy ending.

André Hereford covers arts and entertainment for Metro Weekly. He can be reached at ahereford@metroweekly.com. Follow him on Twitter at @here4andre.
← Previous Story Review: Studio’s “Skeleton Crew”
Next Story → Stage: Fall Arts Preview 2017