One can see the Washington National Opera’s point in choosing its Aida for the upcoming “Opera in the Outfield,” the company’s invitation to any and all to give opera a try via the big screen at Nationals Park. Aida is built in Cecil B. DeMille proportions with foreign wars, high-court drama, and not one, but two princesses in high personal distress. There are rafter-bending arias, vast choral tsunamis, and the potential for many feasts-for-the-eyes tableaux.

But like all epics — be they born of Hollywood or in the Opera House — the scale and grandeur must play host to a riveting and intimate human drama. In Aida, it is the love triangle between the young Egyptian officer Radames, the powerful Egyptian princess Amneris, and the captured princess, Aida. Unless the intimacy of these tortured hearts is conveyed, the unfolding consequences — written so large in this opera — are little more than pretty displays.

This rendering of Aida (★★★★), co-produced with the San Francisco Opera, Seattle Opera and Minnesota Opera, almost gets there.

Set against towering gray walls, the strikingly-colored hieroglyphics of concept artist RETNA seem to hold urgent but mysterious messages. As his symbol-scored panels turn fire-red to create a ceremonial hall or giant letters hunch like an alien race, the mood is stark and otherworldly. Intrinsically, it is pleasing.

But the challenge — and here, the disconnect — is the blending of this aesthetic with the larger concept of the production. This is where it gets trickier: If the sets live in abstract austerity, the costuming, especially the women’s kaftans, offer up a colorful ’70s vibe. Aida, enslaved by the Egyptians and in personal service to Amneris, is even more incongruent in Renaissance-style peasant garb. The Egyptian war room is strung with bars of fluorescent lights. These contrasts don’t exactly offend, but neither do they unify the vision.

The undercurrent of inconsistency carries over into some of the spectacle. When Radames is awarded Amneris in marriage (an offer he can’t refuse without insulting the King and revealing his secret love for Aida), the celebration of their betrothal may entertain, but the scene feels designed by committee. The choreography of its splendor is too methodical, while the dance going on around it feels unhinged and interminable. Much is diffused — and confused — by a final, overly long parade of incongruous, crudely wrapped wedding presents piled in front of the couple like a pyre. It all does too much and says too little.

It’s a sentiment that also applies to much of the dance, featured heavily in the opera’s many musical interludes. Although the first piece (which arrives behind a scrim containing an abundance of roiling mist) is effective, the rest are less than inspired. The dance should match the originality of the sets in suggesting the mystery of the unseen gods. Instead, the movements are largely predictable and derivative. The flashes of leg and fleshy bodysuits, arriving rather too obviously at the evening’s ebb, argue with the production’s strong sense of decorum.

And these struggles do rather beg the larger question of why it’s now so terrible to go traditional. Why not a bit of Liz Taylor’s Egypt, with towering sets, ankhs akimbo and full-on Nemes head gear? Going abstract and uber-modern may be accessible in some ways, but so is a magnificently evocative romanticization. Opera doesn’t even require it to be historically accurate.

The question might have less oxygen if the emotional core of this production was fully intact, but here, too, there is an unevenness. Tenor Yonghoon Lee cuts a noble and attractive figure as the young officer-turned leader Radames, but he has no visible connection with the object of his desire, Aida. Thus, his very dramatic and tension-filled portrayal seems to exist in a frenetic vacuum. It is angst-for-one, and we cannot truly share in it. Lee sings with much power and has no trouble ascending the orchestra (energetically conducted by Evan Rogister), but his tone grows harsh at times, despite some moments of pleasing tenderness.

This all leaves Tamara Wilson’s Aida somewhat emotionally adrift and her best scenes are those she can make her own, such as when she is alone or with her father, Amonasro. Wilson’s Aida is appealingly self-possessed — in love, but never simpering. It does make it somewhat hard to believe she would, in the end, so easily slip away in her lover’s arms, but it hardly matters; nothing can get in the way of her stunningly clear and beautiful soprano. Wilson’s is a voice that trips along in the stars, and she is the reason to see this Aida.

The other standout here is the truly memorable performance of Ekaterina Semenchuk as Amneris. Singing with round and velvety tones, Semenchuk delivers the earthly passion, expressing her woman’s intense rivalry with Aida, but even more so, her life-changing pain and regret. While Radames (who has betrayed his people for the love of Aida) awaits his fate, Semenchuk brings the strongest moments of pathos — raising her arms to her gods to beg in vain for his life. Though the scene is one of visual grandeur, it is exceedingly simple, and it finally creates that frisson between the vast and the intimate.

Another strong performance comes from an impressive Morris Robinson as high-priest Ramfis, singing with attractive power and giving his man a convincing concern and impatience with Amneris. As the imprisoned King Amonasro, Gordon Hawkins steals his scenes with show-stopping presence and much expressive singing. Finally, mention must be made of Frederick Ballentine, who in his brief moment as the Messenger, reveals a gorgeously shiny tenor.

You may come for the spectacle of Aida, but you will stay for the sopranos. 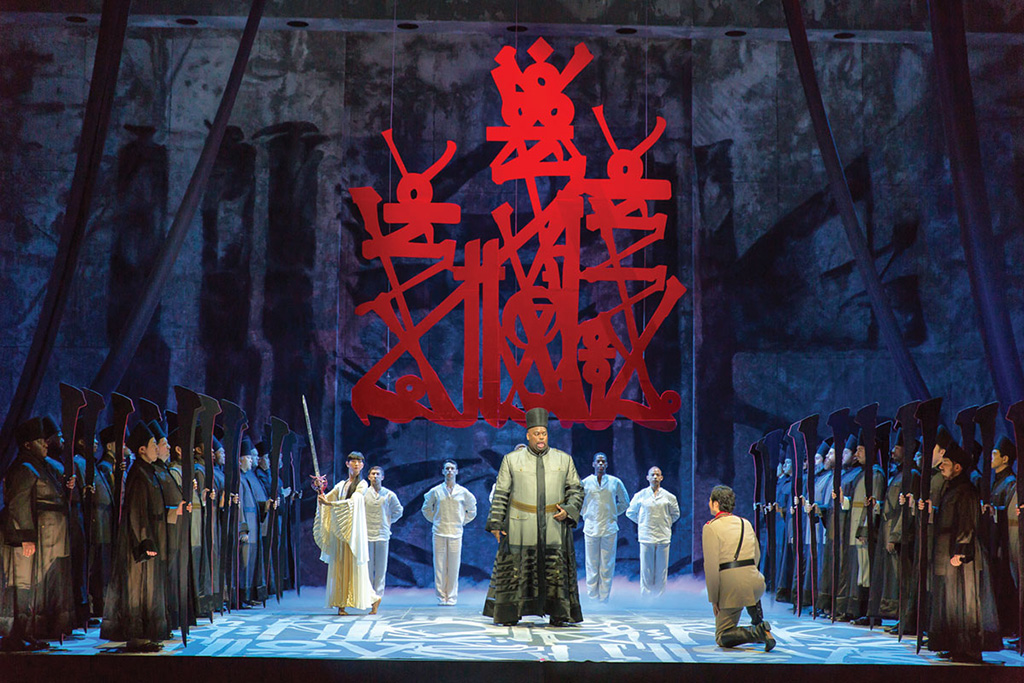