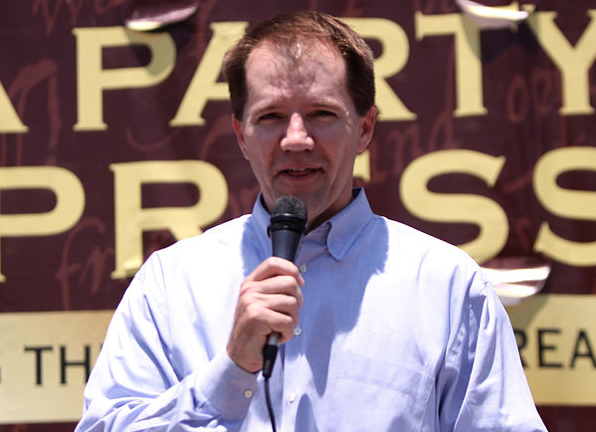 Civil rights advocates are objecting to yet another Trump judicial nominee being considered for a seat on a federal court of appeals. Don Willett, a justice on the Texas Supreme Court since 2005, has been selected by President Trump to serve on the 5th U.S. Circuit Court of Appeals, which is already among the most conservative circuit courts in the country.

The Leadership Conference on Civil and Human Rights, a coalition of more than 200 national human rights organizations, has written a letter to U.S. senators asking them to oppose Willett’s confirmation, accusing him of being unable to put aside his conservative bias when hearing cases. Because judges in Texas are elected, Willett has gone out of his way to campaign as an ideological conservative, bragging that he is the most conservative member of the arch-conservative Texas Supreme Court.

In his confirmation hearing on Wednesday, Sen. Sheldon Whitehouse (D-R.I.) grilled Willett about his campaign material boasting of his support from a host of conservative organizations in Texas, asking if that was evidence that Willett would be biased if appointed to the 5th Circuit.

Willett at first tried to paint the campaign material as necessary to simplify his message, given Texas’ geographic size and the difficulty of winning votes in over 254 counties, but then tried to explain that his messaging did not constitute a quid pro quo to rule a certain way on certain issues in exchange for political endorsements.

“I can certainly assure you it was not because I gave them any wink, or secret handshake, or pledge, or promise, or pre-commitment,” Willett responded. “I wasn’t describing myself that way….I was happy to have support from leaders of the conservative movement, including from this type of cause, that type of cause.”

Whitehouse also cited a 2010 speech given by Willett recalling his time serving as Deputy Assistant Attorney General in the Office of Legal Policy at the Department of Justice under the Bush administration. In that speech, Willett described how he’d coach judicial nominees to hide or obfuscate their views on legal issues in order to survive their confirmation hearings without creating controversy. Whitehouse then quoted Willett’s speech, saying: “[You said:] ‘We told our nominees to bob and weave, be the teeniest tiniest target you can be…[B]e as bland, forgettable and unremarkable as possible.’ How did you do today?”

Willett responded: “Senator, I think we are, sadly, long past the days of Justice O’Connor’s 99-0 vote in the Senate, or Justice Scalia’s 98-0 vote in the Senate…Justice Gorsuch, he called the confirmation process an ‘ideological food fight.’ … Things are different today.”

Sen. Ted Cruz (R-Texas) then attempted to explain the Texas judicial system and defended Willett, claiming that he has “rightly earned a reputation” as a “fair and impartial judge.”

Prior to Wednesday’s hearing, the Leadership Conference had knocked Willett for a 1998 memo he issued while working as an aide to then-Gov. George W. Bush that expressed antipathy towards women’s rights in the workplace, and skepticism towards complaints alleging discrimination or sexual harassment. The Leadership Conference says that these views make it hard to believe that Willett would uphold federal civil rights laws preventing such discrimination, including Title VII or the Lilly Ledbetter Fair Pay Act.

Willett has also taken to Twitter to disparage and ridicule the LGBTQ community, making fun of a transgender student who earned a spot on a girls’ softball team, tweeting, “Go away, A-Rod.” He also joked about oral arguments in the Obergefell case that legalized marriage equality by saying, “I could support recognizing a constitutional right to marry bacon.”

During Wednesday’s hearing, Willett was questioned by Sen. Al Franken (D-Minn.) about his “A-Rod” tweet about the transgender softball player, and he attempted to say it was a joke that “fell flat.”

“Senator Franken, that young woman is a gift,” Willett said. “She deserves respect and acceptance, and the tweet was an off-kilter attempt at levity that, admittedly, missed the bull’s eye. But it was never an attempt to disparage or demean her, in any way shape or form….It was meant to tie into Alex Rodriguez’s dropping of his lawsuit, and what would he do next during his year’s-long suspension?”

“I don’t entirely believe you,” Franken responded. “I think this was meant to be hurtful. I think it was meant to deride the young woman.”

Asked by Sen. John Kennedy (R-La.) if he would continue tweeting if appointed to the 5th Circuit, Willett hedged, saying he wasn’t sure, because he did see an educational benefit to tweeting and informing users about the Constitution, the courts, and the legal foundation of the country. He added that if he did continue, his tweeting would be less frequent and would largely be dedicated to “boosting and improving America’s civic education.”

Besides his intemperate tweeting, Willett was part of the Texas Supreme Court majority in Pidgeon v. Turner, a case in which the high court found that Houston did not have the right to grant marital benefits to employees in same-sex relationships, despite the Supreme Court’s holding in the Obergefell case. In another case, Willett delayed the application of the Obergefell case for 45 days, citing a Texas law that requires a court to give 45 days’ notice when a state law is challenged on constitutional grounds.

Willett was also among several judges on a short list of potential Supreme Court nominees given to President Trump by conservative activists at the Federalist Society and Heritage Foundation. All the judges on the list, including Willett, had to meet a litmus test that they would oppose abortion rights and gun safety laws if appointed to the court.

“[Justice Willett] has advanced a right-wing agenda throughout his career, both on and off the bench,” Vanita Gupta, the CEO of the Leadership Conference, concluded in the letter to senators. “Justice Willett lacks the impartiality and temperament necessary to serve as a federal judge.”

John Riley is the local news reporter for Metro Weekly. He can be reached at jriley@metroweekly.com
← Previous Story HRC urges defeat of 5 of Trump’s most anti-LGBTQ judicial nominees
Next Story → Victory Fund endorses 9 LGBTQ congressional candidates