By John Riley on November 9, 2017 @JohnAndresRiley 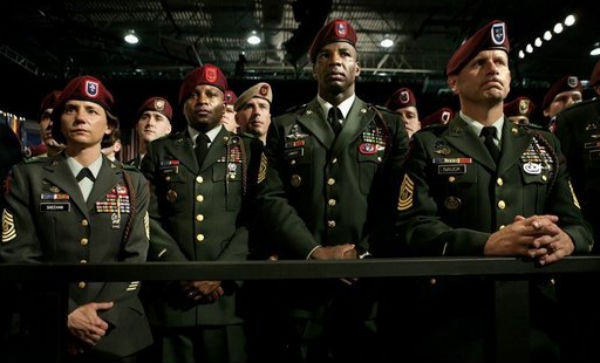 On Thursday, a federal judge in Baltimore heard arguments in a third of four lawsuits challenging the Trump administration’s policy of banning transgender military members from serving “in any capacity.”

Appearing before Senior Judge Marvin J. Garbis, a George H.W. Bush appointee to the U.S. District Court for the District of Maryland, the ACLU argued that the court should issue a preliminary injunction that would prevent the Trump administration, specifically the Pentagon, from carrying out Trump’s proposed ban on transgender service members.

“Today was another step on the road to ensuring transgender service members are given the equal treatment they deserve,” Joshua Block, a senior staff attorney with the ACLU’s LGBT Project, said in a statement following Thursday’s hearing. “We’re asking the court to reinforce what we already know to be true, which is that President Trump’s shameful, impulsive decision to ban transgender people from serving in the military is blatantly unconstitutional.”

The ACLU argued in court that the ban is unconstitutional because it violates the guarantees of equal protection and substantive due process under the Fourteenth and Fifth Amendments to the U.S. Constitution, as well as the statutory right to medical care that all service members enjoy. Lawyers for the plaintiffs argued that their clients are being unfairly singled out for disparate treatment based on their transgender status, not their ability to perform their jobs.

The ACLU also claims that the ban, or threat of one, is already endangering transgender military members’ employment and financial stability. Should the ban be implemented as intended on Mar. 23, 2018, their clients could be forcibly discharged and would have to look elsewhere for employment opportunities, while also losing their health care, retirement, and other military benefits. As such, the court should issue an injunction to prevent transgender military members from suffering “irreparable harm.”

“Trans service members like me have earned the privilege of continuing to serve our country so long as we continue to be fit for duty,” lead plaintiff Brock Stone said in a statement. “We are equal to the task, and it is our right to have an equal chance to take that task on.”

The Trump administration has asked Garbis to dismiss the lawsuit, claiming that, because the ban has not yet taken effect, the transgender military members don’t have standing to sue. They note that under the Pentagon’s interim guidance — which keeps the Obama-era “open service” policy in place — transgender service members will be able to re-enlist through February 2018. The government also rejects the contention that the ban is unconstitutional, as the Pentagon is still in the process of working out the details of how the ban will be enforced.

A federal judge in the District of Columbia has already issued a preliminary injunction halting the Pentagon from seeking to implement the ban until that lawsuit, known as Doe v. Trump, can be resolved. Plaintiffs in a second lawsuit out of California have made similar arguments to those made in the Doe and Stone cases in their legal briefs filed with the court, and are slated to appear in federal court to argue for an injunction on Nov. 20.