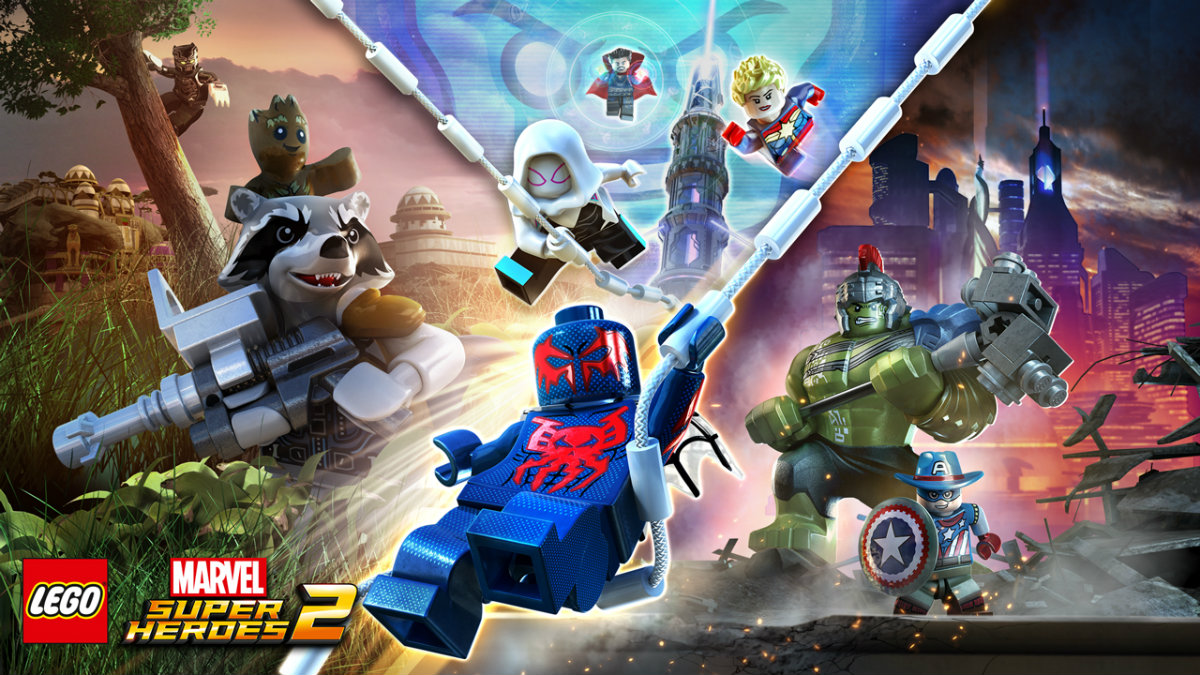 The Lego games have always held a peculiar position in the world of gaming. Their blend of simplified gameplay, bright graphics, and humor-laced storylines seem tailor-made to appeal to burgeoning young gamers. And yet, when you look back at some of the most successful titles in the franchise, it’s obvious that they’re also making them for adults. There’s pop culture references galore, blocky remakes of mature properties like Star Wars and Jurassic Park, and some of the gameplay tropes — advanced puzzling and collectibles gathering — associated with older gaming audiences.

Those two worlds, the young and the older, frequently mash against one another. In the best Lego titles, the simplified gameplay melds with superior storytelling to create a fun twist on a well-known property (Lego Star Wars: The Force Awakens). In the worst, lazy repetition and needless excess conspire to bloat the whole thing into a barely tolerable slog (Lego Marvel’s Avengers).

) looking to largely replicate that formula, what could go wrong? Quite a lot.

Unlike the last game, which used Manhattan as its hub and took players on a journey through various worlds in the Marvel franchise, Super Heroes 2 brings all of those worlds together. Kang the Conqueror has rampaged through various realities, stealing sections of each world he visits and turning them into one giant city, Chronopolis, over which he rules. There’s snippets of everything from Asgard to Hydra’s headquarters, ancient Egypt to Attilan, the Old West to Wakanda. There’s even three variants of New York City: present day, Noir, and Nueva York 2099 — each with their own version of Spider-Man.

It’s up to Marvel’s wealth of characters — hundreds of them — to fight back against Kang. There’s the Avengers, the Inhumans, the Guardians of the Galaxy, and others including Spider-Gwen (from a reality where Gwen Stacey was bitten by the spider), Iron Duck (Howard the Duck in Iron Man’s armor), and a cowboy Captain America. And that’s before you get to all of the supervillains — each promised a slice of the pie by Kang — you’ll battle along the way. (A notable omission from the sequel are the X-Men, present in the first game but missing here.)

Dollar for dollar, Super Heroes 2 offers a staggering array of content. In addition to the 18 locations present in Chronopolis and the 20 story missions that take place there, there’s side missions to do, hundreds of collectibles to gather, petty crimes to stop, statues to blow up, propaganda to alter, even cats to find — and more beyond that. Covering every last inch of Chronopolis and unearthing its myriad secrets will take you dozens of hours.

How you’ll feel after the first dozen hours, though, will likely depend on your tolerance for core Lego gameplay. I’ll admit, I’m a fan of the Lego games. Even last year’s Avengers title, which was one of the most tedious and sloppy in recent memory, wasn’t enough to break me. Unfortunately, Super Heroes 2 tests that patience even further. And it does so not because it’s worse than Avengers, but because, while that game settled for mediocrity, Super Heroes 2 constantly jumps between epic highs and crashing lows.

Starting with the highs, this is one of the most stunning Lego games ever — heck, even outwith the Lego franchise, the quality of Traveller’s Tales animations, texture work, scenery, and environments shames other developers. Sound design is almost uniformly excellent, from voice performances to sound effects to scoring. It can be slightly jarring hearing the characters talk with different voices if you’re used to the Marvel Cinematic Universe, but you’ll quickly adjust.

And what those characters are saying rarely fails to please. Not hemmed into following a specific story like Avengers, the Super Heroes games can offer grandiose originality. The narrative here is compelling — if a tad confusing, given its jumps between worlds and times — and the scripting is among the strongest of any Lego franchise. The humor lands consistently, especially in genius characterizations like Ms. Marvel, whose peppy optimism is a constant delight.

Where everything starts to fall apart is in actually playing the game. There’s one word that consistently came to mind while working through the story missions in Super Heroes 2: Busy. It’s so overstuffed with things to do and that players can frequently and easily become overwhelmed or confused. Quest markers aren’t always explicit and progression isn’t always obvious — do you break a random object to see if you can build something, or was there a cue you missed after coming out of a cutscene? More often than not, the answer is the former.

What’s more, while the core gameplay of smashing objects and building things still works, it’s showing its age more than ever, particularly given the game’s focus on combat, which has always been the weakest part of any Lego game. Characters are given a superb array of powers and abilities — all beautifully animated — but are then hemmed in by the same “mash a button” style of interaction as every other game. It isn’t helped by enemies that take much more effort to kill than in other Lego games, such as those with shields/additional powers/regenerating health. It makes fights — of which there are many — tediously repetitive. You’ll spend far too long mashing buttons to clear an area of enemies, only to enter the next and have to repeat it all again.

Once you reach the end of each level, you’ll engage in a boss battle. Great, you might think, as controlling a group of heroes as they take down Green Goblin, or Kingpin, or Ronan the Accuser sounds like excellent fun. Unfortunately, boss fights are just as slow as the rest of the game. Whether it’s artificially large health bars, constant shielding, endless waves of enemies, or poorly scripted requirements of things to build during the battle, boss fights just aren’t fun. There are a couple of bright moments, such as fighting Steel Serpent, which requires adept dodging and timing, all set in a beautiful, lava-filled arena, but these battles are the exception, not the rule.

Puzzles and exploration have always been preferable to fighting in Lego games, and it doesn’t help that much of Super Heroes 2 story mode feels unnecessarily padded — such as deliberately slowing character movement or adding in yet more invulnerable enemies to stretch out the length of each level. Given how much other content is available elsewhere in the game, it’s just not needed. Even sitting through the end level screen, which details your accomplishments, can’t be skipped through. It’s as if Super Heroes 2 is constantly trying to run out some lengthy, imaginary clock.

In free roam, Super Heroes 2 starts to redeem itself. Web-slinging through New York, flying over the floating city of Attilan, or romping through Sakaar feels closer to the game Super Heroes 2 should have been. Freed from the constrictions of the story mode’s limited spaces and tight camera angles, exploring the city, unearthing its secrets, and completing the frankly obscene amount of side quests and collectible missions — as well as races, character quests, and mini boss battles — is the best part of Super Heroes 2. Here, the characters feel more able to use their powers, and the ability to swap on-the-fly between heroes to solve environmental puzzles remains as addictive as ever… right up until the whole thing freezes.

As of now, Lego Marvel Super Heroes 2 is not a stable game. During my review period it crashed multiple times — sometimes in Chronopolis, sometimes during story missions (though usually in cutscenes for the latter). The frequency of these crashes, which involve the whole game freezing up and resetting, mean that you will constantly lose progress, especially if it happens during a cutscene, as the the game saves after the cutsene has finished.

Couple with a few game-breaking moments, such as a necessary conversation prompt not loading, and the technical problems only add to the frustrations that arise from other aspects of Super Heroes 2 — and tarnish the parts that really shine. Here’s an example: Deep into the game, you’ll explore an Egyptian tomb on your way to fighting N’Kantu the Living Mummy. It’s one of a few levels that put fighting on the back burner in favor of puzzling and platforming, and is a joy to play through — right up until the game crashed as it loaded the boss battle with N’Kantu. While Ancient Egypt was a level I enjoyed, having to redo my entire progress immediately ruined the experience for me. And when it happens in more tedious levels, the game becomes an absolute chore.

That, really, is the big takeaway from Super Heroes 2. How much of the game you will ultimately see depends on your level of tolerance for its various foibles. For every compelling cutscene, or engaging character exchange, or genuinely challenging puzzle, there’s a laborious boss fight, or technical hitch, or needlessly complex series of builds required to advance through a small portion of a level.

Lego Marvel Super Heroes 2 is a game of constant compromise, between fun and tedium, smart design and obvious flaw. Take Battle Arena mode, which lets you pick a hero and go head-to-head with friends. It’s a genuinely fun addition, and the various arenas are great. The tradeoff? Standard co-op multiplayer — a hallmark of Lego games — just doesn’t work as well, because, as busy as the game is in single-player, it’s even more confusing and obtuse with only half a screen at your disposal. I tried playing with a friend, one who love the first Super Heroes game, and he asked to stop after just two story missions.

I realize that’s a particularly specific and personal example, but it’s evidence of a bigger problem here. Maybe it’s the Lego franchise finally starting to show its age, its ideas wearing perilously thin in a game that relies so heavily on combat.

Or maybe it’s because, as bad as some parts of this game are (don’t get me started on the obtuse camera movement when flying), there are glimmers of a truly outstanding adventure here, one freed from the being a “Lego” game and instead allowed to be a “Marvel” game. Hundreds of characters, great narrative, and a wealth of powers on-hand as you save the universe? It’s the game Lego Marvel Super Heroes 2 promises, but one the Lego part ultimately fails to deliver.

Lego Marvel Super Heroes 2 retails for $60 and is available now on PlayStation 4, Xbox One (as reviewed), and Nintendo Switch, and $40 on PC.