By John Riley on December 1, 2017 @JohnAndresRiley 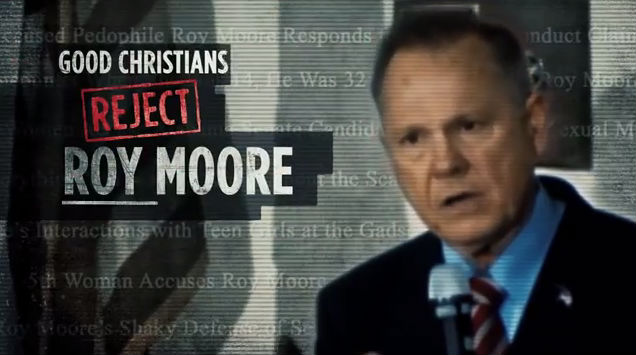 The Log Cabin Republicans have released a digital ad online calling on Republicans in Alabama to vote against GOP nominee Roy Moore in the upcoming U.S. Senate election on Tuesday, Dec. 12.

“There is a war on Christianity happening right in our midst,” a female narrator intones as shots of people praying together and reading the Bible. “Morals are decaying. The very fabric of America is being torn apart. Politicians are attacking our values. Our churches. Our children.

In releasing the ad, Log Cabin is borrowing the frame and language that has used by Moore in his speeches attempting to appeal to religious conservatives by railing against homosexuality, abortion, and other “sins,” or behaviors Moore considers immoral.

Moore’s campaign was temporarily rocked by accusations from several Alabama women claiming that Moore pursued them romantically when they were teenagers, the youngest being 14 when she alleges that Moore groped her, undressed her, and made her touch him through his underpants.

Despite calls from Republicans in Washington, D.C., to step aside, Moore refused to exit the race — forcing Alabama Republican voters to choose between electing somebody who is ideologically similar to them or rejecting him because of his alleged pursuit of underage women.

Although Democratic candidate Doug Jones temporarily surged in the polls following the initial string of accusations, recent polling has shown Moore leading Jones by five to six points, indicating that Alabama Republican voters are circling the wagons around Moore. A poll by Louisiana-based JMC Analytics and Polling showing Moore with a five-point lead also found that 34 percent of people said the accusations made no difference in their support of Moore. Thus, in a state as Republican as Alabama, Moore is likely to win in spite of the allegations against him.

Moore has continued to insist he is innocent, and that the accusations against him are part of a conspiracy by establishment Republicans and the political left to undermine his candidacy. On Wednesday, Moore railed against the “liberals” who are opposing him and tried to marshal Alabama Republicans and social conservatives by claiming their values are under attack from outsiders — precisely the same type of rhetoric used in Log Cabin’s ad.

But Gregory T. Angelo, the president of the Log Cabin Republicans, is warning his fellow Republicans that a Moore victory could be more problematic for the GOP than the potential — and likely temporary, given Alabama’s partisan leanings — loss of a Senate seat.

“If Moore is elected, the press would attempt to make him the national face of the GOP, inviting his theocratic commentary on every issue you could imagine — and Moore would gladly take them up on their offers every single time,” Angelo says. “Republicans across the country — up and down the ticket — will be asked if they agree or refute the latest of Moore’s ravings. This would complicate passage of president Trump’s legislative agenda and the 2018 midterms in innumerable ways.”