By Randy Shulman on December 7, 2017 @RandyShulman 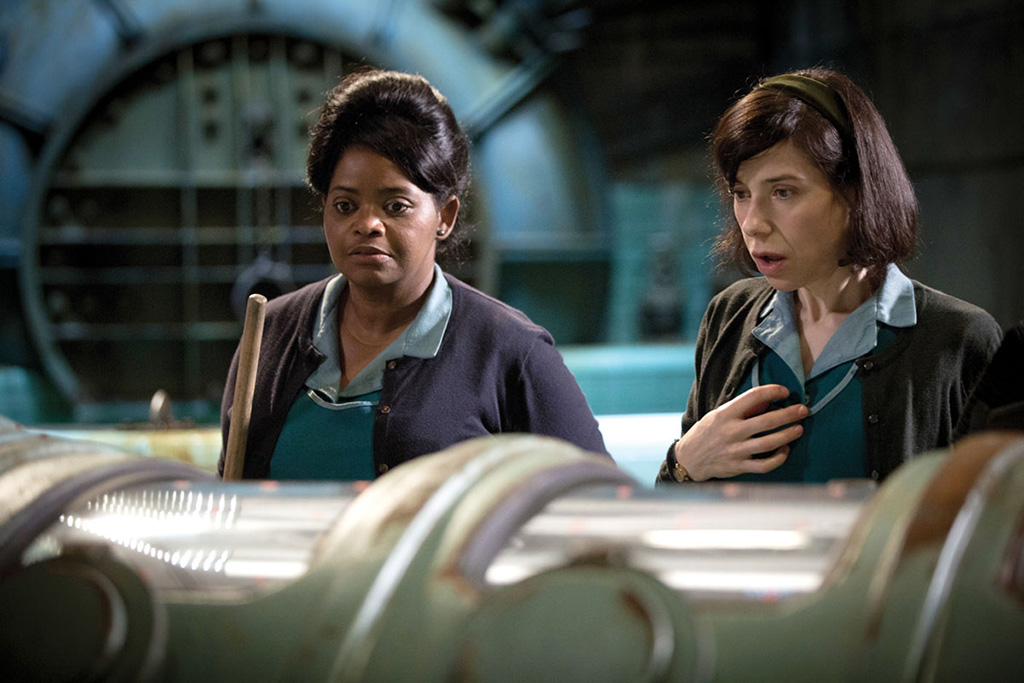 As for examples: Both Hellboy films are good. Pacific Rim is best left forgotten, as is his blitheringly idiotic television series, The Strain. But Pan’s Labyrinth — well, that was great. Perhaps greatest of all. Nearly everything del Toro has made since has been held against that 2006 masterpiece of dark fantasy amid an even darker reality.

So where does that leave The Shape of Water (★★★★), del Toro’s eagerly anticipated homage to creature features of the ’50s? Somewhere between good and great. It’s not quite fully formed, even though it feels complete while you’re experiencing it. But for all its luxurious camera work and deep, resonant performances, the movie is just this side shy of fully blowing you away. It misses its mark by an inch.

Still, it comes close enough. And if this mash-up of the 1954 chiller Creature from the Black Lagoon with good old-fashioned movie musicals isn’t enough of a wild and wondrous mix for you, well, let’s have some From Russia, With Love thrown in for good measure.

On top of the film’s core romance between a silent beauty and an amphibious man, del Toro layers on social outrage that, sadly, is more relevant in today’s world than when he likely first penned the screenplay. Yet, even the social commentary is, on reflection, window dressing — rude, inappropriate utterances tossed in to make audiences gasp (and gasp we do), recalling a time not so long ago when African American people were treated by some as less than human and gays were on a rung one step lower.

If the magnificent, hulking Amphibian Man — and yes, it is a man, we soon discover — at the center of the story is a metaphor, he’s an awfully magnificent one, beautifully, elegantly, expressively portrayed by Doug Jones, who has made a career of acting under massive wads of latex. The tangibility of the creature — and the poignant veracity of Jones’ performance — is just another example why sometimes it’s better to go with real than bits and bytes. All the performance majesty Andy Serkis brings to his CGI-capture roles doesn’t hold a candle to the expressiveness Jones brings to a mask molded from one-inch thick rubber. 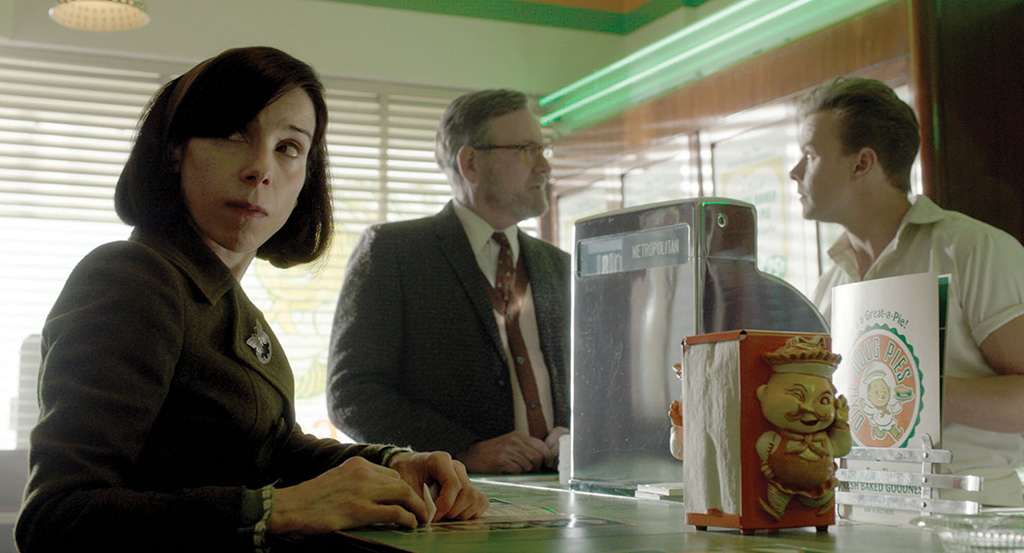 The Amphibian Man is, naturally, misunderstood by its sadistic, immoral captor, Richard Strickland (Michael Shannon, in a performance of blazing intensity), who calls the creature “an affront,” and fails to see it for the rare, unique being that it is. Such has often been the case with classic movie monsters, and with the exception of Frankenstein, most are viewed as murderous beings that feed off human blood (Dracula), flesh (Wolfman), or revenge (Mummy).

The Shape of Water skirts all that by redefining who, in fact, the movie’s real monsters are. The movie glides, waltz-like and with elegance, toward a conclusion that, while not wholly unanticipated (it’s virtually telegraphed from the opening shot), is at least deeply satisfying and emotionally fulfilling. Del Toro leaves several questions unanswered — mysterious scars on a character’s neck point to signs of childhood abuse, but might be something else — and leave the notions for audiences to feast upon later. He’s the kind of director who knows not only which buttons to push, but the precise placement for those buttons and exactly when to push them.

That awakening, of course, transpires with the Amphibian Man, and the emergence and development of their romance is as natural and guileless as those that have developed between on-screen lovers since moving images were first committed to celluloid. The difference here is that instead of running from the monster, Eliza runs toward it, assuredly and seductively. “He doesn’t know what I lack, or that I am incomplete,” she signs to Giles, in an effort to convince her reluctant neighbor to help steal the lab’s “most sensitive asset ever.” The bond between Elisa and the Amphibian Man is forged in boiled eggs and the music of Glenn Miller. They were clearly destined to find one another, and del Toro plants seeds to bolster his case for their unexplained attraction. In his eyes, they’re soulmates, pure and true. Love for this pair is secondary to the need they have for one another, two solitary beings that find strength in union and peace in one another’s embrace.

A subplot involving a Russian spy whose mission it is to kill the creature at first feels a bit like a MacGuffin. “We don’t need to learn,” his handler says with the kind of ominous portent ripped from cold war spy movies of the early ’60s. “We need the Americans not to learn.” But the subplot serves a mechanical purpose by giving Elisa and her work friend Zelda (Octavia Spencer, delightfully smart and sassy) a means of getting the creature out of the lab. The character also provides the movie with one of two unbearably grisly, squirm-inducing moments.

Set in 1962, the movie is rich with symbolism — much of it derived through del Toro’s fastidious eye for design and color, including various shades of green and, after romance blooms, warm, glowing reds. Del Toro is gifted at making the unimaginable seem, if not commonplace, then at least remotely plausible. Things happen that defy description, and yet the director, who has said that he made The Shape of Water because he wanted to see the monster finally get the girl, brings a romantic closure to the creature features of yore. Maybe the Creature from the Black Lagoon wasn’t a murderous, monstrous beast after all. Maybe he was just horny.

The Shape of Water is rated R for violence, language and sexuality of an altogether different kind. Opens Friday, Dec. 8, at area theaters.

Randy Shulman is Metro Weekly's Publisher and Editor-in-Chief. He can be reached at rshulman@metroweekly.com.
← Previous Story Review: Justice League is an overstuffed turkey
Next Story → Review: Tom of Finland