Senate confirms anti-gay judge who was rated “not qualified”

Leonard Steven Grasz has been granted a lifetime appointment to the 8th U.S. Circuit Court of Appeals

By John Riley on December 13, 2017 @JohnAndresRiley 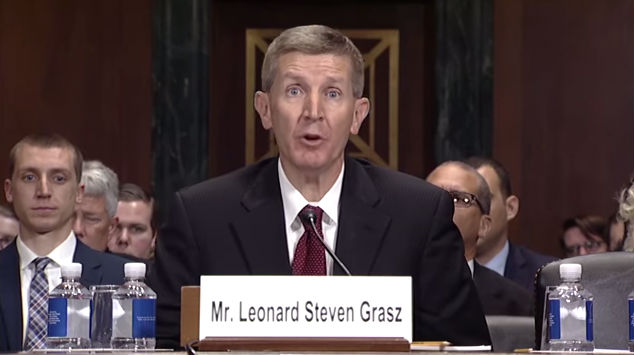 The U.S. Senate has confirmed a Trump judicial nominee with a history of anti-LGBTQ animus who received a unanimous “Not Qualified” rating by the American Bar Association.

Senators voted along party lines, 50-48, with two abstaining, thereby confirming Leonard Steven Grasz, the former director of the board of the anti-gay Nebraska Family Alliance, as a justice on the 8th U.S. Circuit Court of Appeals.

Despite concerns raised by Democrats and LGBTQ advocates about his apparent lack of qualifications, his past anti-LGBTQ advocacy, a personal bias rooted in religious beliefs, and his inability to impartially judge cases on their merits, Grasz’s nomination was approved with seeming little resistance.

Grasz’s defenders have claimed that the ABA rating was motivated by partisan hatred, despite the fact that other objectionable Trump nominees — whatever their shortcomings — were rated “Qualified” or higher by the ABA.

Critics also pointed to his work at the Nebraska Family Alliance opposing the recognition of same-sex marriage, attempting to deny same-sex couples benefits, opposing efforts to ban anti-LGBTQ discrimination, and advocacy for religious exemptions for business owners opposed to homosexuality as evidence of what they felt was his inability to impartially deal with cases involving LGBTQ plaintiffs or defendants.

“We are deeply disappointed that Senate Republicans have voted to confirm a nominee who is clearly unfit to serve as a federal judge,” David Stacy, the government affairs director at the Human Rights Campaign, said in a statement. “Grasz’s confirmation is in line with the Trump-Pence administration’s alarming trend of advancing under-qualified nominees with terrible anti-equality records. This radical ideological transformation of our justice system will lead to long-term, harmful consequences that will live well beyond the Trump-Pence administration.”

Vanita Gupta, the president and CEO of The Leadership Conference on Civil and Human Rights — who previously served as the head of the Department of Justice’s Civil Rights Division — excoriated Republicans for “rubber stamping” Grasz’s nomination and allowing “an extreme and highly troubling” nominee to be confirmed.

The Leadership Conference previously sent a letter to senators urging them not to confirm Grasz, arguing that he is not qualified to be a judge.

“Mr. Grasz is only the fourth nominee since 1989 to receive a unanimous Not Qualified rating from the American Bar Association,” Gupta said in a statement. “This rating was based on the nominee’s local reputation for bias, lack of open-mindedness, and offensive demeanor. A person with those qualities should not serve a lifetime appointment on the federal bench.”