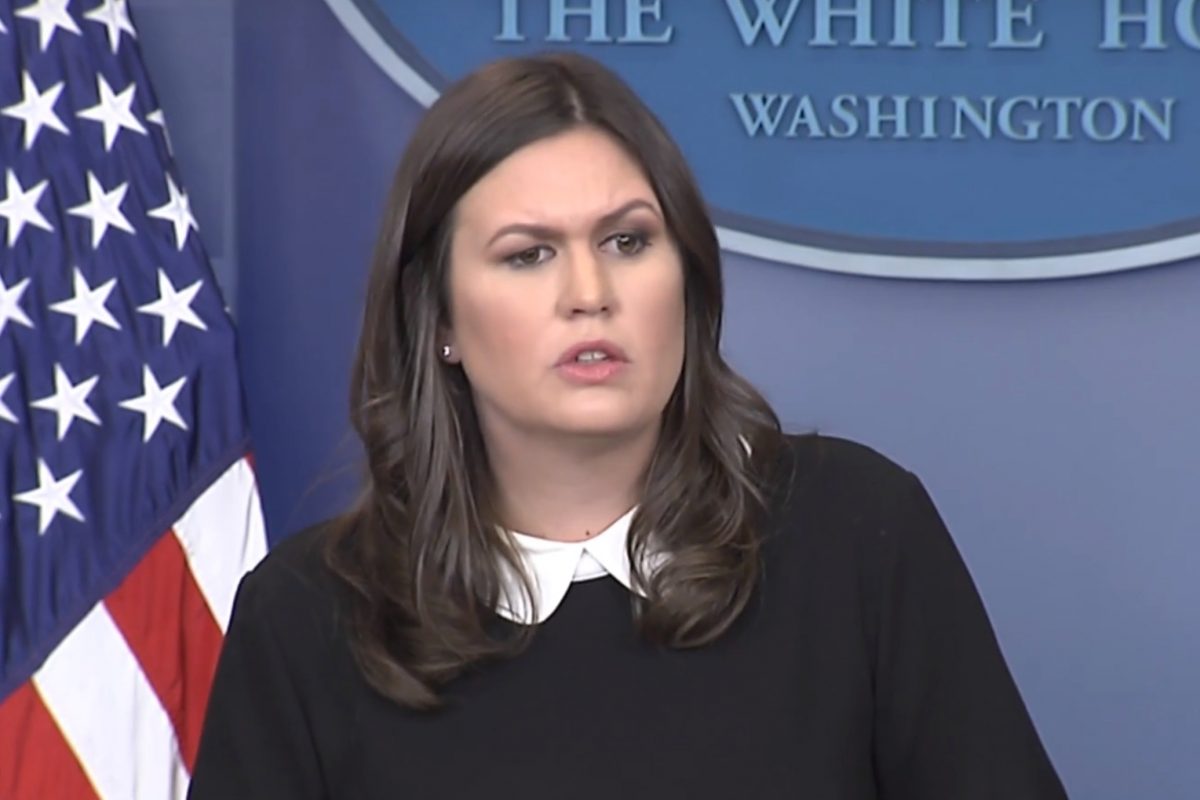 It came after oral arguments started earlier today at the Supreme Court in the Masterpiece Cakeshop case, which questions the legality of a baker refusing to bake a cake for a same-sex wedding.

Trump’s Solicitor General said at the Supreme Court that, should the baker prevail, it would be legal to put a sign in a bakery window informing same-sex couples that they would be refused service. Sanders was asked if Trump supports that outcome.

“The President certainly supports religious liberty,” she said. “And that’s something that he talked about during the campaign and since upheld since taking office.”

Asked to clarify if that included signs in windows, she said, “I believe that would include that.”

.@PressSec says that @realDonaldTrump's support of "religious liberty" would include a baker putting a sign in the window saying, "We don't bake cakes for gay weddings" #MasterpieceCakeshop pic.twitter.com/BES376f2V8

GLAAD shared the exchange, then tweeted to the Alliance Defending Freedom, who are defending Masterpiece Cakeshop owner Jack Phillips, saying, “Now, tell us again how this isn’t about discrimination.”

Now, tell us again how this isn’t about discrimination @AllianceDefends?

We’ve been saying all along that the #MasterpieceCakeshop case is not about cake or “religious freedom.” It’s about anti-LGBTQ discrimination, plain and simple. https://t.co/u7oo2Q2ddk

“The Department of Justice will pretend that this case is not about discrimination as they argue in front of the Supreme Court today, but that could not be further from the truth. While freedom of religion is paramount to our nation’s success, it does not give anyone the right to impose their beliefs on others, to harm others, or to discriminate,” Ellis said. “There is no sugar-coating the blatant and ugly agenda to discriminate against LGBTQ people at the core of this case, which is about seeking religious exemptions from non-discrimination laws for the singular purpose of refusing service to people simply because who they are.”

LGBTQ community faces off against pro-discrimination rally at Supreme Court

Why do these people even give a shit who they bake a damn cake for?

Didn’t we already go over this? “Religious Liberty” was cited in these cases too… pic.twitter.com/vj69DYGgux

Subsitute the word “black” for the word “gay”. Would Trump support that too?

Catch up on all of our coverage of the Masterpiece Cakeshop case here.

Rhuaridh Marr is Metro Weekly's online editor. He can be reached at rmarr@metroweekly.com.
← Previous Story WATCH: Anti-gay Republican caught on police camera with 17-year-old male prostitute
Next Story → Dueling rallies: The LGBTQ community faces off against homophobes at Supreme Court