By John Riley on November 29, 2017 @JohnAndresRiley 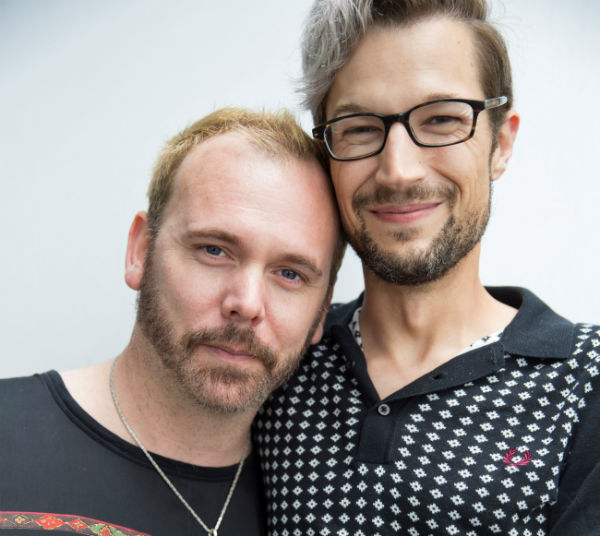 The gay couple at the center of the Masterpiece Cakeshop Supreme Court case warned that there could be drastic implications for civil rights if the court rules against them.

At the heart of their case is whether it was legal for Masterpiece Cakeshop owner Jack Phillips to refuse to bake a wedding cake for the couple, citing his religion as the reason for his objection.

They and their allies asserted that businesses that open themselves up to the public should not be able to discriminate against people based on their sexual orientation.

“The bakery seeks a constitutional right to deny equal service, in violation of Colorado’s anti-discrimination act. But the Supreme Court has never accepted that theory,” Ria Tabacco Mar, a staff attorney with the ACLU’s LGBT & HIV Project, which is representing the couple, said on the conference all. “It has rejected the constitutional ‘right to discriminate’ claims of entities ranging from lawsuits to labor unions, to private schools and universities, to restaurants and hotels. Retail bakeries should fare no differently.”

Mullins said that he and Craig were “mortified and humiliated” when Phillips refused to even talk about baking a cake for them after finding out they were looking for a cake for a same-sex wedding. Craig says they felt “helpless” after being turned away from Masterpiece and even shed some tears over the incident while Craig’s mother, Debbie, comforted them.

“Growing up in a small town in Wyoming, I always felt like I needed to be on guard because of the harassment I experienced on a day-to-day basis. Denver was my escape because I felt more free to express who I am,” Craig said. “On that day, I let my guard down — especially because I had my support system with me — so it was particularly saddening for me because I left myself open.

“To this day, Dave and I still feel nervous when we go into businesses. We really have to think hard about whether we want to expose that we’re a married couple, or if we can even show each other affection, because we’re nervous that we may be denied service for who we are,” he added. “In the end, all we’re asking for is the freedom to participate equally in public life, and to receive equal treatment in places of business.”

Participants in the call attempted to poke holes in arguments put forth by both Phillips’ lawyers and the Department of Justice that custom cake baking and designing is a constitutionally protected First Amendment activity.

As a result, Phillips’ lawyers argue, their client and others with beliefs opposed to homosexuality should be exempted from following public accommodations laws like Colorado’s, which prohibit discrimination based on sexual orientation and gender identity.

But Mar argued that the arguments advanced by opponents of LGBTQ rights, many of whom are backing Phillips, are red herrings.

“No one disputes that cakes can be artistic. But discriminating against customers while selling an artistic product has nothing to do with the freedom of speech,” she said. “The anti-discrimination act does not tell the bakery how to make its cakes. It does not even require the bakery to make cakes at all. The law simply says that if the bakery decides to offer a product to the public at large, it can’t refuse to sell that same product to a customer because of her race, religion, sexual orientation, or other aspects of her identity.

“The fact that the bakery’s refusal is based on its owner’s religious beliefs does not excuse its discrimination either,” Mar added. “Religious liberty is one of our most cherished freedoms. But it does not give anyone the right to harm others in violation of a generally applicable state law.”

Obergefell, who recalled his own battle in the courts to have his marriage to his late husband recognized, pushed back against the idea that baking a cake for a same-sex wedding somehow constitutes an “endorsement” of a practice, as many social conservatives have claimed.

Ineke Mushovic, the executive director of the Movement Advancement Project and the Open to All Campaign, said a decision against Craig and Mullins could have potentially devastating and far-reaching consequences. She pleaded with news media to stress the fact that the case is about far more than cake-baking or so-called “artistic expression,” and to put into context how radically a Supreme Court decision in favor of Phillips would alter the political landscape.

“The challenge with this case is it really doesn’t look that dangerous, so people aren’t getting informed or outraged, and that is exactly what our opponents are counting on,” Mushovic said. “If we lose, the far right is going to gain a constitutional right to discriminate, and that’s going to be something we can’t undo with a legislative fix. Not only that, but that right [to discriminate] could extend to a whole lot of different kinds of businesses, and could affect a whole lot of different kinds of people. This case could chip away at the foundation’s of our nondiscrimination laws.”

Mushovic acknowledged that many, even on the political left, are often skeptical of claims that allowing anti-gay discrimination would result in policies, laws, or court decisions that allow discrimination against people based on other characteristics, such as race. But, she warned, we should not take societal norms for granted, particularly given the current political landscape.

“Part of what many people are counting on is that the [Supreme] Court will continue to say that it’s not okay to discriminate based on race, because it would be culturally unacceptable to do anything different,” she said. “What I would challenge us all to think about is the cultural fabric and the cultural landscape that we are living in at this moment, in a country that is trying to build a wall, that’s trying to ban Muslims, where, when white supremacists commit murder, we blame the protesters, where the Supreme Court had gutted a key part of the Voting Rights Act. And then take that and imagine what could happen if the Trump administration appointed another Supreme Court Justice. So this case is very dangerous.”

The Supreme Court will hear oral arguments in the Masterpiece Cakeshop case on Tuesday, Dec. 5. Ahead of that hearing, more than 50 organizations have released a statement of principle backing Craig and Mullins and calling on the Supreme Court to affirm the right of all Americans to live free from discrimination.

Signatories to the statement include the Leadership Conference on Civil and Human Rights, the National Black Justice Coalition, and Planned Parenthood Federation of America, in addition to leading LGBT rights organizations like GLAAD, Lambda Legal, the Human Rights Campaign, the National Center for Transgender Equality, and the National LGBTQ Task Force.

Grimm, who became famous after suing his local school board over the right to use the boys’ restroom at his high school, said Craig and Mullins’ case is “no more about cake than mine is about a bathroom.” He said the issue is really about whether LGBTQ people are allowed to exist and live in public life, or whether they will be forcibly relegated to the sidelines simply because of their sexual orientation or gender identity.

“The LGBT community has been facing discrimination for its entire history, and this is an example of that,” he said. “This is just a more modern way of saying, ‘Your kind is not welcome here.’ That message is not new, and it is not acceptable.”

John Riley is the local news reporter for Metro Weekly. He can be reached at jriley@metroweekly.com
← Previous Story WATCH: Indiana congressional candidate touts support for marriage equality in ad
Next Story → LGBT groups warn against confirming Grasz and Norris to federal bench