By John Riley on January 19, 2018 @JohnAndresRiley 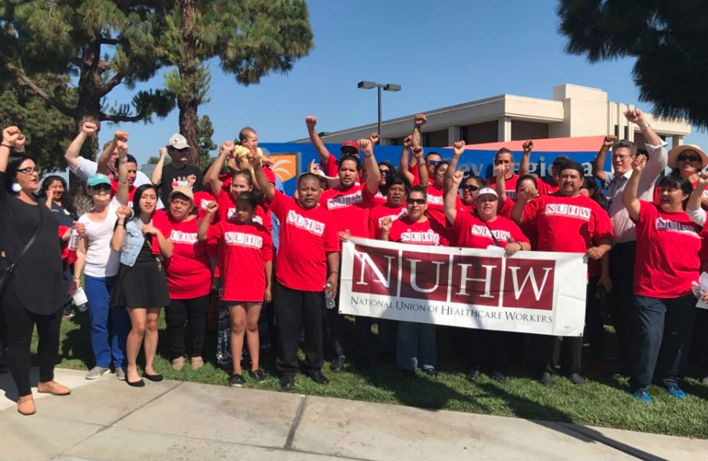 The National Union of Healthcare Workers is blasting the creation of a “Conscience and Religious Freedom Division” within the U.S. Department of Health and Human Services’ Office for Civil Rights.

The newly created division is designed to ensure that health care workers are not forced to treat women seeking abortions, transgender individuals, or people living with HIV if they have moral or religious objections to a patient’s lifestyle or life choices.

The division will particularly be concerned with enforcing a new HHS rule, introduced on Friday, that allows health care professionals to exempt themselves from performing certain procedures like abortion or gender confirmation surgery, or prescribing certain treatments that encourage sexual activity outside of heterosexual marriage.

Sal Rosselli, the president of the NUHW, called the creation of the new division a “cynical attempt to discriminate against gays and lesbians, transgender people, women exercising reproductive rights, and the option to fill in the blank with whatever you may fear.”

“We’ve seen this script before,” Rosselli said. “I live in San Francisco. During the height of the AIDS epidemic, in my city and elsewhere, prejudice prevented some AIDS patients from being properly cared for. I never want to see that again.”

The division will conduct compliance reviews, audits, and other actions to guarantee that hospitals are not forcing so-called “conscientious objectors” to violate their beliefs, even if those beliefs fly in the face of oaths that health care professionals take to provide care to all those who seek it.

Rosselli says it’s also a solution in search of a problem.

“In three decades of representing hundreds of thousands of workers employed in medical facilities, I can’t recall ever having to defend someone disciplined for refusing to provide health care on religious or moral grounds,” he said. Instead, again and again, I have needed to defend caregivers who suffered retaliation from their employers for blowing the whistle on understaffing or mismanagement at their facilities. What we need from the federal government is more protection to advocate for our patients, not to discriminate against them.”

Lambda Legal, which denounced the creation of the new Conscience and Religious Freedom division, called out the Trump administration for “weaponizing the HHS Office for Civil Rights,” particularly against the LGBTQ community and people living with HIV.

“When the Trump administration rolled out its new HHS division yesterday, we warned that its purpose was to facilitate discrimination,” Camilla Taylor, the acting legal director of Lambda Legal, said in a statement. “We were right.

“Today’s proposed rule represents nothing less than our own government attacking LGBT people, everyone living with HIV, women and many others in urgent need of health care,” Taylor added. “It turns the Hippocratic Oath into the Hypocritical Oath and violates the most basic tenets of medical ethics. It is a prescription for discrimination.”

Taylor noted that the rule doesn’t just protect health care providers who express religious objections to certain procedures or treatments, but any “moral” objection — an ambiguous term that is not very clearly defined and subject to various interpretations.

“Under this proposed rule, health workers would not only get to refuse to provide care themselves; they will be protected even when they refuse to give a patient a referral,” Taylor said. “The goal of this proposed regulation is to allow health care institutions funded by taxpayer dollars to keep their federal funding and accreditation even though they are violating laws that prohibit discrimination and violating medical ethical rules that also forbid such discrimination.”

She also noted that the proposed rule could be interpreted to allow providers to prescribe and practice conversion therapy on minors.

Other LGBTQ groups previously denounced both the creation of the new division and the introduction of the new rule, with many noting that the changes were announced the same week as the National March for Life, which brings hundreds of thousands of anti-abortion opponents to Washington to protest the Supreme Court’s decision in the 1973 Roe v. Wade case, which legalized abortion. As a result, many advocates feel the decision is politically motivated, in order to appeal to the political Right.

The rule could also have a disproportionate impact on the reproductive health care decisions of women of color, according to a new report by Columbia University. In 19 of the 34 states highlighted in the study, pregnant women of color are more likely to seek care from health care facilities, such as Catholic-run hospitals, that are already bound by “Ethical and Religious Directives for Catholic Health Care Services.” The new rule, which is weighted in favor of religious objectors, is likely to exacerbate that situation.

Americans United for Separation of Church and State, a secular progressive coalition, promised legal action, just as many of the coalition’s LGBTQ allies, including Transgender Law Center, already have.

“The Trump administration is taking yet another step to elevate the religious beliefs of health care providers above the medical needs of patients,” Maggie Garrett, legislative director of Americans United, said in a statement. “The rule puts patients’ health and well-being in jeopardy and could cause serious harm to those denied critical and lifesaving care.

“Women and LGBTQ patients are clearly the target of today’s discriminatory rule, but its reach goes even further and could negatively affect the health care of many others,” Garrett added. “Religious freedom is fundamental, but so is the right of patients to access the health care they need. This rule betrays both. No one should be denied lifesaving health care because of someone else’s religious beliefs. That’s just plain discrimination.”

John Riley is the local news reporter for Metro Weekly. He can be reached at jriley@metroweekly.com
← Previous Story Washington State Senate votes to ban conversion therapy
Next Story → At least eight transgender recruits have applied to enlist in Air Force