Decision not to hear case means plaintiffs must restart case, finding victims injured by law since it took effect in October

By John Riley on January 8, 2018 @JohnAndresRiley 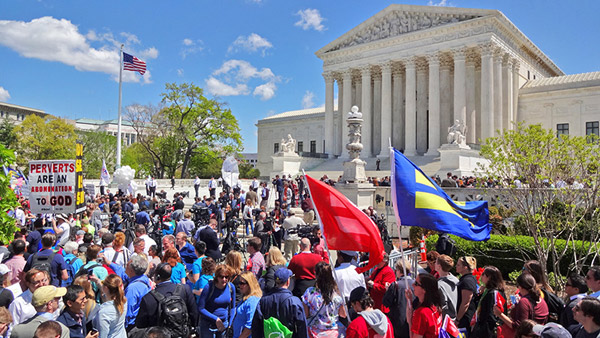 The U.S. Supreme Court has refused to hear a challenge to a Mississippi law allowing people, businesses and government employees to deny service to LGBTQ people based on their religious beliefs.

The court’s decision allows the law, HB 1523, to remain intact, and bolsters a decision by the 5th U.S. Circuit Court of Appeals, which earlier dismissed the lawsuit.

That court found that the plaintiffs did not have standing to sue because they had not suffered injury from the law.

The law had previously been halted from going into effect by a federal judge who ruled that it violated both the First and Fourteenth Amendments to the U.S. Constitution. Following the 5th Circuit’s decision, the law went into effect in October 2017.

What this means is that LGBTQ advocates can file another lawsuit challenging the law in the future, but must find plaintiffs who can prove they were negatively affected by the law’s provisions.

As written, the law allows individuals, businesses, and even representatives of the state to refuse service to LGBTQ people so long as they claim their refusal is based on sincerely held religious beliefs that marriage is an institution between one man and one woman, that sexual relations are “properly confined” to marriage, and that gender is fixed and determined by one’s physical sex at birth.

GLAAD decried the high court’s refusal to hear the case, arguing — as other LGBTQ advocates have — that a law that will have negative effects on the community should not have to take effect before it can be permanently halted or overturned.

“This latest punt on LGBTQ rights by the nation’s highest court promotes state-sanctioned discrimination by upholding a law that allows hotels, ER doctors, business owners, and even pediatricians to legally deny services to hardworking LGBTQ families in Mississippi,” Sarah Kate Ellis, president and CEO of GLAAD, said in a statement.

“While freedom of religion is a fundamental right, it should never give people the right to impose their belief on others and openly discriminate against others in the name of religious exemptions.”

Jennifer Riley Collins, the executive director of the ACLU of Mississippi, said her organization expects that a narrower challenge to the law will move forward in the courts. That lawsuit, filed on behalf of a same-sex couple planning to marry in Mississippi, argues that the couple, Nykolas Alford and Stephen Thomas, will be subject to a different set of rules than heterosexuals seeking to marry, as the law will now allow government employees to claim religious exemptions from issuing them a marriage license.

The ACLU of Mississippi argues that the exemption runs counter to the rationale behind the Obergefell v. Hodges Supreme Court case that legalize marriage equality, which held that states could not deny same-sex couples marriage licenses.

“We are deeply disappointed in the Supreme Court’s refusal to hear challenges to HB 1523, the anti-LGBT law that allows religion to be used as a way to discriminate based on specific beliefs about gay marriage, transgender individuals, and sex before marriage,” Riley Collins said in a statement. “This law very simply is a license to discriminate. While the right to one’s religious belief is fundamental, a license to discriminate is not. Same-sex couples deserve to be treated with the same dignity and respect as anyone else.”

She also urged people who have experienced other forms of discrimination under HB 1523’s provisions to contact the ACLU, which is open to filing other lawsuits aimed at overturning the law.

“House Bill 1523 cannot trump the Constitution or other federal anti-discrimination statutes,” Riley Collins said. “We stand ready to ensure that those rights are enforced and that all Mississippians are protected from discrimination.”

John Riley is the local news reporter for Metro Weekly. He can be reached at jriley@metroweekly.com
← Previous Story Founder of Miss Trans America pageant murdered in her home
Next Story → At least 44 LGBTQ Texans are running for office in 2018