Activists launch “No Gay? No Way!” campaign to influence location of Amazon HQ2.0

By John Riley on February 1, 2018 @JohnAndresRiley

On Thursday, LGBTQ advocates launched a campaign designed to pressure global Internet retailer Amazon to set up its new Amazon HQ2.0 headquarters in a state that has robust protections for LGBTQ people from discrimination.

Four months ago, Amazon, which is based in Seattle, announced plans to build a secondary headquarters that is expected to employ an additional 50,000 people, and encouraged cities around the country to apply. In total, 238 cities or counties applied, which Amazon narrowed down to 20 finalists last week.

But LGBTQ advocates say that 11 of the locations on the finalists’ list — Atlanta, Austin, Columbus, Dallas, Indianapolis, Miami, Nashville, Philadelphia, Pittsburgh, Raleigh, and “Northern Virginia” (possibly Arlington or Fairfax) — should be non-starters for a company that has historically prided itself on its commitment to LGBTQ inclusion in the workplace. The reason? They are located in nine states that lack comprehensive, LGBTQ-inclusive nondiscrimination laws.

Advocates note that Amazon CEO Jeff Bezos has previously advocated on behalf of marriage equality and LGBTQ rights, donating to Washington State’s marriage equality referendum in 2012 and joining a coalition of corporations urging Congress to pass the Equality Act, which would amend the nation’s civil rights laws to include protections for sexual orientation and gender identity.

Amazon also co-authored a letter with 14 other corporations demanding that the Texas Legislature reject any bill that attempts to discriminate against transgender people. Bezos was even honored at last year’s Human Rights Campaign National Dinner with the HRC Equality Award for promoting an atmosphere of inclusion for the company’s LGBTQ employees.

“It is stunning that Amazon would consider locating HQ2 and tens of thousands of employees in a state that doesn’t protect LGBT employees or customers,” Conor Gaughan, a spokesman for the “No Gay? No Way!” campaign. “In one breath Amazon CEO Jeff Bezos is celebrating Amazon’s dedication to diversity and equality at gala dinners, and in the next he considering a major investment in a city or state where an LGBT employee can be fired or denied housing just for being who they are.”

To place pressure on the company, the “No Gay? No Way!” campaign will hold events in Seattle and launch a targeted digital advertising campaign, as well as take future online actions, to call attention to the lack of LGBTQ-friendly laws in those states. On Thursday, the campaign had a plane fly over the city of Seattle with a banner reading “No Gay? No Way!” and launched a mobile billboard that circulated throughout Amazon’s campus to spread the activists’ message.

“Amazon cannot turn its back on the LGBT community. The company has a fundamental responsibility to build its new headquarters in a compatible cultural and community environment,” Gaughan added. “Employees should never have to ask Alexa, ‘Will I be fired from my new job for simply being myself?’ The answer should always be ‘no.'”

In order to lure Amazon to set up its secondary headquarters, some states may attempt to pass limited or full nondiscrimination protections for LGBTQ people into law. When the Virginia Senate overwhelmingly passed bills to ban anti-LGBTQ discrimination in housing and public employment last week, some skeptics suggested that lawmakers were doing so in order to promote and LGBTQ-friendly image and encourage Amazon and other companies to set up shop in the state.

As such, it will be interesting to see whether Kirk Cox, the Speaker of the House of Delegates, allows an up-or-down vote on the nondiscrimination bills, or places pressure on his committee chairs to bottle them up in committee — and whether the outcome of that political fight influences Amazon’s final decision. 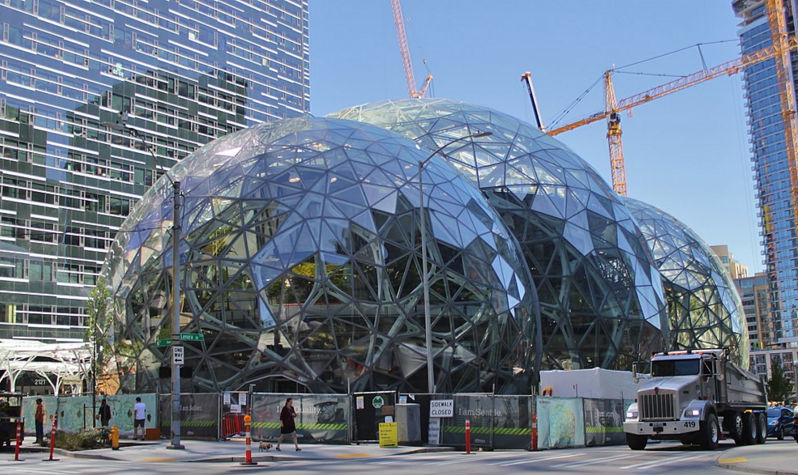