Black Panther is a giant leap forward for anyone craving authenticity in their superhero fantasies. 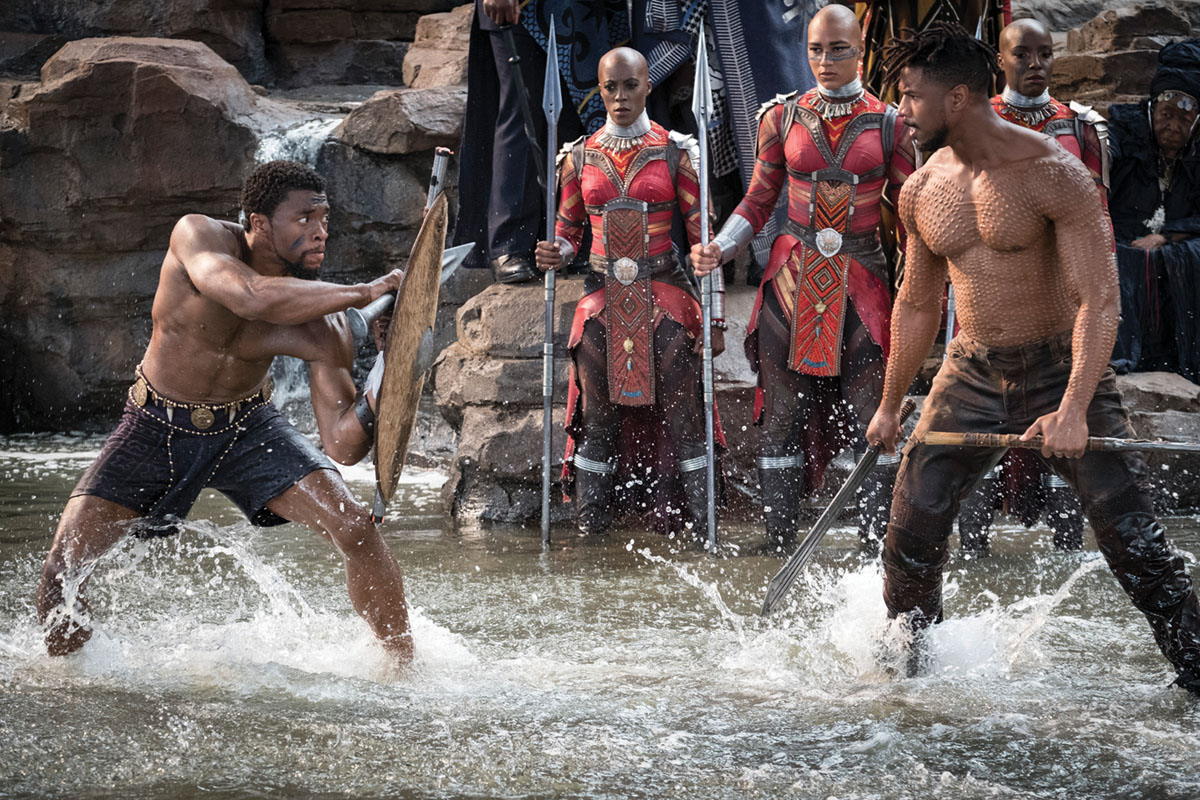 Black Panther is, without a doubt, the coolest superhero movie to come prowling out of Marvel Studios. It seemingly scored that goal just with casting, let alone an insistent hype campaign, including the release of a Kendrick Lamar-curated soundtrack, that drove ticket presales through the roof.

Writer-director Ryan Coogler (Creed) and the studio hivemind have produced the party that everyone’s clambering to get into, and it’s just as cool inside(although perhaps not quite as fun as was anticipated — Thor: Ragnarok still holds that prize).

Depending on where a viewer sits in their superhero cinema journey — sick to death of cinematic universes, or just sick of certain superhero franchises — it might be time for the Black Panther (

) banquet Coogler is serving, a glossy comic book fantasy with a healthy side of truth. This comic book hero fights in the real world.

After Christopher Reeve’s Superman tossed Zod, Ursa, and Non all over Metropolis, nobody from city hall or FEMA came calling at the Fortress of Solitude for help fixing the collateral damage. That was then. These days, superhero movies, especially those from Marvel, tend to admit and attack head-on the real-world implications of alien invasions and green, hulking hotheads able to destroy a city street with a single footstep.

In this universe, which introduced Black Panther in the 2016 hit Captain America: Civil War, those real-world implications resulted in a treaty called the Sokovia Accords, an attempt by the United Nations to gain some oversight of the activities of superpowered beings.

For Black Panther’s solo debut, Coogler and co-writer Joe Robert Cole step beyond mere implications to craft a story that pivots expressly around real-world questions. If this comic book fantasy of Wakanda — a tiny, isolated African nation rich in an alien mineral resource — came true, wouldn’t its ruler and people have a duty to share the country’s amazing scientific and technological advances, not to mention their wealth, with their underdeveloped neighbors on the continent? Isn’t generosity a necessary attribute of true leadership? 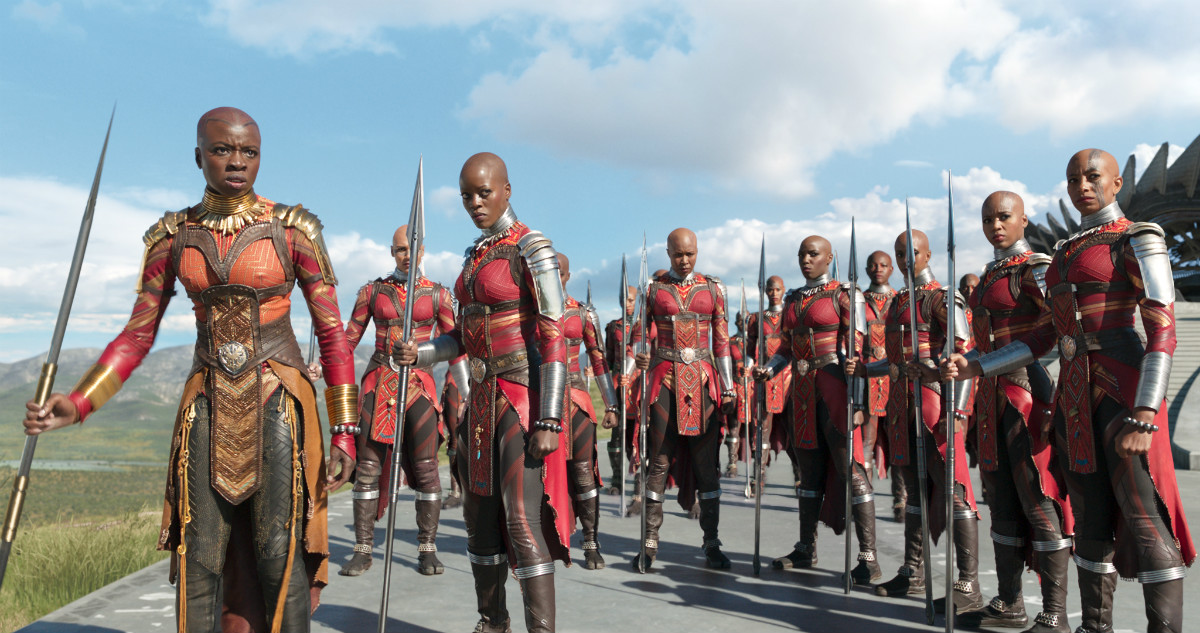 How could Wakanda’s King T’Challa (Chadwick Boseman), imbued with superhuman abilities as the Black Panther, stand idly by while vicious groups like Boko Haram kidnap women, while poachers, thieves, and arms dealers murder and pillage all over Africa? He sits privileged on the throne of a kingdom whose splendor matches that of Asgard, or Gondor, or any imaginary realm, yet surrounded by actual nations where the poor and hungry suffer.

Wary of invaders and colonizers, T’Challa and the Wakandans have good reason to remain hidden, but still they could do something to ease the suffering of their fellow human beings. So why don’t they? The story’s main villain, Erik Killmonger (Michael B. Jordan) believes T’Challa has turned a blind eye to the cause of black people struggling all over the planet, and the guy might have a valid point.

Of course, as villains do, Killmonger concocts a megalomaniacal fix for the problem that involves usurping the throne of Wakanda, then easing the world’s suffering by ruling it with an iron fist and Wakanda’s advanced weaponry.

That’s where the real world meets Marvel, and Coogler keeps the marriage exciting, aided by a sumptuous visual palette, the pulsating soundtrack, and an extremely capable cast of Oscar winners and nominees, led by Thurgood Marshall star Boseman. The qualities of acting regal and seeming regal are alike but not the same, and Boseman’s T’Challa projects the regal bearing of a man who was born to be king. Jordan’s Killmonger, a military-trained assassin marked with a scar for each one of the dozens of deaths he’s caused, matches him in intensity. The two are a striking pair of opposites. 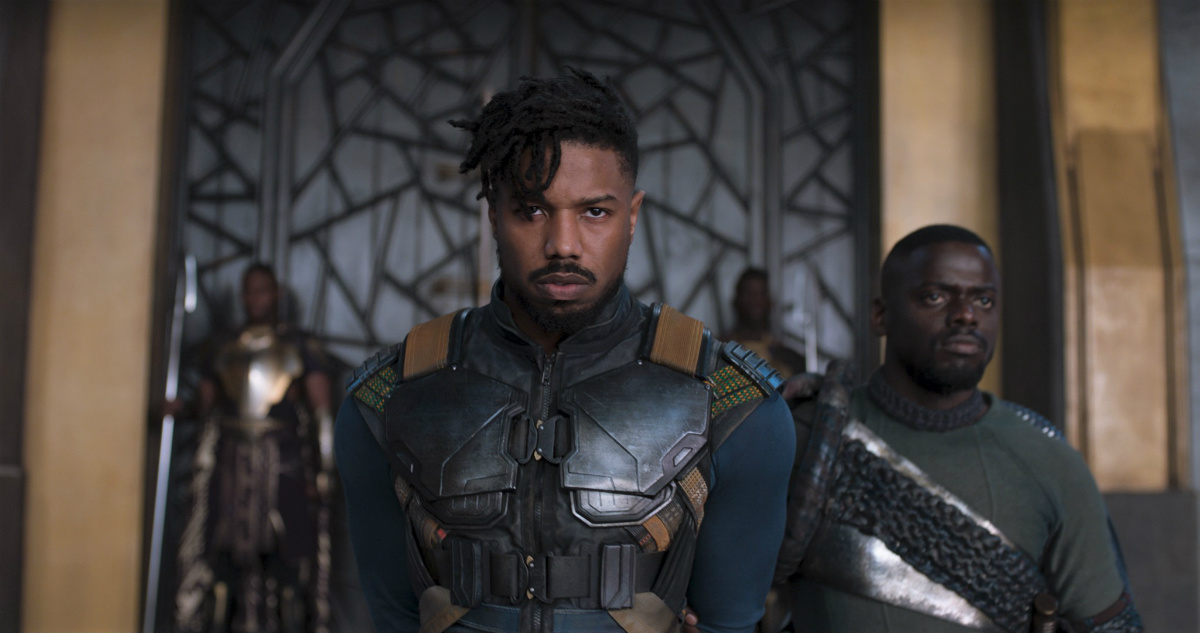 Among other triumphs, Black Panther draws persuasive conclusions about what should be the desired character of a good leader. It does seem better to follow a cool-headed, empathetic king who might sometimes get things wrong, than to be ruled by a raging despot who occasionally points himself in the right direction.

Such real-world comparisons add to the film’s sundry thrills, which include a fantastic fight sequence inside a Busan casino, and an army riding rhinos over the Wakandan plain. And there’s The Walking Dead’s Danai Gurira and the just-plain-awesome Lupita Nyong’o dazzling in their martial arts action scenes as kickass Wakandans Okoye and Nakia.

They’re here for the royal court drama, too, abetted by the always-regal Angela Bassett as queen mother Ramonda, and Forest Whitaker, a bit iffy with his Wakandan accent, but still compelling in the pivotal role of royal right-hand Zuri. 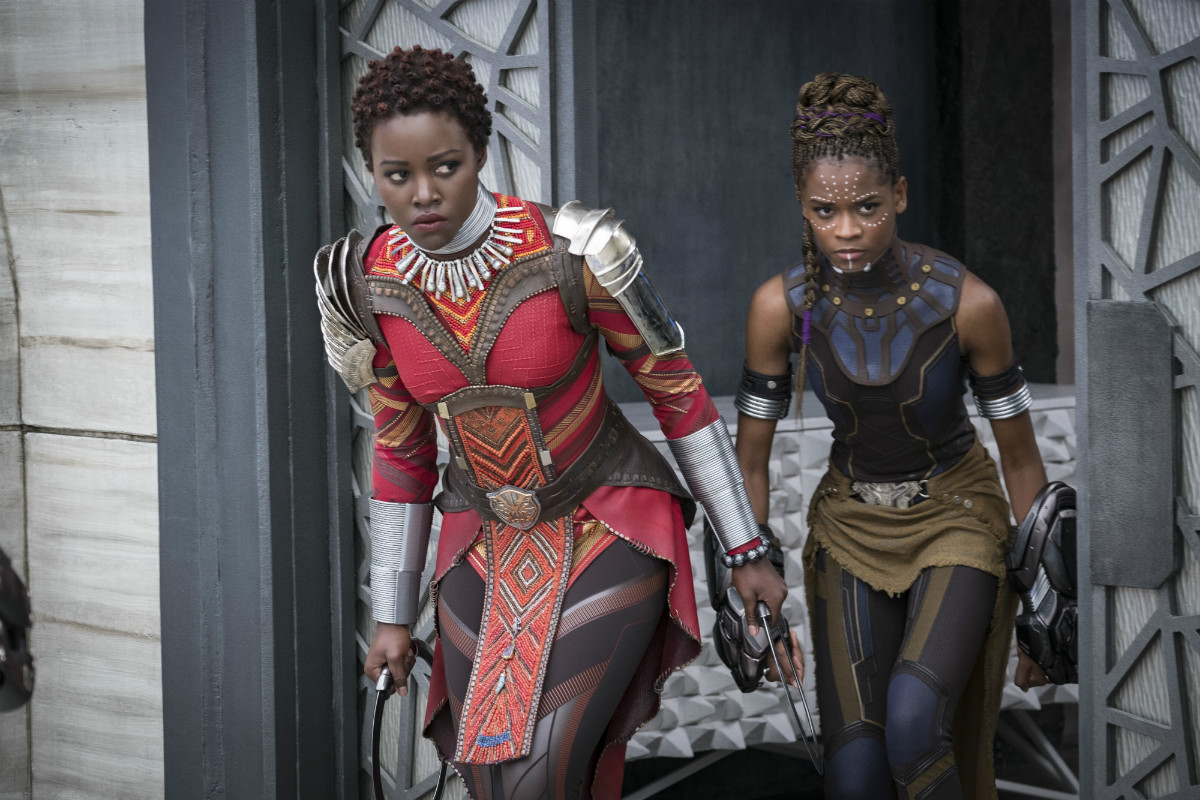 Most of the trademark Marvel comedic esprit is supplied by Martin Freeman, the snarky white guy out in this predominantly black cast, as CIA special agent Everett Ross, and by newcomer Letitia Wright, utterly delightful as T’Challa’s young tech wiz sister, Shuri.

More than any other character, Shuri represents the film’s underlying mission to depict complex images of past and contemporary African society, culture, and innovation. That she often saves the day in this multi-million dollar superhero movie is a giant leap forward for little sisters like her.