to its telling of the nation’s founding, and the format keeps the story feeling fresh even when the beats are thoroughly old-fashioned.

Notably, Wertenbaker’s self-described “historical fiction” debuted onstage in February 2015, the same month that similarly themed Hamilton opened Off-Broadway. Jefferson’s Garden (★★★½) might not spark its own pop cultural revolution, but it arrives in a new production at Ford’s Theatre with timely messages about liberty, equality, and national identity.

It’s all the better that the play delivers its lofty morals often with tongue in cheek, essayed by an excellent cast that’s also equally capable conveying the story’s darker passages. Those moments grapple with the ravages of war, the costs of privilege, and, of course, the injustice that some colonial thinkers referred to as “the slave problem.”

A world of urgent 18th-century concerns are addressed and distilled through the war-torn romance between Virginia slave, Susannah (Felicia Curry), and a Maryland Quaker, Christian (Christopher Dinolfo).

Born of a German immigrant father, and English immigrant mother, Christian, inspired by the socio-political writings of Rousseau, Paine, and, above all others, Thomas Jefferson, leaves his family farm to join Jefferson’s revolutionary militia. He’s disowned by his pacifist family, despite a promise to his sister Imogen (Maggie Wilder) not to raise arms in the fight, but to support the cause peacefully.

He finds and befriends Jefferson (Michael Halling) in Williamsburg, Virginia, where he meets Susannah. She contemplates taking up arms with the British, who’ve offered freedom to any slaves who’ll fight for the king, as Christian marches with the militia, only to see his vow to remain pacifist sorely tested.

The lovers’ paths intersect meaningfully not just with Jefferson’s, but also with that of his slave and illicit lover, Sally Hemings (Kathryn Tkel), as well as her brother, James (Kevin Michael Darnall). An educated, sophisticated thinker, James, like his sister, is in some ways treated like a member of the Jefferson family, but as the drama makes clear, his master’s supposed beneficence is inherently compromised by the fact that James is owned like a piece of property. The privileges Jefferson enjoys, and to a degree, confers to James and Sally, come at a deathly high cost for slaves like Susannah.

Christian tries to reconcile his passionate belief in liberty and equality for all with his admiration for Jefferson, who becomes a father figure to him. But through Christian’s eyes, the hypocrisy of the Founding Fathers fighting for freedom, while withholding that very right from their fellow man, blurs their noble vision of a fair democracy. As the play asks, both of this nation and of Christian’s family, How do you repair what’s broken?

Offering few completely satisfying answers, Jefferson’s Garden instead poses important questions about the differences of points of view. The most righteous patriot is easily labeled an insurgent or terrorist by his opposing rulers. For that matter, the colonists’ rebellion might be considered treasonous, or it might just be bold resistance to tyranny.

Wertenbaker tackles the subject matter with a philosophical and literary rigor that the great writer Jefferson might have appreciated. And director Nataki Garrett masterfully streamlines the expansive plot — which follows Jefferson, James, and Sally from Monticello to Paris, and back — into robust entertainment.

Although the storytelling does unnecessarily underline a few key lessons, the players keep the story flowing and on track throughout. Led by Curry’s and Dinolfo’s solid, layered performances, the entire cast tears into the play’s fast-paced action, snarky comedy, and meta asides with assured collective energy. Kimberly Gilbert delivers a standout comic turn as the supercilious mother of James Madison, portrayed by Thomas Keegan, who shines in multiple roles.

Dinolfo is outstanding in his own right communicating Christian’s crisis of conscience, the idealistic Quaker’s story emerging as an alarming cautionary tale of how a man might be gradually stripped of his principles. Freedom and liberty often aren’t granted without a fight, and this fight didn’t end with the Revolutionary War. It continues on many fronts. 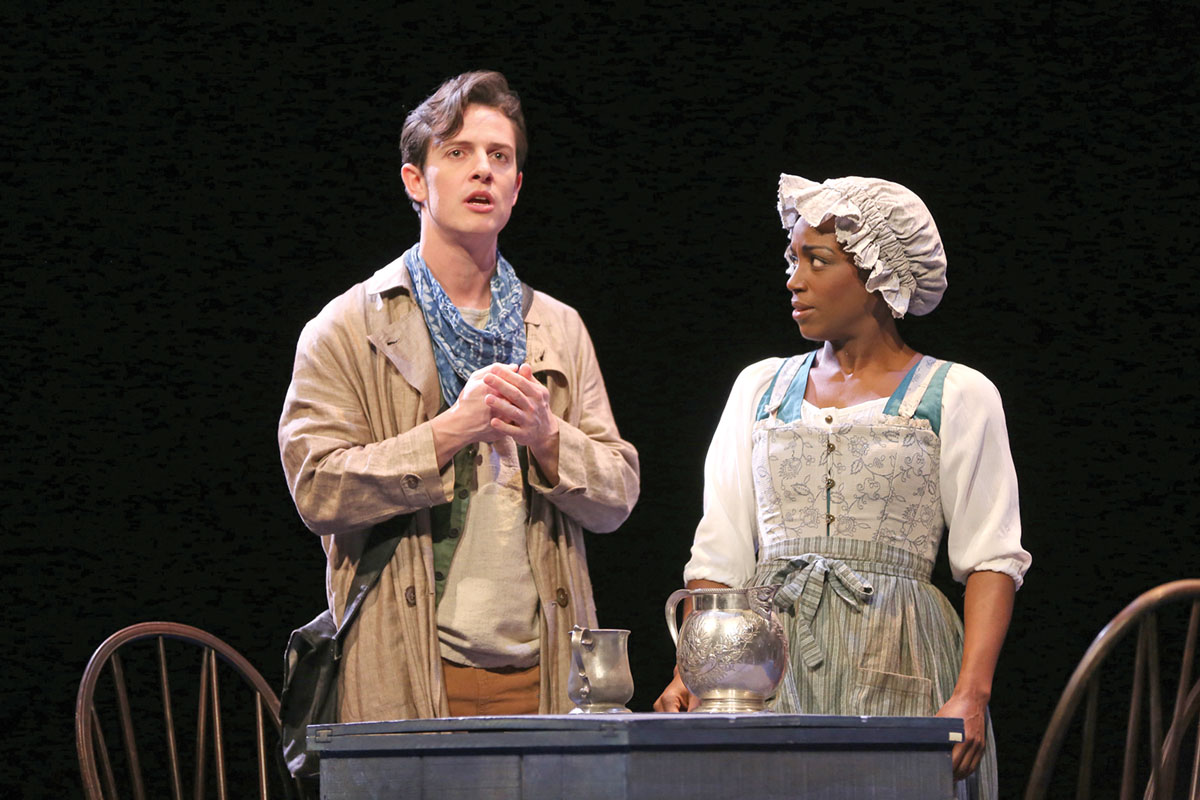