Something Rotten! is wicked good at lampooning both musicals and Shakespeare with love

A show for lovers and haters of musicals, and a sardonic swipe at Shakespeare to please both acolytes and detractors of the Bard, Something Rotten! (★★★★) is a theatrical delight. The entendre-laden book clips along swiftly, and the songs, dosed with arch references to countless other famous musicals, keep an alert audience on its toes to catch quick takes on everything from Sweet Charity to The Sound of Music.

Conceived by playwright brothers Wayne and Karey Kirkpatrick, Something Rotten! marries its disparate elements well, telling the tale of playwright brothers Nick and Nigel Bottom, contemporaries of Shakespeare who are desperate for a hit to rival their rival’s. They visit a soothsayer, who points them in the direction of theater’s next big thing: the musical. Naturally, the attempt to one-up Shakespeare with a Shakespearean musical will not be all it’s cracked up to be.

The touring production of the Broadway hit, directed and choreographed by Tony-winner Casey Nicholaw (The Book of Mormon), gets the musical just right. Led by Rob McClure and Josh Grisetti as Nick and Nigel, and Rent star Adam Pascal as Will Shakespeare, the celebrity toast of Elizabethan London, the sensational cast has every wrist flick and raised eyebrow of comic characterization nailed down — and for good reason. Counting this national tour and the original Broadway run, McClure, Grisetti, and Pascal have been baring their Bottoms and Shakespeare together for well over a year.

That experience especially pays dividends in the fine-tuned rapport of the Bottom brothers, and it shows in the vivid physicali

ty McClure brings to his portrayal of Nick, seething with jealousy over Shakespeare’s success.

The show soars into a stratosphere of musical-lover nirvana on a few occasions, but most ecstatically during the first act number “A Musical.” Soothsayer Nostradamus (Blake Hammond, simply marvelous), instructs Nick on what exactly a musical is, with the assistance of a gorgeous, high-kicking co-ed chorus line and a show-stopping song and dance that literally brings the production to a halt.

“A Musical” is damn hard to top. In fact, the second-act dip feels somewhat steep, but the company’s energy and the nicely fluid staging keep the party aloft, while Nicholaw’s zippy choreography registers as a natural extension of the kinetic performances from the entire ensemble.

Maggie Lakis spins gold playing the cross-dressing shenanigans of Nick’s uber-supportive wife, Bea, and Autumn Hurlbert, as Nigel’s Puritan love interest Portia, unfurls a cherubic Chenoweth-esque quality that serves her and the character well. As Portia’s prudish father, Brother Jeremiah, Scott Cote grabs laughs from every corner of the stage, while contributing to the story’s sly comment on art versus religious censorship.

Brother Jeremiah and his Puritan brethren receive a lovely assist from Gregg Barnes’ tongue-in-cheek, but still quite sumptuous, costume design. The sets and stage design function to spur the illusion of players putting on a show, but work mainly as background relief that makes those costumes really pop.

The whole show pops, and even if none of the playwright brothers involved invented or reinvented the musical, Something Rotten! generates such a good time, it begs saying: Get thee to catch it, before it flies. 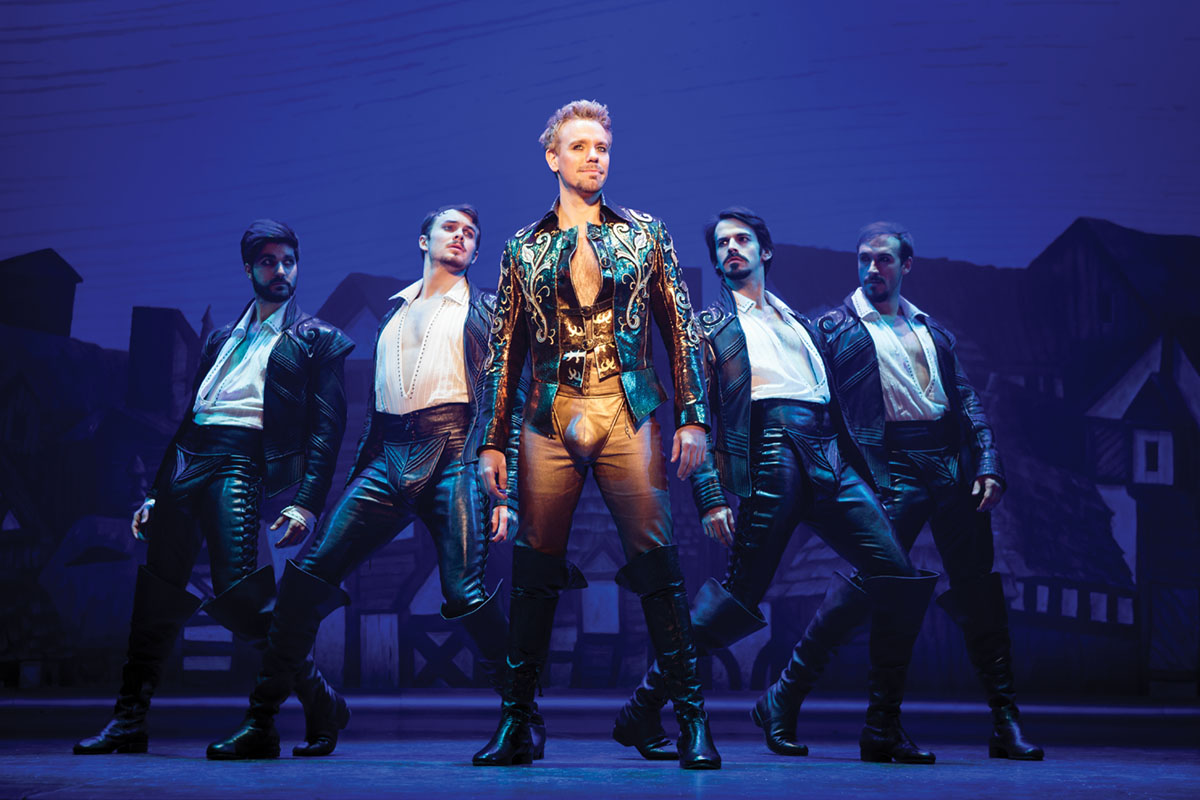