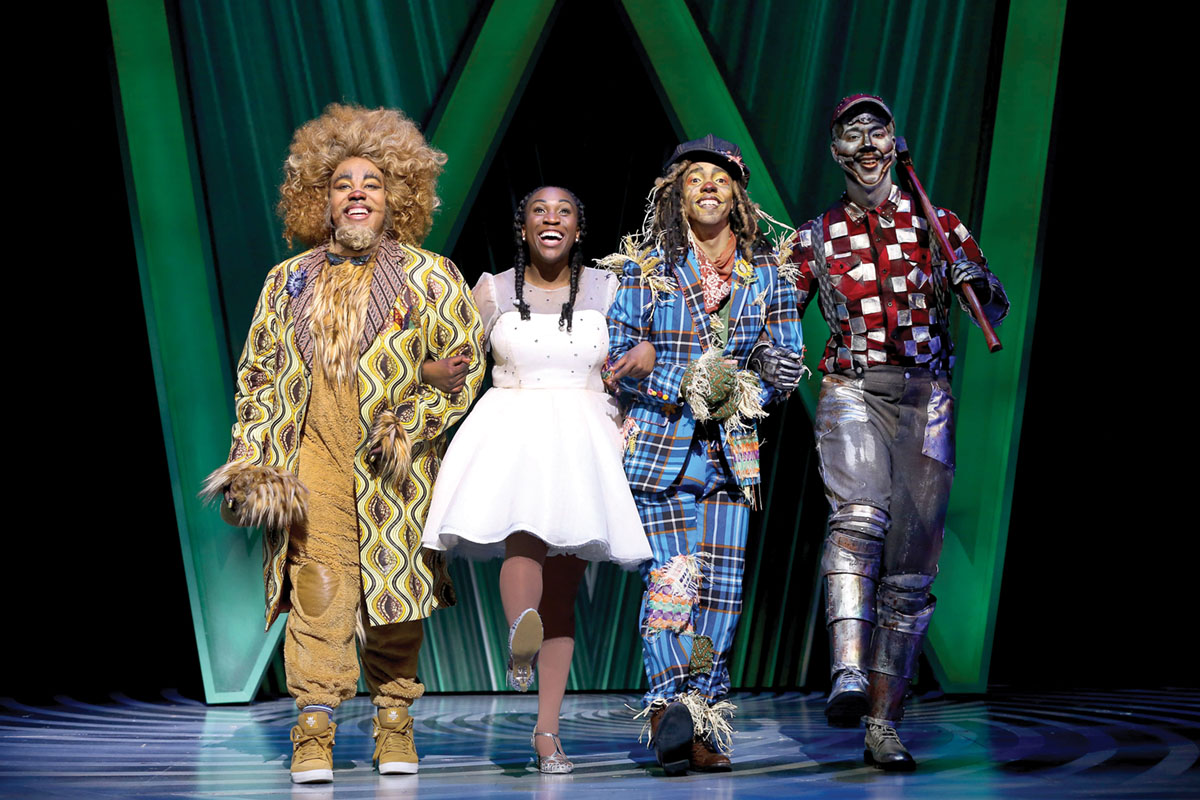 Friends of Dorothy, both young and young at heart, should find plenty to love in the Ford’s Theatre’s The Wiz (★★★½). And “plenty” is the operative word for director Kent Gash’s smile-inducing production, which amps up the camp fabulousness of the classic ’70s “super soul musical” journey to L. Frank Baum’s wonderful world of Oz.

Featuring beloved music and lyrics by Charles Small, a book by William F. Brown, and one glorious number composed by then-rising talent Luther Vandross, this African-American spin on Dorothy’s adventures in Oz was plentiful long before Gash’s twister blew through Ford’s. Yet, his staging expands the show’s varied palette of gospel, jazz, funk, and soul-infused Americana by adding a glossy layer of queer-friendly attitude.

Oz seems so full of fun, fantasy, and friendship, it’s a wonder Dorothy, well-played here by Ines Nassara, would ever want to leave. Once the innocent farmgirl from Kansas has vanquished her foes and learned to stay away from the poppies, what’s to keep her from just dropping the folks back home a line, and telling them to come visit for Christmas or Mother’s Day sometime. Isn’t that what a lot of Dorothy’s friends do after they’ve discovered life in their own version of Oz?

A gay cornucopia of music and fashion, this Wiz might allow Baum’s original story and themes to slip somewhat through the cracks of the dancefloor. The tale’s rougher edges of abandonment and anxiety have been smoothed over by a pithy comic sensibility ready to drop hip references to Siri and Wakanda. But what this rendering loses of the standard “no place like home” moral is compensated for by an affecting sincerity in the heroes’ pursuits of brains, heart, courage, and family.

That genuine warmth is matched by a lustrous showmanship that keeps the comedy buoyant and the songs humming. The spectacle takes off with the story’s famous twister, depicted as the whirling Tornado (DeMoya Watson Brown) leading an onslaught of dancers across the homestead of Dorothy’s Uncle Henry (Jaysen Wright) and Aunt Em (Monique Midgett). 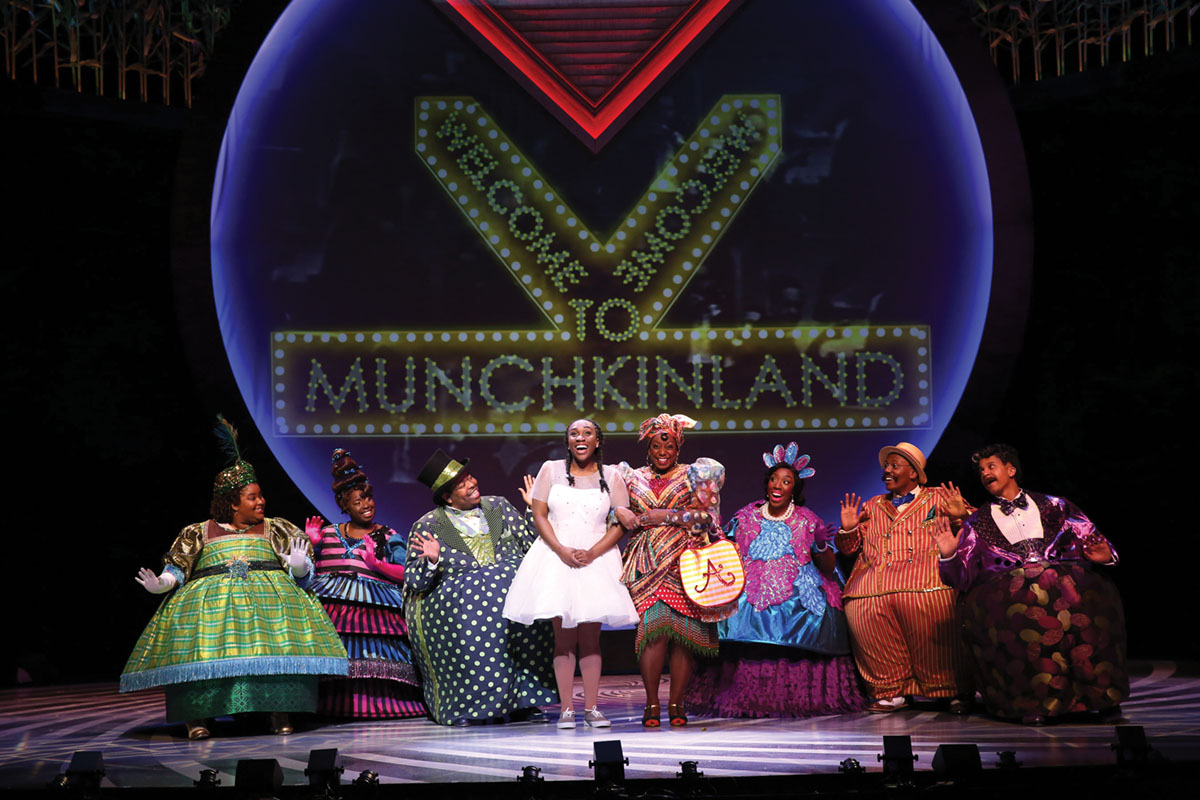 Steadily unfurling unruly reams of black cloth around the ascending, teetering façade of the Kansas farmhouse, Tornado and her windy minions blow Dorothy, sans Toto in this iteration, all the way to Oz. There, she encounters tap-dancing munchkins, good and wicked witches, flying monkeys, and she comes by the friendly companionship of Scarecrow (Hasani Allen), the Tinman (Kevin McAllister), and the Cowardly Lion (Christopher Michael Richardson).

Following the advice of Addaperle, Good Witch of the North (Midgett, again), Dorothy and friends shuffle along the Yellow Brick Road to the Emerald City to seek help and guidance from the great and powerful Wiz (Jobari Parker-Namdar).

Gathered along the velvet rope outside the Wiz’s chambers, the crowd looks dressed for a night out at Studio 54, appropriate for a show that feels like a party from beginning to end. The host doing the most, the almighty Wiz appears as a purple trench coat-wearing, self-hyping amalgam of Prince, Rick James, and MJ that’ll fly, literally, over some kids’ heads, but is sure to coax chuckles from their parents.

Less inclined to coaxing, Christopher Michael Richardson outright snatches laughs and tears with his full-bodied portrayal of the wannabe-mean ol’ Lion, while Hasani Allen puts his own silver-tongued stamp on the Scarecrow. As the romantic — and a bit randy — Tinman, velvet-voiced Kevin McAllister makes aching for a heart feel mighty real.

Each of Dorothy’s companions gets a great assist from costume designer Kara Harmon’s brilliantly colored wardrobe. The costumes are well-complemented by clever character design, hair and makeup, just as Dell Howlett’s choreography is beautifully relayed by the talented ensemble.

The production’s conception of the Wicked Witch of the West (Midgett) lacks something of the bone-chilling bearing one craves in a bellowing ballbreaker named Evillene. Generations can attest to just how frightening Margaret Hamilton was on film in The Wizard of Oz, and Mabel King was a whole other kind of scary as Evillene in The Wiz‘s original Broadway run, and reprising her role in the 1978 movie. Midgett’s Evillene is a hoot, but she doesn’t register as the hag who has all Oz quaking in their rollerskates.

Gash deploys a limber chorus boy on roller skates, and crossdressing poppy flowers, and a thrilling Afro-Caribbean “Everybody Rejoice/Brand New Day,” all of which generally sell the appeal of a land of liberty where a girl gets to hang out with a talking, breakdancing, cartwheeling Scarecrow.

By the time the wonderful Awa Sal Secka saunters in to sing the house down as Glinda, the Good Witch of the South, quite a few friends of Dorothy will believe that sticking around Oz is a far better idea than heading back to Kansas.

The Wiz at Ford's Theatre