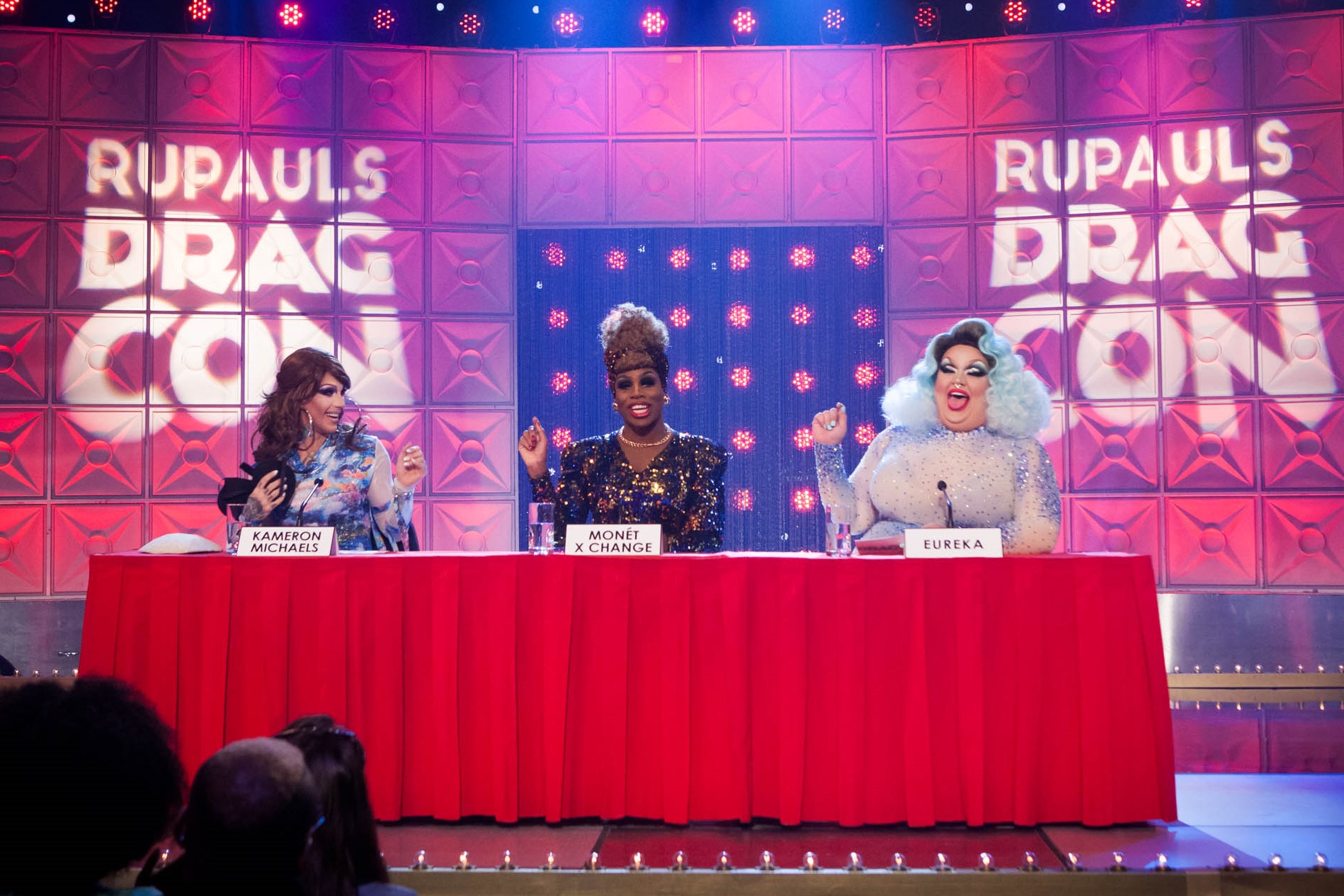 If ever there was an example of RuPaul’s Drag Race at its best — and its most shameless — Thursday’s episode was it. From roaring highs to crashing lows, it offered an emotional rollercoaster as well as plentiful laughs, workroom drama, main challenge excitement, and brutal awkwardness.

On the other hand, this entire episode was also one lengthy commercial for RuPaul’s Drag Con, taking Ru’s promotional winks to camera to their absolute extreme.

It all kicked off in familiar fashion, as Monét X Change recovered from sending Mayhem Miller home last week. After two weeks on the bottom, a queen touted by even her fellow competitors as one of the quickest and funniest in the business really needs to step up her game.

On the other side of the coin is Miz Cracker, who has consistently come within touching distance of winning but never quite managed to reach it. As Monét said, she’s “the Susan Lucci of season 10.” Unfortunately this was all classic editing foreshadowing — as Cracker spoke to camera, determined to reach the top, there were shades of countless queens before her who’ve asserted the same and then crashed hard. Blair St. Clair followed suit, also keen to finally win a challenge. She, too, fell prey to editing.

Before the  main event, we were treated to a fairly pointless but mildly amusing mini-challenge, as the queens were asked to sit on various objects and guess what they were using just their behinds. There was nothing of value to be won — Asia, who guessed the most objects correctly, earned nothing that would help her in the main event — so it all depends on whether you think watching Eureka burst a bag of chips after dropping onto them too quickly is funny. For the record: We do.

The maxi-challenge was fairly straightforward: The queens would form three teams and produce their own panels for a special runway edition of RuPaul’s Drag Con. Blair, The Vixen and Cracker formed Team Hair, Asia O’Hara, Aquaria and Monique Heart became Team Face, and Eureka, Kameron Michaels and Monét were Team Body.

Props to last week’s winner Eureka, who honed in on Kameron, who is relatively quiet, and Monét, who was in the bottom two last week. The other queens ignored them, but Eureka specifically opted to create a team with them. That’s classy. Also, it was a win for Kameron and Monét, as she’s participated in Drag Con panels before. Score one for experience.

Team Body immediately latched onto Eureka’s accidental portmanteau “Proportionizing” and used it as the base for their entire panel. And it worked to splendid effect. Kameron was factual, if a little bland, explaining how she forms a womanly shape from her muscular body. And in an emotional workroom moment, revealed that she gave up drag and bulked up her body for a boyfriend. Once the relationship was over, she went back to drag and found herself somewhat ostracized for looking so “manly,” leading to a period where she forced herself to try and mask her body as much as possible.

Monét offered sass galore as she explained her approach to padding — something RuPaul read her for in the workroom, given she failed to actually wear pads last week in a challenge that saw her addicted to eating them. (Read the full recap here if that doesn’t make any sense.) She also had a workroom moment when she revealed that her parents in St. Lucia didn’t know she was a drag queen, and she feared their response to the truth.

Meanwhile, Eureka once again stole the show at every available opportunity with one-liners, charisma, and a strong command as the panel moderator. Plus, her overt sexualizing of Pit Crew member Bryce drew big laughs from the audience, and her answer to drag in the current political climate perfectly encapsulated the moment.

Team Face was centered on the ever-magnetic Monique Heart, who continues to be this season’s most charismatic and gloriously over-the-top contestant. She also revealed that most of her looks are pulled together just moments before hitting the stage — unlike the other queens, she lacked the money to bring a suitcase filled with couture looks. Instead, Monique’s sickening runway outfits have been crafted by hand in the workroom. Or, as Monique put it: “I came to this competition with glitter and Jesus, and bitch I’m making it work.” Preach.

Team Face’s panel was amusing, if a little awkward. Monique served as she demonstrated how to apply highlighter and Aquaria and Asia offered some nice sentiments about the power of experimenting with make-up. Things fell apart a little during Asia and Aquaria’s synchronized eyelash and lip sparkle demos, but overall it worked — and largely that was due to Monique’s strong moderation and engaging personality.

But boy, did Team Hair fall hard. True to form, the editing screwed over Cracker and Blair. After telling Ru in the workroom that they intended to have a fun, loose panel — and being politely recommended to have a structure — things promptly fell apart in a mess of misplaced reads, talking over one another, and awkward silences.

Blair tried to keep things together as Cracker and Vixen threw reads around, but it was the total lack of genuinely useful information and a dreadful demo wig for Bryce that put the nails in this coffin. It wasn’t just Ru, Michelle, Ross and special guest judges Emily Gordon and Kumail Nanjiani who were wincing — we all were. It was embarrassing how long this segment felt, how awkwardly boring it was, and just how badly the queens missed the mark.

Once they’d cleared the stage, it was time for this week’s main runway look: Hats Incredible.

Ultimately, and unsurprisingly, it was Team Body who took the win this week — with Eureka named overall winner for the second week in a row. Equally not shocking was Team Hair being this week’s losers. Miz Cracker slipped through on the beauty of her runway look (and presumably the strength of her previous efforts), leaving Blair and Vixen to lipsync for their lives.

But before all of that, we had a heartstopping runway reveal — the sort that only comes out when a queen has been pushed to the edge — and this time it was Blair’s turn to break down. After Ross told her she was perhaps too cute for the competition, she revealed that her sweet persona is an attempt to mask the trauma of her first sexual experience, which involved being raped at a college party. “I urge to find daintiness,” she told the judges, “because I feel dirty at times.” It was a powerful, poignant moment, and a reminder of the facade that so many people — not just drag queens — put up to cope with traumatic and tragic events. It was also a reminder, yet again, that amidst the sequins and shade Drag Race continues to shine a light on important issues. 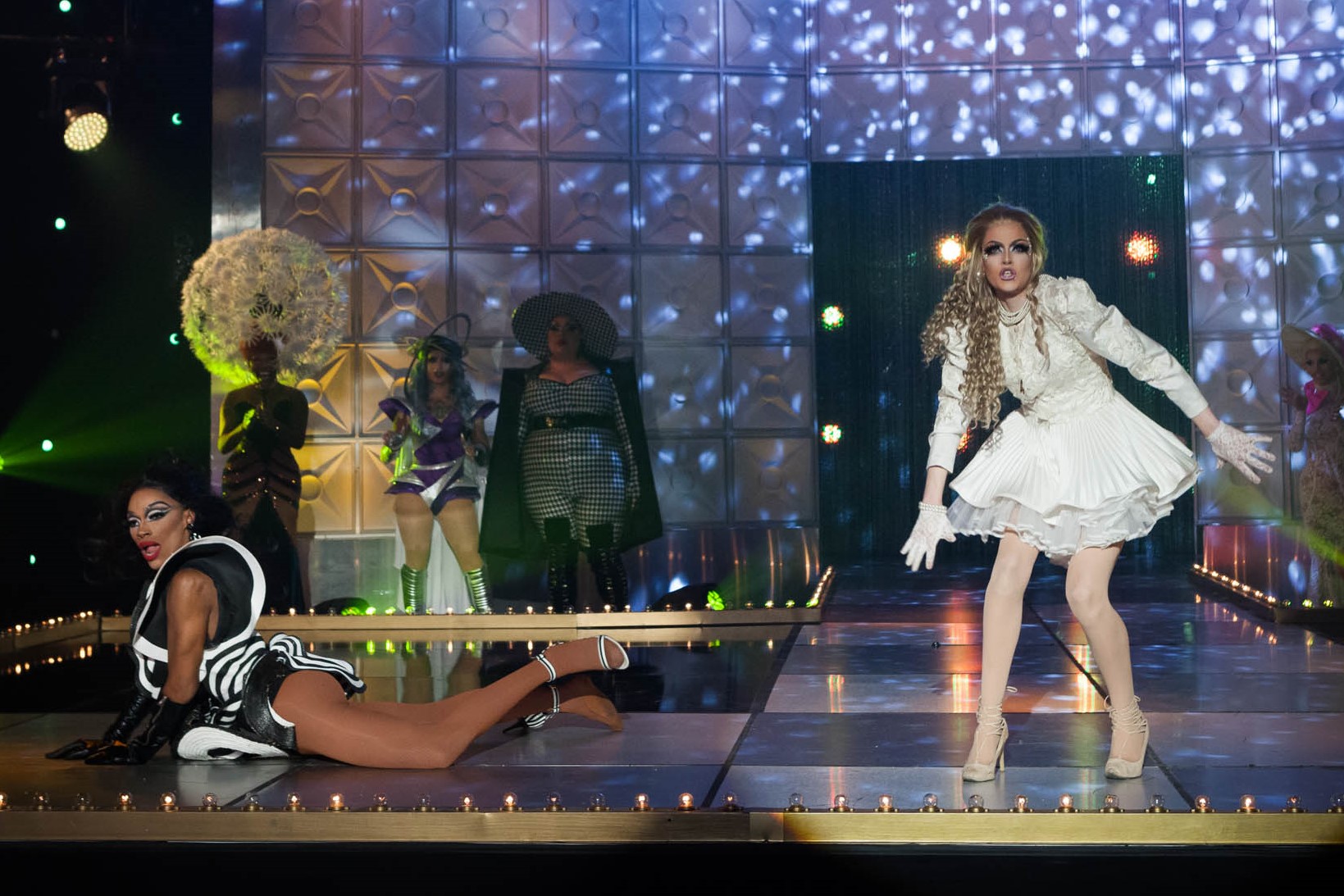 It was painful to subsequently watch Blair crash out in a lipsync to Diana Ross’ “I’m Coming Out.” Delivering a too-emotional, too-serious performance that contrasted poorly with Vixen’s fun, energetic attempt, it was Blair who was ultimately told to sashay away. But far from a just decision, this felt like harsh punishment for revealing such brutal truth only moments before. This was Drag Race at its best — and reality television at its most unfair.

And that was episode six. What did you think? Did you gag over any moments we missed? Did Blair deserve to go? Let us know in the comments!

Rhuaridh Marr is Metro Weekly's managing editor. He can be reached at rmarr@metroweekly.com.
← Previous Story RuPaul’s Mayhem Miller: “I have more to offer than ALL of them.”
Next Story → Blair St. Clair on “Now or Never,” Mike Pence, and Drag Race