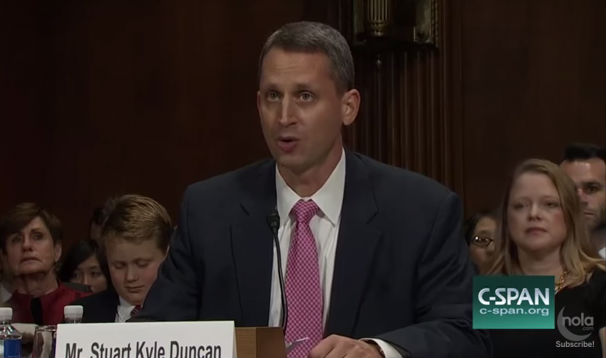 On Tuesday, the U.S. Senate voted 50-47 to confirm Kyle Duncan for a lifetime appointment to the 5th U.S. Circuit Court of Appeals despite objections to Duncan’s past advocacy on behalf of anti-LGBTQ causes.

All four lawmakers expressed alarm at Duncan’s past statements in support of, or work on behalf of, conservative causes, including fierce opposition to marriage equality and a decision to represent the Gloucester County School Board after it was sued by Gavin Grimm over its policy barring transgender students from using bathrooms that match their gender identity.

“We should not be giving a lifetime appointment to someone with such a long record of working on the wrong side of women’s rights, LGBTQ rights, or civil rights,” Murray said, referring to Duncan’s role as lead counsel in the Hobby Lobby case where the Supreme Court decided that an employer could refuse to provide insurance coverage for an employee’s medical treatments, ranging from birth control to potentially life-saving medications, if they felt the treatment was related to a part of the employee’s personal life to which the employer had strong moral or religious objections.

Murray also noted that Duncan filed a brief in the Whole Women’s Health case involving a Texas law restricting access to abortions, has argued in favor of allowing pharmacists to refuse to fill prescriptions based on their moral convictions, and has argued against allowing LGBTQ parents to be listed as the legal parent on their children’s birth certificates.

Duncan has been on the radar of many civil rights groups since March, when LGBTQ and civil rights advocates, as well as reproductive rights activists, held a rally to oppose his nomination on the steps of the Supreme Court. As his record has come to light, he has been criticized for a speech he gave in 2016 to the Heritage Foundation in which he reportedly complained about the Obama administration’s interpretation that civil rights laws like Title VII apply to instances where transgender people are discriminated against. He has insisted that transgender people suffer from mental health issues.

Duncan also represented the state of North Carolina when it was sued over the controversial HB 2 law placing restrictions on LGBTQ civil rights ordinances and transgender bathroom use, and represented a birth mother who wanted to bar her former same-sex spouse from having visitation rights to the children they raised together.

Coons said Duncan was the type of “nightmare candidate” that civil rights advocates have long feared would be confirmed to the federal bench, saying he did not believe Duncan would be able to be impartial when cases similar to those he had argued as a lawyer came before the 5th Circuit.

“Kyle Duncan is almost a Saturday Night Live caricature of the judicial nominees who have come from the Trump administration,” Blumenthal said on the conference call. “I’ve said that these judicial nominees are legal Neanderthals, and Kyle Duncan is straight out of the Stone Age. He’s not only out of the mainstream, he’s out of the stream completely. I have appeared before the Fifth Circuit and I have tremendous respect for its judges. He is unworthy to be on that court.”

Lambda Legal CEO Rachel B. Tiven denounced the Senate’s decision to confirm Duncan in a statement.

“Lambda Legal very quickly identified Kyle Duncan as one of President Trump’s worst nominees. His clear and abundant record opposing voting rights, women’s right to access contraception, and civil rights for the LGBT community singled him out in a very crowded field,” said Tiven. “The idea that Mr. Duncan will cast aside his bigoted beliefs overnight, and miraculously transform into an impartial judge, is ludicrous and reckless. His career has been one long grudge match against women and LGBT Americans — now the Trump-Pence Administration is making him a referee.

“No one with Kyle Duncan’s record of bias should ever serve as a judge,” added Tiven. “We will be watching Mr. Duncan’s decisions, and making sure all Americans know what their Senators voted for in confirming him. This vote will not be forgotten, nor will those who continue to help this administration rig our legal system. Lambda Legal will keep fighting for equality in court, because the law is on our side.”