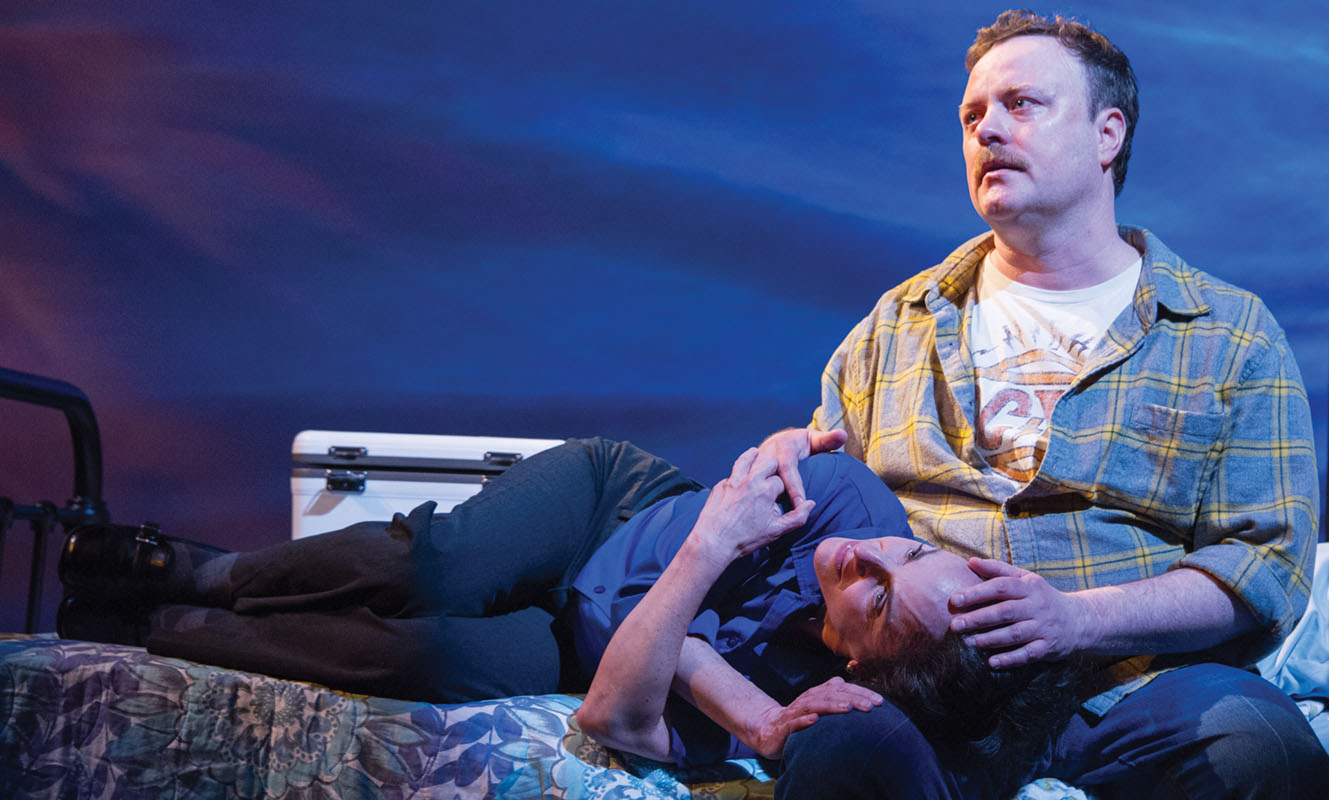 Over the course of a decade and a half, two allies become adversaries in the midst of an AIDS crisis that threatens to overtake both them and the rest of the world. Dr. Roz Kagan and Ray Leon meet in 1977, when the distraught single father of two brings his twin hemophiliac boys, Ray-Ray and Mikey, to Roz for care. Ray’s boys, like many hemophiliacs, have been dependent on painful, time-consuming infusions of a clotting agent known as cryoprecipitate to stall any bleeding.

But Dr. Kagan, an esteemed hematologist and oncologist at San Diego Children’s Hospital, is excited about the recent innovation of a more concentrated clotting agent, factor VIII. She introduces Ray and the boys (who never appear onstage) to this miraculous treatment, even pricking herself with a syringe to teach Ray-Ray and Mikey how to inject the factor VIII themselves.

Factor VIII augurs a new independence for Ray’s family, who will no longer need to rush to the hospital for a lengthy cryo infusion every time one of the boys skins his knee or cuts a finger. Yes, as the doctor explains, both cryo and factor VIII are derived from donated blood, but factor offers a more concentrated dose of the vital coagulant protein that can prevent Ray’s boys from bleeding to death. They need this.

Not until the early ’80s, reading about the terrifying new “gay bug,” does Dr. Roz or anyone else start to worry that the factor VIII supply might be tainted. Testing for this unfamiliar virus is still new and unreliable, so Dr. Roz counsels Ray to continue treating his sons with factor VIII, despite the enormous risks. It’s an ethical, clinical game of Russian roulette, with Ray-Ray’s and Mikey’s lives in the balance.

Karen Hartman’s penetrating, cathartic drama, Roz and Ray (★★★½) has a lot of work to do, constructing from the performances of just two actors — Tom Story and Susan Rome — a complex, time-shifting narrative steeped in history and further complicated by an abundance of medical jargon. Yet, in its East Coast premiere, directed by Adam Immerwahr, the drama flows smoothly. 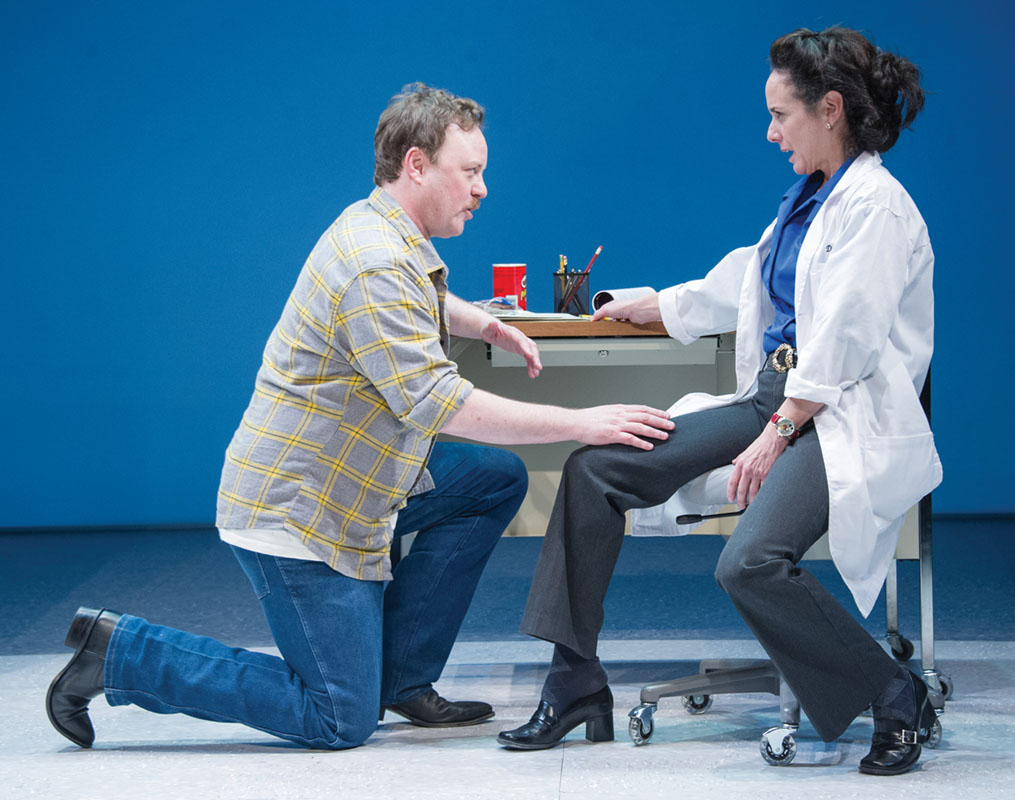 Led by gripping performances from Story and Rome, the production cogently organizes an expanding universe of personal, political, scientific, ethical, and romantic concerns into one gut-punch of a weighty narrative. Both performers carry that weight, playing out Roz and Ray’s years-long partnership in struggle as a double-edge sword that benefits as much as it corrupts the doctor-patient relationship.

Rome’s Roz is a dream physician: authoritative, knowledgeable, and caring. But when the doctor’s knowledge fails her, outpaced by a bug that launches an epidemic, Rome succinctly and convincingly essays the expert’s diminished confidence. It’s an admirably compact performance, effective especially in moments that expose the intensity of Dr. Roz’s fear and guilt, as evidence mounts that factor VIII might be more poison than remedy.

Rome is less effective in conveying the doctor’s halting attraction to loving lug of a dad, Ray. It’s certainly possible for a straight woman and a bisexual man, as Ray appears to be, to engage in lustful romance, but that additive element, meant to complicate doctor-patient ethics even further, doesn’t spark on either side of the equation. Even if the audience should guess right away that these two are merely passing ships, their clinches are more plot contrivance than dearly felt.

The put-on romance shouldn’t be necessary in an otherwise fiery journey through the certain hell of parenting two vulnerable, factor VIII-dependent children through the early days of the AIDS crisis. Story brings that journey powerfully full-circle, from the play’s introduction of Ray as a cheerful transplanted Texan, worried about his kids and wary of Dr. Roz, to the man who could love her for saving them, then hate her for possibly dooming them.

The performance unfolds in harmony with the play to reveal Ray as someone wounded by his often futile attempts to be the manly protector of his brood that his dad taught him to be. Despite the cowboy boots and forced bravado, he’s a man whose wife left him, who might be gay, and who finds himself in constant fear of losing one or both of his two fragile little boys. The righteous anger he bares in protest could singe the seats of the theater.

The story feels deeply personal. Maybe it should, as the playwright, inspired by the career of her hematologist/oncologist father, grapples with a subject of life-changing meaning to her own family. Wonderfully, the production transfuses a potent dose of that meaning to this tale of one woman, one man, and two boys that the audience will care for as much as if they were present in flesh and blood.

Roz and Ray at Theatre J 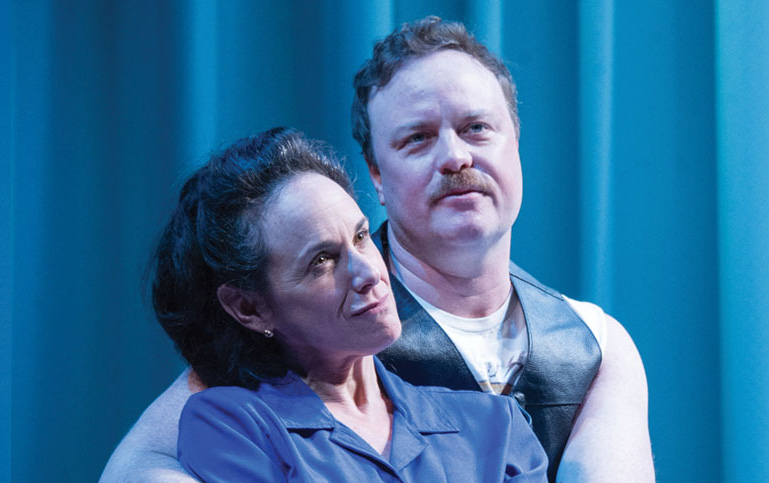