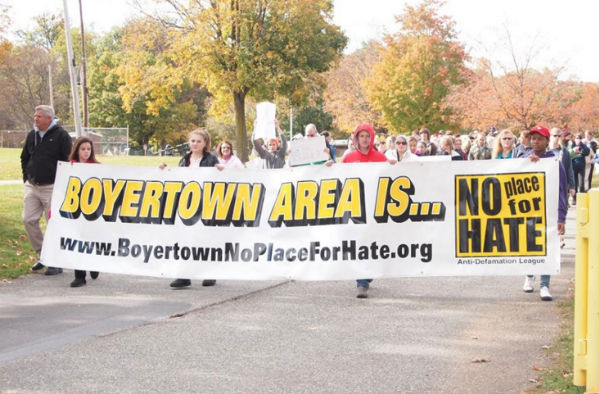 An anonymous cisgender student known as “Joel Doe,” and his parents, sued the school district after Joel Doe saw a transgender male in the locker room while changing for gym class. He and his parents complained to administrators, who told him he must either “tolerate” sharing facilities with transgender students or opt to use alternative facilities, such as a bathroom in the nurse’s office, to change.

Joel Doe claimed he experience “embarrassment and humiliation” from being the presence of a transgender student while changing, and refused to change for gym class due to his discomfort, which, in turn, affected his grade in the class.

His lawyers, from Alliance Defending Freedom, claimed that forcing him to share facilities with students who may be transgender constitutes “sexual harassment.” Three other students also joined the lawsuit.

A formal order from the 3rd Circuit is forthcoming.

“The court saw that treating transgender students equally does not harm any other students in the school,” Ria Tabacco Mar, a staff attorney with the ACLU’s LGBT & HIV Project, said in a statement. “All students should have the opportunity to fully participate in school. Boyertown’s practice makes that possible.”

Aidan DeStefano, a transgender man who graduated from Boyertown Area High School in 2017 and had asked to intervene as a defendant in the case, celebrated the court’s decision.

“Transgender students just want what everyone else wants, to be accepted for who we are,” DeStefano said. “Reversing the practices that have allowed me and other trans kids to thrive at school would have been devastating. I’m glad other transgender students will know the experience of being treated like any other student.”

The Pennsylvania Youth Congress, a coalition of LGBTQ youth groups, also intervened in the case.

“This case has always been about ensuring a fair and equal educational environment for transgender students,” Mary Catherine Roper, the deputy legal director of the ACLU of Pennsylvania, said in a statement. “We are grateful that the court understood that, and we are especially grateful to our clients who bravely stood up in defense of the school’s practice.”

The Human Rights Campaign also cheered the court’s decision, which dealt a blow to one of several Alliance Defending Freedom lawsuits that are challenging pro-transgender policies in schools across the nation.

“As the Trump-Pence Administration and anti-equality activists continue to attack our school children, federal courts nationwide are reaffirming the legal rights and dignity of transgender people,” Sarah Warbelow, HRC’s legal director, said in a statement. “School should be a safe space for all youth, and we commend the Boyertown Area School District for not only implementing an LGBTQ-inclusive policy, but for fighting to protect their most vulnerable and marginalized students.”