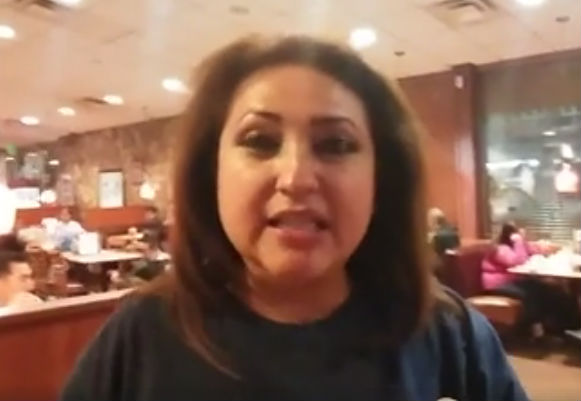 A California congressional candidate posted a Facebook live video of her harassing a transgender woman using the ladies’ room at a Denny’s restaurant in Los Angeles.

Jazmina Saavedra, a self-identified “businesswoman” who is one of two Republican candidates running in the 44th Congressional District, filmed herself confronting the woman and, with the help of a manager, escorting the woman out of the restaurant.

Saavedra told local ABC affiliate KABC that the incident started after a waitress told her there was a man who said he was a woman using the women’s restroom. So she decided to confront the individual, asking her, while she was inside the stall: “Why you use the ladies’ room?”

“No, you invading my privacy because I’m a woman and I deserve to use the ladies’ room,” counters Saavedra.

At one point in the video, Saavedra complains about California’s pro-LGBTQ laws, saying: “This is so stupid in California. This is what the sick politician are approve. They putting in danger a woman like me and some other customers who trying to use the ladies’ room with a man inside saying he is a lady.”

After the trans woman leaves, Saavedra brags to the camera that she had a stun gun and pepper spray ready during the confrontation, showing her weapons and saying that every woman should have them to protect themselves.

She later told KABC that her post is being misconstrued as anti-gay.

That said, she doesn’t regret any of her actions.

“This is so stupid…this is nothing to do about gay or nothing. This is about how myself and the other customers feel in danger by hearing a voice of a man inside.”

Under California’s primary rules, only the top two vote-getters will advance to the general election. But Saavedra, the least well-known of the four, may now be getting some publicity for her campaign. As of Friday afternoon, her video had gained more than 94,000 views and generated several comments from conservatives, from across the nation, expressing support for her actions.

Barragán issued her own statement responding to the video.

“I was appalled by the treatment that this woman received for simply trying to use the restroom,” the congresswoman said. “Everyone has the right to their own identity, and the right not to be discriminated against for who they are.”