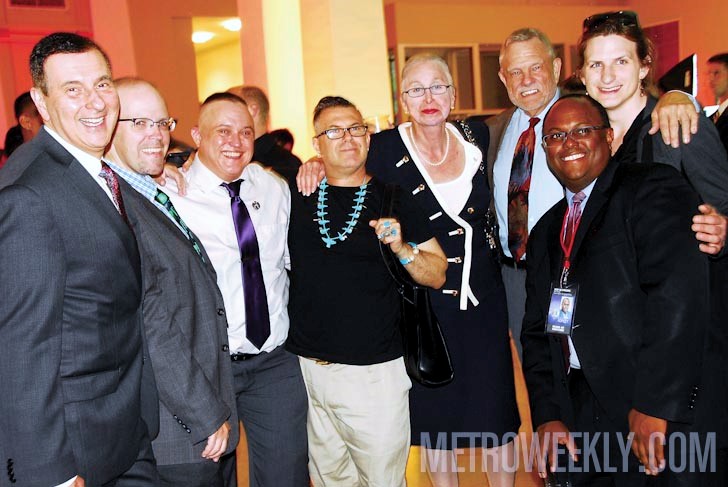 The Capital Pride Alliance has announced the recipients of several awards that will be given out at its annual Capital Pride Heroes Gala on Thursday, June 7.

Capital Pride Heroes are those individuals whose contributions have had a positive, significant, and long-lasting impact on D.C.’s LGBTQ community.

Heroes Gala awardees are nominated each year by members of the public and recommended by a special committee of Capital Pride’s Board of Directors, before their nominations are approved by the full board. The process is the same for Engendered Spirits, except they are recommended by the Trans Pride Committee.

This year’s Heroes honorees include Gregory Cendana, the president and co-founder of Can’t Stop! Won’t Stop!, a consulting firm of and for people of color that advocates on behalf LGBTQ rights; Jesse Garcia, an Obama appointee to HHS’ Administration for Children and Families and an LGBTQ and immigration reform advocate; and Patrick Grady, winner of the Mr. Double L Leather contest in Rehoboth Beach and an organizer of Mid-Atlantic Leather Weekend for the past 12 years who has raised hundreds of thousands of dollars for various LGBTQ nonprofits.

Also being honored are Jorge Hernandez, the creator of drag queen Sylvanna Duvel, an LGBTQ and HIV-prevention advocate and the force behind the first-ever Latino Drag Brunch, and Samantha Master, a board member of Serving and Mentoring Youth Advocates and Leaders, and director of strategic initiatives at Black Women’s Blueprint, an organization fighting sexual and interpersonal violence in black communities through a human rights framework.

The annual event also honors Engendered Spirits, or individuals who have made significant contributions to the transgender community. This year’s recipients of the Engendered Spirit Award are Karen Kendra Holmes, one of LGBTQ Nation’s “Top 50 Successful Transgender Americans You Need to Know,” a board member with the Retired Senior Volunteer Program, and chapter president of the Transgender Veterans Support Group; and Linda Roberts, a board member and treasurer of LGBTQ Catholic organization DignityUSA and co-leader of the Transgender Support Caucus, who travels the globe teaching people about what it means to be transgender.

Bianca Humady Rey, a longtime volunteer and the chair of Capital Trans Pride, will receive the Bill Miles Award for Outstanding Volunteer Service, which acknowledges exemplary contributions to the annual celebration of Pride in the nation’s capital.

Pixie Windsor, the owner of vintage furnishing store Miss Pixie’s, is being honored with the Larry Stansbury Award for Outstanding Service to the LGBTQ community, for her support of local nonprofits, including Casa Ruby, Food Rescue US, and Martha’s Table, as well as her work as an advocate for various causes, including HIV prevention, breast cancer prevention, the homeless community, transgender rights, and other LGBTQ issues.

“We’re excited to honor the volunteers, advocates, and activists that continue to raise the bar of community engagement, leadership, and giving in the national capital region,” Ryan Bos, the executive director of the Capital Pride Alliance.

The Capital Pride Heroes Gala is on Thursday, June 7, at 7 p.m. at 880 P, an outdoor rooftop venue at 880 P St. NW. For more information on awardees and other Capital Pride events, visit capitalpride.org.

Related: Capital Pride 2018’s theme “Elements of Us” will focus on diversity