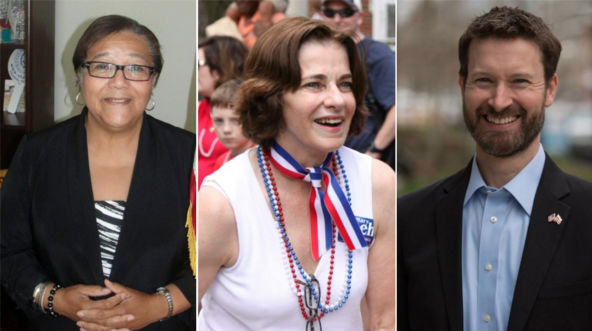 Three incumbent D.C. Councilmembers running for re-election have earned perfect ratings on GLAA’s election-year questionnaire ahead of the District’s primary election on June 19.

Councilmembers Anita Bonds (D-At-Large), Mary Cheh (D-Ward 3), and Charles Allen (D-Ward 6) all earned perfect +10 ratings on a scale of -10 to 10 relating to their positions on LGBTQ and other social justice issues. Of those three, only Cheh is running unopposed in the primary.

In the mayor’s race, incumbent Muriel Bowser earned a +7, due to her history of support for LGBTQ rights as both mayor and as the former Ward 4 Councilmember. GLAA noted in its writeup of ratings that Bowser agrees with the organization on several issues, but lost points for failing to provide concrete details for improving employment among underrepresented communities and combating pay-to-play practices.

Bowser’s primary opponents, James Butler and Ernest Johnson, earned ratings of +6 and +5, respectively. GLAA notes that Butler’s understanding of transgender issues could be stronger, and expressed concerns over the conflation of sex work — which GLAA wants to see decriminalized — and sex trafficking. Butler has some record supporting LGBTQ issues as a lawyer in human rights cases. Johnson has no known record of LGBTQ issues, but submitted a questionnaire expressing support for many of GLAA’s preferred positions on various issues.

GLAA also rated candidates from other political parties, including the Statehood-Green Party’s mayoral candidate Ann Wilcox, who did not return a questionnaire, but earned a +0.5 based on a limited record that is generally favorable to the LGBTQ community.

Libertarian mayoral candidate Martin Moulton, himself an openly gay man, was given a +2.5 rating for disagreeing with GLAA on a number of issues, including promoting public health resources such as PrEP, housing for LGBTQ seniors, and sealing court documents relating to legal sex, gender, and name changes. But GLAA noted that he “provided some positive substance in his questionnaire and has a fair record supporting LGBTQ individuals.”

In the Council Chairman race, Democrat Ed Lazere earned a +7.5. In the race for one of two At-Large seats, Statehood-Green candidate David Schwartzman earned a +7.5, Democrat Jeremiah Lowery earned +7, and Democrat Marcus Goodwin and Libertarian Denise Hicks did not respond to the questionnaire.

In Ward 1, Democrat Lori Parker earned a +1.5 for differing with GLAA on a number of issues, while Democrat Sheika Reid did not respond to the questionnaire. In Ward 5, Democrats Gaye Hall-Carley, Nestor Djonkam, LaMonica Jeffrey, and Bradley Thomas, as well as Statehood-Green candidate Joyce Robinson-Paul, did not respond to GLAA’s questionnaire, which was mailed to all candidates who qualified for the primary ballot.

Finally, in Ward 6, Democrat Lisa Hunter, who is challenging Allen, earned a +6.5 on her questionnaire, and was given points for her pro-LGBTQ advocacy in the area of public health. Michael Bekesha, the only Republican candidate running for any city office this cycle, did not submit a questionnaire and earned a rating of zero.

John Riley is the local news reporter for Metro Weekly. He can be reached at jriley@metroweekly.com
← Previous Story Capital Trans Pride takes place May 19-20
Next Story → Federal judge in Gavin Grimm case rules transgender students are protected by federal law