The latest Star Wars boasts messy action, a dozeworthy plot, and a leading man with all the charisma of a nerfherder 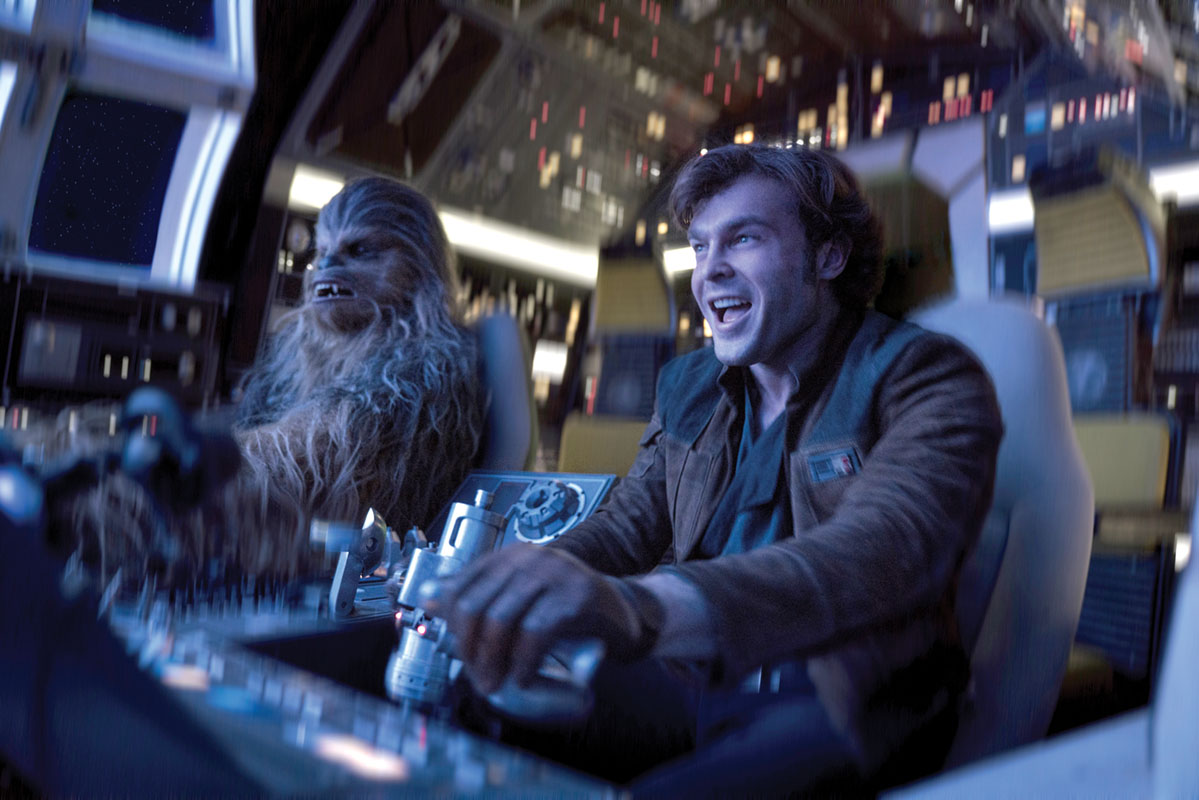 Alden Ehrenreich is Han Solo and Joonas Suotamo is Chewbacca in Solo: A Star Wars Story

The Force doesn’t have to be with you to see where Disney is headed with Solo: A Star Wars Story (

). The goal, publicly unspoken but likely whispered about in the company’s Sacred Halls of Avarice, is clearly to create a spin-off series. For dozens of “Solo Stories” to come, we’ll watch, 3D glasses firmly affixed, as Han and Chewbacca genially swindle their way across the galaxy, generating mischief, saving and wooing random heroines, jetting about in the Millennium Falcon, and avoiding every brush with death until we get to the point where their paths cross with Luke, Leia, and Darth.

Frankly, if Disney is going to make Solo a lasting, endearing series, they’re going to have to do a lot better than Han’s first solo outing, in which mediocrity triumphs over quality. Compared to nearly every other Star Wars film (save the horrid Phantom Menace), Solo is a nerf’s turd, polished until it gleams.

It’s hard to discern the blame for the mess. Original directors Phil Lord and Chris Miller were abruptly fired mid-production over “creative difference,” and Ron Howard was ushered in to salvage the endeavor. Howard is a competent enough director, but he’s way out of his league in blockbuster territory. Action is not his forte — Disney should have begged Spielberg to come aboard, or the Russo brothers, or, hell, Jordan Peele. Howard proves himself nearly as inept as George Lucas at creating clear, uncluttered action sequences, whether it be a droid rebellion or the Millennium Falcon fending off a giant, tentacled space thingamajig. With the exception of an early train sequence that is genuinely, spectacularly thrilling, everything else about the film’s action is a joyless shambles. 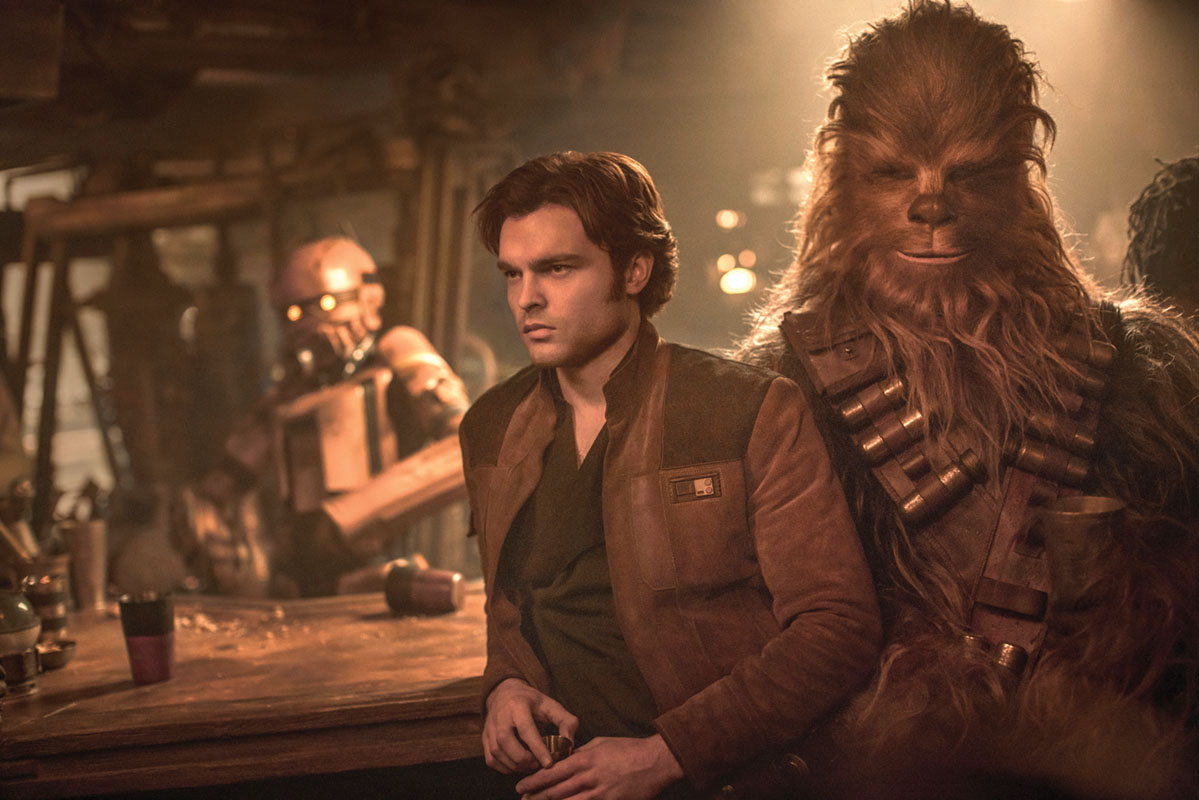 Alden Ehrenreich is Han Solo and Joonas Suotamo is Chewbacca in Solo: A Star Wars Story

Solo differs from prior Star Wars movies in that it’s the first to go fully linear with its narrative. There’s no cross-cutting from one environment to the next, no scattering of characters so that they all predictably reunite in a rousing finale. It starts with Han, middles with Han, ends with Han. The script, by Lawrence Kasdan — who penned The Empire Strikes Back, still the canon’s pinnacle — and his son, Jonathan, who once wrote for Dawson’s Creek, is about as uninspired as they come. The pair throw in just enough twists, turns, and “OMG” reveals to make us think we’re seeing something enlightening and fresh, but we’re not. It’s all smoke and mirrors, as the screenwriters are forced to nudge the story toward a specific, preordained endpoint.

It’s also unforgivably dull, when it should be positively electrifying. It doesn’t help that the film arrives on the heels of two brilliant summer movie offerings — the poignant and thrilling Avengers: Infinity Wars, and the deliriously entertaining Deadpool 2. Everything might have been different if it weren’t for Solo‘s biggest flaw of all — the imploding star at its center: Alden Ehrenreich, who might as well be the black hole of acting.

Whatever executive had the notion that Ehrenreich could remotely begin to match the charisma and roguish charm of Harrison Ford should be relegated to producing My Little Pony movies for the rest of their career. Where Ford brought humor, sex appeal, and depth to Han Solo, Ehrenreich brings an arched eyebrow, an idiot’s grin, the sex appeal of seaweed, and the ability to recite dialogue as convincingly as soggy cardboard. Ford was a true movie star. Ehrenreich is in a movie.

There are some scattered good points. We get a lot of Chewbacca, which is never a bad thing. Donald Glover absolutely nails Lando — he’s got the suave and likeable slipperiness that Billy Dee Williams coined a long time ago, in a movie theater far, far away. And there’s a captivating new droid, L3-37 (sarcastically voiced by Phoebe Waller-Bridge), hellbent on freeing all of droid-dom from servitude. (You wonder if she shouldn’t make the time-space jump over to the Terminator series.)

Han has a pre-Leia love interest — Qi’Ra, played by Emilia Clarke as a bland mashup of the latest trilogy’s Daisy Ridley and Rogue One‘s Felicity Jones. A middling Woody Harrelson, an excellent Thandie Newton, and a blase Paul Bettany round out the cast. Bettany, so good as Vision in the Avengers films, plays Dryden Vos, the ruthless head of the notorious Crimson Syndicate, as though he’s auditioning for a musical parody of Scarface. The performance isn’t merely appalling — it’s shameful.

“I’m an outlaw,” insists Han to Qi’Ra, who smiles and fires back, “I may be the only person in the galaxy who knows who you really are — the good guy.” Indeed, the movie bears this out in its one genuinely clever moment — a moment that points, with unsubtle irony, to Han’s eventual destiny. We can only hope that Disney stops the madness now and leaves Solo as just that: a solo outing. We don’t need another hero.

Randy Shulman is Metro Weekly's Publisher and Editor-in-Chief. He can be reached at rshulman@metroweekly.com.
← Previous Story Report: Number of LGBTQ characters in Hollywood films fell in 2017
Next Story → Drag Race’s Alaska Thunderfvck to star in final “Sharknado” film