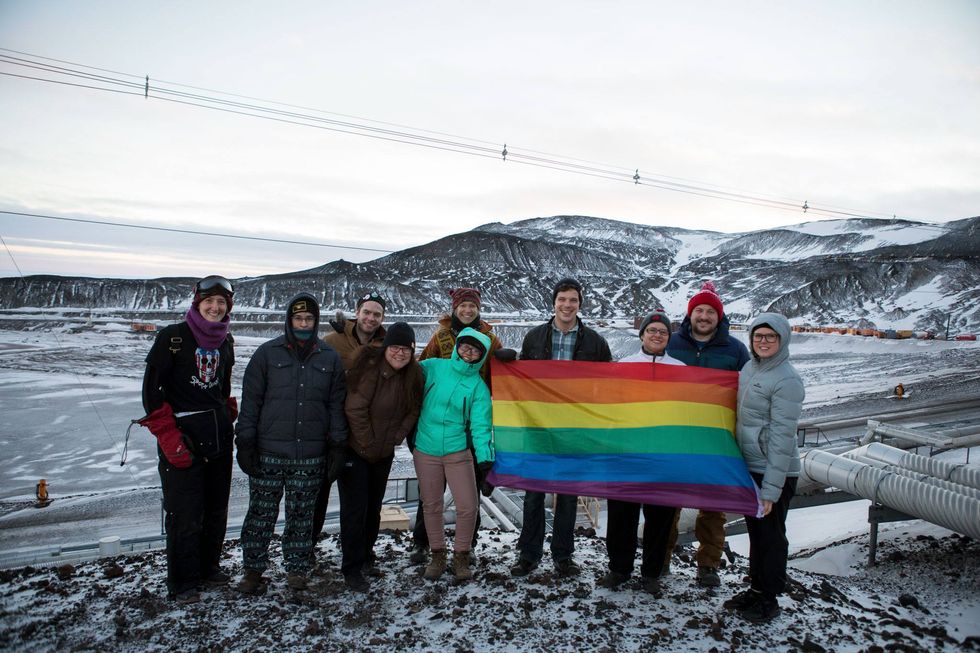 LGBTQ people in Antarctica are coming together to host the continent’s first Pride celebration.

Ten workers at the United States’ McMurdo Station stood together with a rainbow flag to take a photo before Pride month in June. The picture was taken in April because the station, which is 850 miles from the South Pole, will be dark for 24 hours a day by June.

“Why not take this photo and let people see that there’s queer representation — even at the end of the earth,” Shawn Waldron told NewNowNext.

The station’s LGBTQ workers host events every few weeks and are planning to hold an official Pride event in June.

Galley worker Evan Townsend said that he wanted the photograph of the group to show young LGBTQ kids that they can go anywhere regardless of identity, including to an unclaimed land of ice and rocks.

“There was nobody I could look to and say, ‘Oh, that’s what I can do,’ because even for me, the idea of traveling alone was such a distant concept,” he said. “So just having an example of somebody who travels and can have those adventures would’ve been a great thing for me as a kid but even more so being able to see that there are queer people out there who are proud of their queerness and that in no way inhibits them from living these adventures.”

There are currently 133 people operating McMurdo Station during the continent’s winter months. Once summer arrives in October, that rises to about 900 people.

The station’s atmosphere makes LGBTQ people feel comfortable being themselves and allows them to connect while they’re on the most isolated continent in the world, according to Waldron.

“My biggest fear before I left was, ‘I’m going to be the only gay person, there’s going to be no one else here,'” he said. “I was wrong.”

Antarctica has previously been hailed by Planting Peace as the “world’s first LGBT friendly continent,” declaring in 2016 that Antarctica has full human rights for LGBTQ people who visit or work there.

The president and Founder of Planting Peace Aaron Jackson traveled around the continent with a rainbow flag, telling The Huffington Post that it was to display visibility for LGBTQ rights.

“I travelled to Antarctica to play a role in spreading visibility for the need for basic human rights for the LGBT community,” he said. “It was an honor to carry the Pride flag throughout Antarctica, and Planting Peace will not stop fighting for LGBT rights until all sexual and gender minorities experience full, fundamental rights in every corner of the world.”