Ambridge Event Center says the church broke their contract over the center's attempts to rehab its image, costing it money 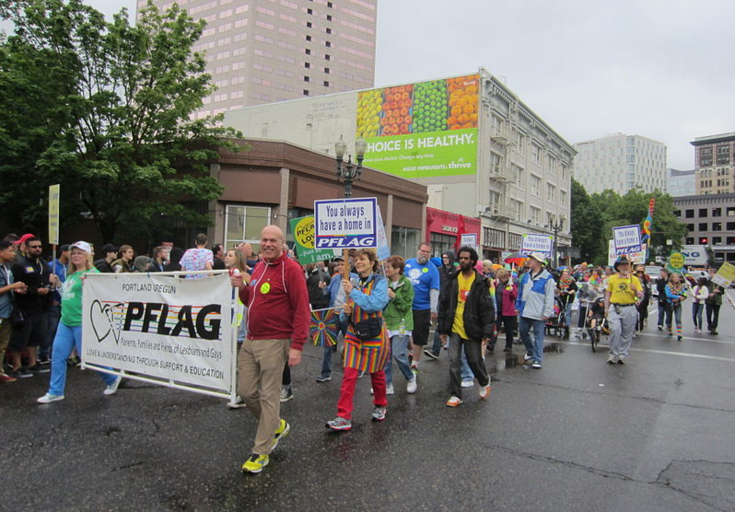 Members of PFLAG Portland march in the 2014 Portland Pride Parade – Photo: Another Believer, via Wikimedia.

An Oregon business is suing a church that it rented a building from, claiming that the church’s prohibition on allowing LGBTQ groups to use the space damaged its reputation and cost it a substantial amount of money.

The Ambridge Event Center had rented out a large space in downtown Portland for conventions, parties, and weddings, reports The Oregonian.

The building’s owner, Holy Rosary Church, forced Ambridge Event Center to agree to a strict “morals clause” in its contract under which it was forced to turn away business from the LGBTQ community — or any other group whose mission the church morally objects to — according to the lawsuit.

In February 2015, the Ambridge Event Center told the PFLAG Portland Black Chapter that it couldn’t rent out the space for the group’s annual party due to the morals clause. The rejection generated backlash not only from the LGBTQ community, but the wider Portland community, leading others to disassociate themselves from the center.

In an attempt to rehabilitate its reputation, the event center apologized to the PFLAG Portland Black Chapter and offered to hold the party for free. It also took other steps, such as hiring Gary Sorrels, an openly gay events coordinator.

In response, Holy Rosary Church sent the center a notice to vacate the premises.

In the lawsuit, the Ambridge Event Center claims the church evicted it in retaliation for hiring Sorrels “and because Ambridge had chosen to associate itself with the LGBTQ community.” The center is seeking more about $2.3 million, which includes lost income, reimbursement for property taxes it was forced to pay, money spent on building improvements, interest, and lawyers’ fees.

In its lawsuit, Ambridge claims Holy Rosary “breached the Contract by refusing to discuss or mediate the Contract termination with Ambridge, by issuing unilateral restrictions on use of the Event Center and adjoining property, by demanding Ambridge pay taxes not owed under the Contract, and by failing to exercise any effort, best or otherwise, to reach an amicable and mutually agreeable solution to the issues arising under the Contract.”

Ambridge also claims the church breached other parts of the contract under which it agreed to discuss and “jointly and amicably” resolve any conflict between the two entities, or any change in its relationship with the center. Because it did not receive substantial notice, Ambridge says it had continued to book events at the building, and subsequently lost money when it was forced to cancel the events due to the eviction.

Sia Rezvani, a Portland attorney representing the church, has declined to comment on the lawsuit.

Under Oregon law, it is illegal to discriminate against someone based on their sexual orientation. But no official complaint was ever filed against Ambridge Event Center or Holy Rosary Church for turning away the PFLAG group, according to the Oregon Bureau of Labor and Industries.

Christine Lewis, the legislative director for the Bureau of Labor and Industries, told The Oregonian that whether a church can refuse to allow LGBTQ groups to rent out spaces in buildings it owns depends on “the unique facts of each case.”

According to a religious exemption contained in Oregon’s civil rights law, a church may discriminate based on sexual orientation with respect to renting out its properties if “the use of facilities is closely connected with or related to the primary purposes of the church … and is not connected with a commercial or business activity that has no necessary relationship to the church or institution.”

John Riley is the local news reporter for Metro Weekly. He can be reached at jriley@metroweekly.com
← Previous Story Man arrested for allegedly stabbing gay couple outside Denver nightclub
Next Story → Report: LGBTQ students in Oregon experiencing rise in violence and harassment