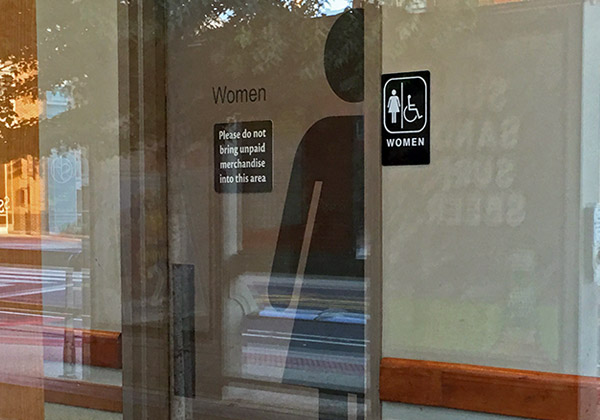 A new poll finds a slim majority of Massachusetts voters are opposed to a ballot measure that would repeal some protections for transgender residents.

The poll, by WBUR and MassINC Research, finds that 52% of voters would vote against an upcoming ballot measure that repeals protections for transgender people in public accommodations, while 38% would vote for repeal.

Under the provisions in the law, passed in 2016, transgender people are allowed to use public restrooms, locker rooms, and other facilities that match their gender identity. It also prevents them from being discriminated against in other “public accommodations,” which include other spaces like department stores, malls, delis, restaurants, package stores, and doctor’s offices.

Massachusetts passed an earlier law in 2012 that included protections for transgender people in employment and housing but omitted public accommodations. That law was never challenged.

But opponents of the 2016 law have collected a sufficient number of signatures to repeal it. The coalition pushing the measure, called Keep MA Safe, has invoked a “bathroom panic” defense, arguing the law makes it easier for sexual predators to enter restrooms and locker rooms and prey on children or vulnerable woman. They say the law makes “whole segments of the population feel unsafe and exploits their privacy and security.”

Opponents of the ballot measure say the outcome of November’s vote could be crucial, because if a transgender law is defeated in “liberal” Massachusetts — where most voters are Democrats or Democratic-leaning independents — it is likely that Republican-leaning states will introduce similar ballot measures en masse. Voters in Montana are currently debating their own 2018 ballot initiative restricting transgender people’s ability to access to public restrooms.

According to the WBUR poll, conducted from May 22-26, support for the repeal measure is strongest among Republicans, 49% of whom support repeal and 38% of whom oppose it.

Forty-one percent of politically “independent” men support repeal, as do 37% of independent women, and 36% of Democratic women.

Slim majorities of independent men and women oppose the measure, compared to 56% of Democratic women. Only 28% of Democratic men support repeal, with 60% opposed. The poll has a 4.4% margin of error.

Several LGBTQ groups have organizers on the ground working to defeat the measure. They also balk at the emphasis that opponents, news outlets, and even pollsters like MassINC have placed on restrooms over other public accommodations.

“This poll shows that a majority of Massachusetts voters support upholding the transgender nondiscrimination law that has been in effect for nearly two years. Despite the poll’s emphasis on restrooms, this law is about so much more, providing basic protections that allow transgender people to go about our daily lives by prohibiting discrimination in stores, restaurants, doctors’ offices, and other public places,” notes Kasey Suffredini, the president of strategy at Freedom for All Americans and co-chair of Freedom for All Massachusetts.

“But we take nothing for granted,” added Suffredini. “We know opponents of the law will use misleading tactics to misrepresent what the law does. We are doing everything to go door-to-door and have conversations with as many residents as possible about who transgender people are to ensure that in November, Massachusetts residents vote yes to continue protecting their transgender friends, neighbors, and coworkers from discrimination and preserve fairness and respect for all.”

Fran Hutchins, the deputy director of Equality Federation, and a resident of Easthampton, Mass., issued a similar statement.

“The majority here and nationwide agree that all of us, including transgender people and their families, should have a fair opportunity to thrive,” Hutchins said. “We take nothing for granted and will continue building support by sharing our stories and encouraging people to vote.”

See also: Discrimination against transgender renters is prevalent, even in Massachusetts