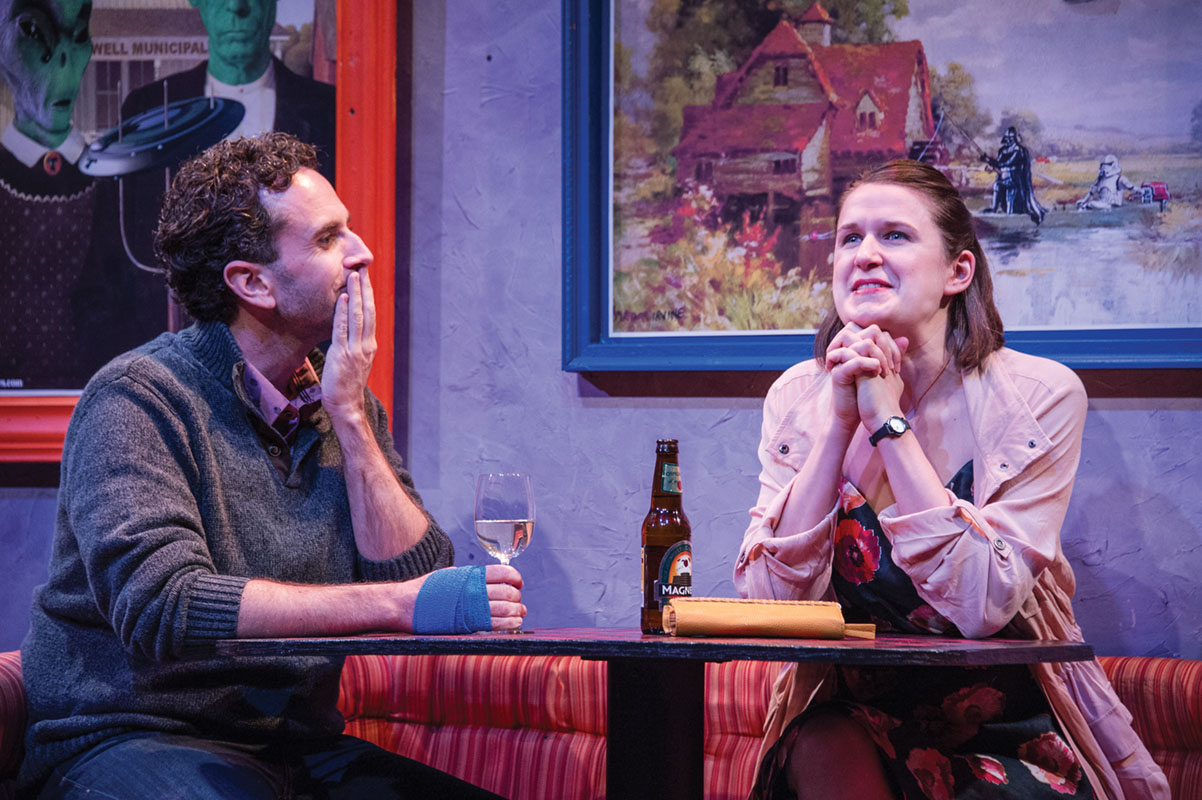 ) is a small-scale comedy with large ambitions of tackling conundrums like sex, love, and human relationships. It’s staking its shot in Keegan Theatre’s world premiere production, directed by Shirley Serotsky, and unfortunately lands off the bullseye. The prevailing sense is that the paint’s still fresh on this one, although the vibrant cast is headed in the right direction.

First among them, John Loughney has a tight handle on the role of sociologist Jeff, one of two bachelor roommates whose hapless dating lives will intersect in what are intended to be hilarious and illuminating ways. Josh Sticklin’s performance as journalist Ben, the other half of this odd couple, registers as less defined.

But Jeff and Ben, and Loughney and Sticklin, do have chemistry that’s abetted by their yin-yang appearance and energy, one unflappable, the other much more excitable. Working in different styles, and in separate space for most of the first act, they’re introduced as Jeff and Ben both go on dates, on the same night, at different restaurants. They pair up for laughs and a few surprises with respective partners Brianna Letourneau as Leslie, and Shanta Parasuraman as Molly.

Matthew J. Keenan’s purple-toned slabs of wall, and checkerboard floor disguise a rotating set designed to accommodate swift switches between the two dates. When the actors, and sound and stage crew nail these transitions, they work like quick cuts in a movie to fuel comedy and tweak meaning. However, the timing doesn’t always serve the script. And worse, Paul Callahan’s lighting design casts a daunting hue over the entire set. It appears these dates are going down in bad restaurants, which might or might not serve the script, but certainly doesn’t serve the aesthetics of the play.

Ben and Molly’s date, despite being the most disastrous, or rather because it is, proves to be the most fun for the audience. The two, who met online, quickly reveal to one another their skepticism about online dating, and from there escalate to a contrived misunderstanding about sex that Sticklin and Parasuraman nevertheless build into a winning set-piece.

Parasuraman, a delight in Studio’s recent hit The Wolves, has the makings of a fine screwball comedienne. Her Molly could have carried more of this story, but alas does not. The spinning restaurant booth instead serves up Jeff and Leslie skipping past first-date weirdness to third-date familiarity. They hit a roadblock, though, trying to navigate around fifth-date intimacy — and likewise, Loughney and Letourneau don’t float these scenes too far off the ground. 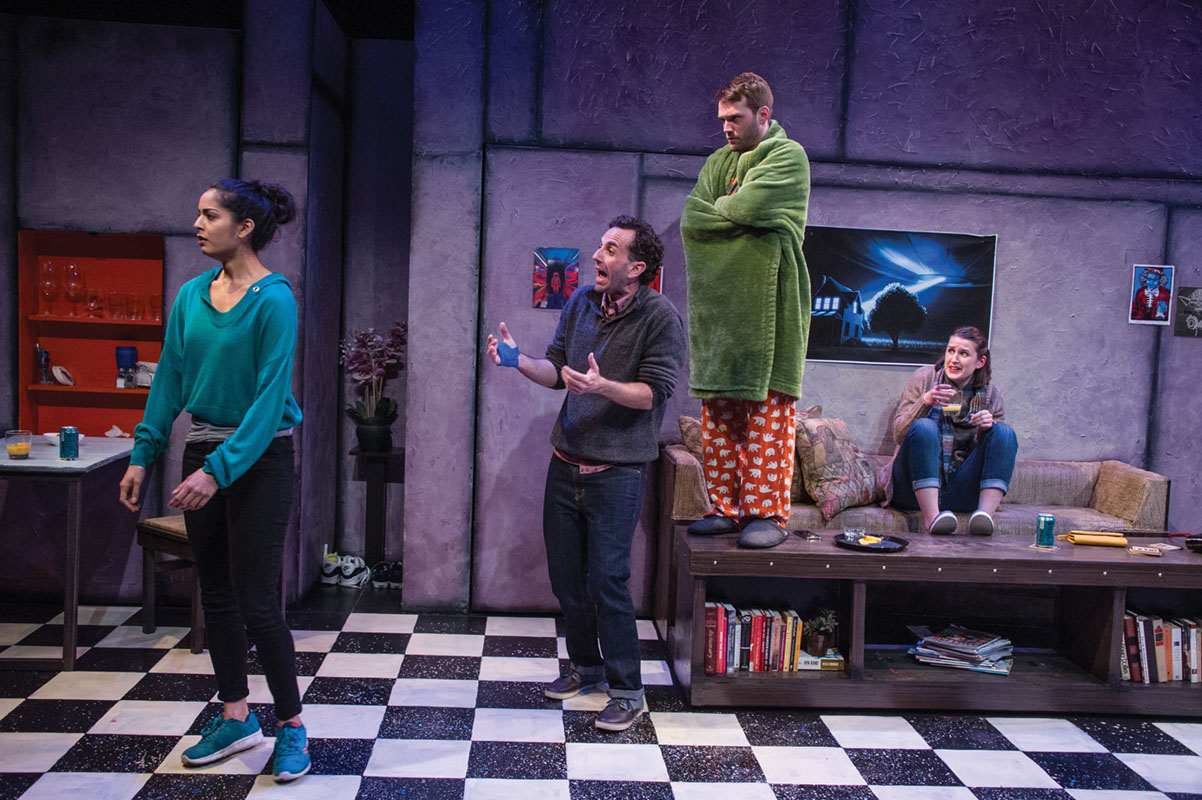 Then comes the story’s twist, and with that, Other Life Forms diverts from its lighthearted path of awkward dates and examining the mores of modern courtship, to pondering deeper questions about how humans connect, and why some connections click and others fail.

An extraterrestrial might be involved, but the drama never takes on the tone of science fiction. There’s a mild frenzy of folks showing up to Ben and Jeff’s unexpectedly, including the restaurant waiter (Aidan Quartana, doing a lot with a few lines), but the feeling doesn’t quite fit farce.

McCoy does make the giant leap of sending one of the characters over the fourth wall and into the audience, a flourish that the director and performer carry off skillfully. The jarring reflexivity forces a remove that aids in probing the play’s meaning. The problem is that McCoy doesn’t uncover much meaning, beyond the insight that fear holds people back.

Armed with all the cosmic possibilities of its characters and premise, Other Life Forms ultimately goes where many men and rom-coms have gone before, delivering lessons we might already have seen Sandra Bullock or Matthew McConaughey or Kate Hudson learn a dozen times.

Other Life Forms by Keegan Theatre

André Hereford covers arts and entertainment for Metro Weekly. He can be reached at ahereford@metroweekly.com. Follow him on Twitter at @here4andre.
← Previous Story Stage Review: The Legend of Georgia McBride at Round House
Next Story → Mona Mansour’s “The Vagrant Trilogy” explores how our choices impact the rest of our lives