Mamma Mia 2 aims for the sewage system, where it gleefully cavorts for two mind-numbing hours.

Sequels are rarely better than the originals. Since the bar was already at ground level for the 2008 jukebox musical Mamma Mia!, the only place left to go was subterranean. Within minutes, Mamma Mia! Here We Go Again (

) aims for the sewage system, where it gleefully cavorts for two mind-numbing hours.

Astonishingly, there’s even less of a storyline in this Mamma Mia than in the first. In that outing, you’ll recall, winsome Sophie (Amanda Seyfried) was on a quest to ferret out the true identity of her father — was it Harry (Colin Firth), Sam (Pierce Brosnan), or Bill (Stellan Skarsgård) who impregnated the free-spirited Donna (Meryl Streep) all those years ago? (So much time could have been saved had Sophie dropped a few bucks on 23andMe.) Ultimately, it was determined that all three would serve as dearest daddy, setting the stage for an eventual sitcom comeback for Paul Reiser.

The new movie picks up a year later. Donna is dead, presumably the victim of having had to watch the first film. Sophie has renovated the hotel in her honor, and is planning a big grand opening. A storm threatens to derail the festivities, and all the guests cancel. But what’s this? Boatloads of Greek fishermen, who all happen to know the words to “Dancing Queen,” save the day by ensuring Sophie’s mountains of food and rivers of alcohol won’t go to waste. There’s a lot of pointless hand-wringing as to whether or not “My Three Dads” or Grandma Ruby (Cher) will bother to come, but at least mom’s old pals are there — Rosie (Julie Walters, the film’s only minor miracle) and Tanya (Christine Baranski), who gets to utter side-splitting howlers like “Be still my beating vagina.”

Perhaps realizing he needed a second sheet of paper for his plot, director Ol Parker trades in his frequent flashbacks miles so we can learn exactly how young Donna (Lily James, who, admittedly, has a lovely smile and an even lovelier voice) was swept off her feet by Harry, Bill, and Sam, allowing all three to participate in a new carnival game called “Hit the egg! Win a baby girl!” I can’t fault Mamma Mia on its sex-positive message. I just wish someone had had the sense to use a condom.

Once again, ABBA’s songs are forcibly wedged into the story, creating moments that are patently absurd. Obviously, musicals don’t have to adhere to reality, but Mamma Mia! Here We Go Again goes way too far. The biggest doozie is “Waterloo,” which is so embarrassing to watch, you’re better off staring at your popcorn. By the time Cher erupts into “Fernando,” any hope for redemption is lost. It’s topped by a climax where a spectral Streep finally re-enters the picture for three inglorious minutes, in what amounts to a very expensive walk-on. At one point, Streep smiles knowingly at the camera, as if to say “Joke’s on you. Where’s my million dollars?” 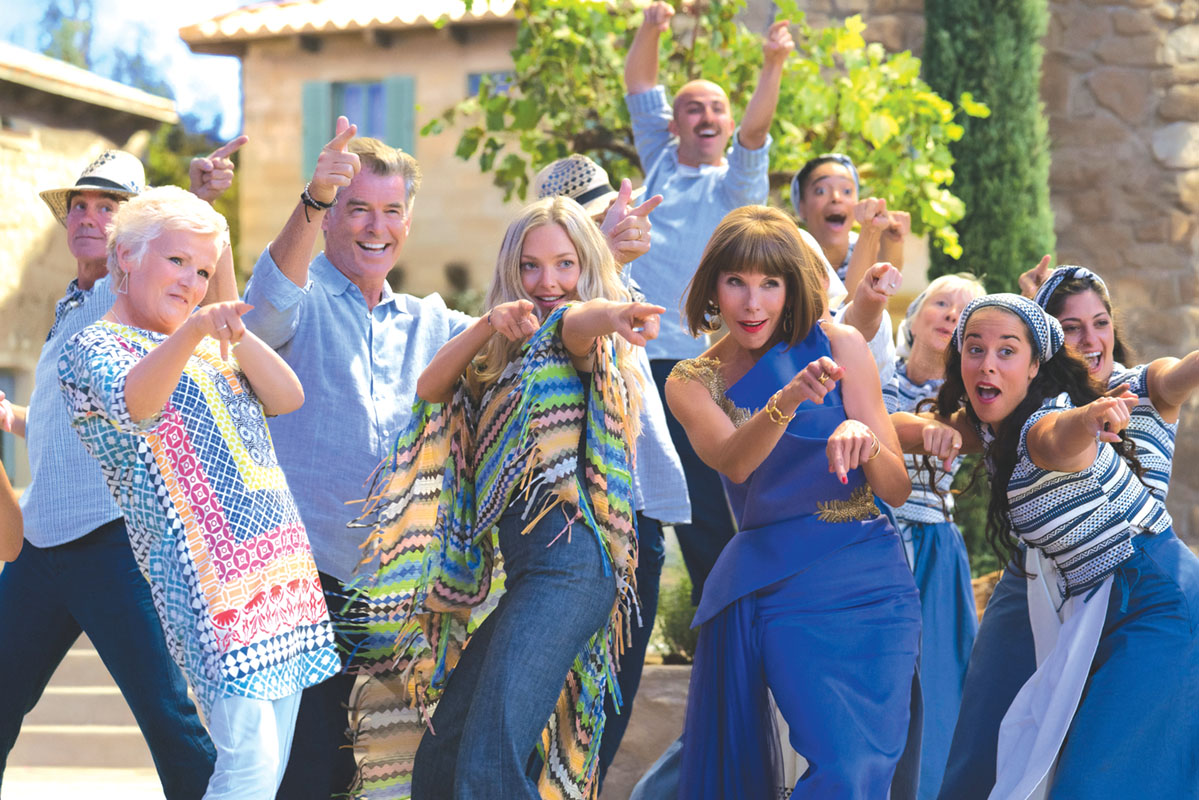