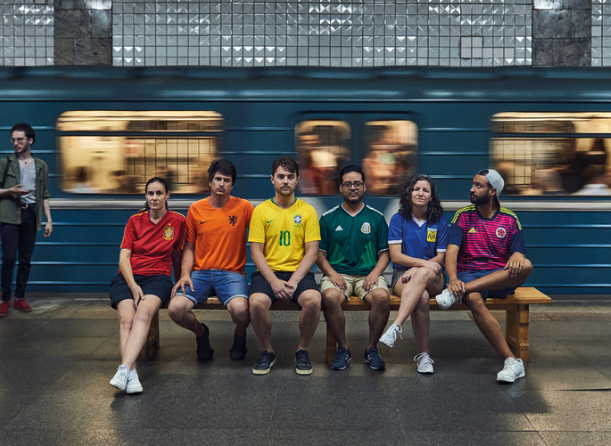 A gay Colombian who took part in a viral protest of Russian LGBTQ laws by ‘hiding’ a rainbow flag in public was detained by Russian authorities for 15 hours.

Mateo Fernandez participated in a campaign where he and five others walked around the Russian city of Moscow during the World Cup.

The group arranged themselves so that the soccer jerseys from their home countries created a Pride flag — something which is banned in Russia under the country’s strict “gay propaganda” law.

However, while trying to return to Paris, Fernandez was detained in the airport for almost a day.

Fernandez told Gay Star News that authorities did not give him a reason as to why he was being held or why his belongings had been confiscated. He was then detained in a small room for 15 hours.

“At first it was like, ‘don’t worry you’re not in trouble, we just want to ask a few questions,’” he said. “They never told me why I was detained. They demanded to know why I was here. Over and over they asked. It was nerve-wracking.”

During questioning, Fernandez stuck to the group’s planned story that they were “friends from different countries touring Russia.”

“They either weren’t understanding or they weren’t happy with the answer,” he said. “I cried like three times. I thought they were locking me up there forever.”

Fernandez received his phone after about five hours. He declined help from the agency that put together the protest, saying it would only look more suspicious. He was released at 5 a.m. the following morning, eleven hours after his original flight left.

Eloi Pierozan Junior and Guillermo León, two protest participants from Brazil and Mexico respectively, said that everyone else involved made it home without incident.

Despite his experience at the airport, Fernandez said the hidden flag protest was “completely worth it.”

“Russian people have said to us they are very thankful we did this,” he said. “Even if the pictures hadn’t got the press and attention it has, we have to do what we can to show people care.”

Despite LGBTQ soccer fans being “strongly” warned not to “publicly display sexuality” when traveling to Russia, some activists took the risk to protest Russia’s treatment of queer people.

British activist Peter Tatchell was shown in a video with a sign reading, “Putin fails to act against Chechnya torture of gay people” on the opening day of the World Cup. Several police officers took Tatchell to a police station, where he was later released.