Sign, which went up on June 27, called being LGBTQ "a hate crime against God" 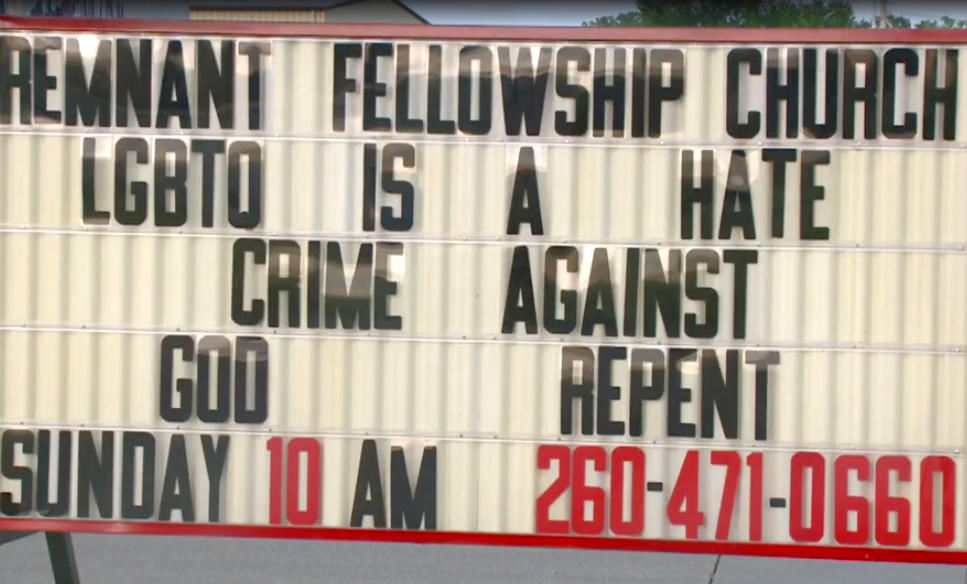 A church that erected a sign calling on LGBTQ people to repent has been evicted from their current headquarters, reports Indiana ABC affiliate WPTA 21.

A member of the Remnant Fellowship Church confirmed to WPTA that the church had been forced to leave its headquarters in Auburn, Ind. The congregant did not comment on whether the church has plans to relocate elsewhere.

On June 27, the church posted a sign reading “LGBTQ is a hate crime against God. Repent.”

The sign stirred a great deal of controversy, with several people — including some who oppose homosexuality but thought that the sign was in poor taste — arguing that it should be taken down. Some argued that the sign paints a negative image of Christians. Still others agreed with the message and said the sign should be allowed to stay up.

WPTA previously spoke with a pastor at the church who said the message was an attempt to “…reach young people and steer them away from a lifestyle they believe is harmful to them.”

In an interview with the Fort Wayne-based WANE/NewsChannel 15, Robert Sturges, an elder at Remnant Fellowship Church, echoed the pastor’s arguments, arguing that the sign simply conveys what the Bible says about homosexuality.

“We’re trying to reach a certain group of people,” Sturges said. “They’re being told in our culture that homosexuality, transvestites, lesbianism, and sexual immorality is OK. But the Bible clearly says that those who practice these things will not inherit the Kingdom of God. In fact, it warns them that the wrath of God will abide upon them. And in the judgment, they will be lost and they will be sent to hell forever. We believe that. That’s our faith.”

At the time, Sturges insisted that his church does love gay people, but can’t deny their religious beliefs.

“We do love them,” he said. “But we want to warn them that they are headed toward a cliff and if they keep going that way, they’ll be destroyed. And that is what the sign is about.”

See also: Anti-gay pastor will have to relocate his church after praising murders of Orlando shooting victims