The native Michigander won the crowd over with his piano renditions of various pop melodies, including "My Neck, My Back"

On Sunday, Jeremy Sherman had the audience at U Street Music Hall in the palm of his hand. The hall was almost completely silent as the native Michigander and recent D.C. transplant sat at an electric keyboard and quietly crooned an acoustic cover of Lady Gaga’s “Edge of Glory.”

When he stood up from the piano, half the audience was on its feet, cheering, whistling, and waving handmade signs bearing well-wishes and various Jewish puns (including one about gefilte fish) urging the audience members to cast their votes for Sherman, including one sign reading “Jeremy Sherman is My President.”

Such was the scene on Sunday, July 15 at the second annual Mr. Nice Jewish Boy DC pageant, where the 25-year-old Sherman vied against three other contestants for the titular honor to a packed house. For those who purchased their tickets at the door, it was standing room only inside the hall.

While Sherman made an impressive bid for the title in the talent portion of the competition, he had to contend with Zach Levine’s ballad version of Robyn’s “Dancing On My Own,” Micah Ramsey’s drag number as “Madame Shewitz,” and Jeremy Bauer-Wolf’s Jewish pun-filled stand-up routine. All four men also had to participate in a joint opening number, where they showcased their dancing moves as they gyrated to Fifth Harmony’s “Work from Home,” dressed in hard hats, work boots, and skimpy construction worker vests.

“I think everyone brought their best talents and skills to the competition, but I felt really good about my talent, and my answers in the question-and-answer session with the judges,” Sherman said after the show. “I definitely brought a lot of energy to the competition.”

After audience votes (cast via an online balloting system) and judges’ scores were tabulated, Sherman was named the winner and crowned by the reigning Mr. Nice Jewish Boy DC — and this year’s emcee — Tony Cohn. Sherman’s three fellow pageant participants cheered, clapped, and danced in the background as “Hava Nagila” played in the background during the crowning. 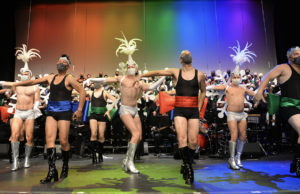 After the competition, all four contestants continued dancing on stage to Whitney Houston’s “It’s Not Right, But It’s Okay” as they waited around to take pictures with audience members who had purchased VIP tickets.

“I think what Jeremy did that went over really well was that his personality came across really strongly in his talent,” says Jeremy Gilston, runner-up in 2017’s Mr. Nice Jewish Boy DC pageant and chief organizer of the 2018 pageant. “His personality shone through the entire competition, and the audience was able to fall in love with him.”

Gilston also praised runner-up Levine, as well as Ramsey and Bauer-Wolf, for providing an afternoon full of laughter and entertainment, adding: “It was a very close competition, and they’re all real winners.”

The annual pageant, a project of Nice Jewish Boys DC, seeks to raise money for local LGBTQ community organizations. Proceeds from this year’s event will benefit Keshet, an organization that designs programs, weekend retreats, and even summer camp for LGBTQ-identifying Jewish youth. In total, the Nice Jewish Boys DC organization raised over $4,000 — more than twice what it raised last year.

“The show went almost flawlessly. We had some minor AV hiccups, but that’s to be expected, and we rolled with the punches and had an awesome time,” Gilston says. “We had such a good planning committee that helped make the planning process easier. And members of the community really stepped in to make this well-oiled machine go.”

He says he’s already looking forward to next year’s competition, adding that it’s his intention to make the Mr. Nice Jewish Boy DC pageant “bigger and better” with each successive year. 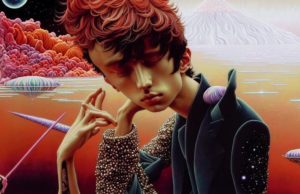 He says that, as a relative newcomer to D.C., he knows that there are many individuals who haven’t yet gotten involved with either the Jewish or LGBTQ communities because they are new to the District or haven’t been reached out to by local organizations.

“There’s so many people, like me, who have not been involved with this community, but should, and deserve to,” he says. “We need to build a bigger tent, a bigger umbrella for everybody. And as a new person myself, I want to help do that.”

Sherman adds that his focus as the reigning Mr. Nice Jewish Boy will be on promoting intersectionality and building relationships between Nice Jewish Boys DC and other community groups.

“I’m so grateful for everyone who came out today,” he adds. “The Jewish community, the gay community, all my friends and supporters, who regardless of their identity, came and supported me. I want to thank them for being champions of me and for letting me be my authentic self.”