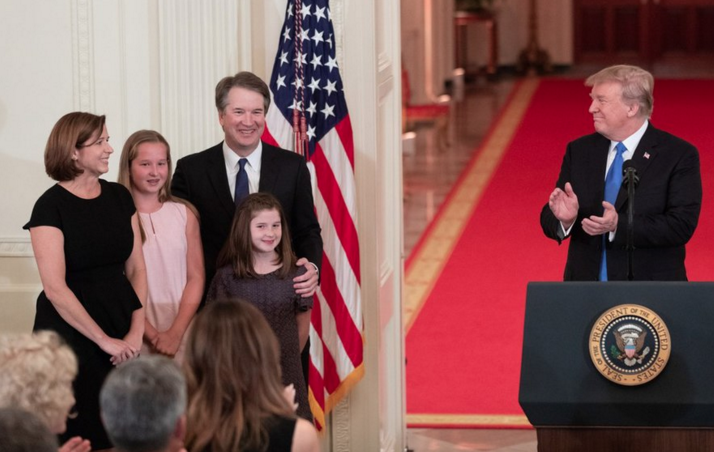 In nominating Kavanaugh, Trump described him as “one of the finest and sharpest legal minds in our time,” and promised that he would set aside his political views and strictly interpret the Constitution “as written.”

Kavanaugh, 53, previously served as an aide to President George W. Bush before being confirmed to the D.C. Circuit by a Republican-led Senate in 2006, just months before Democrats took control in that year’s midterms.

In the late 1990s, Kavanaugh was a principal actor in the investigation, led by independent counsel Kenneth Starr, looking into whether then-President Clinton had lied about an affair with intern Monica Lewinsky. Kavanaugh was a co-author of the Starr Report, which urged Congress to impeach the president, and, according to the Boston Globe, suggested a list of questions probing into the most graphic details of Clinton’s affair in order to embarrass the president and force him to admit he perjured himself in lying about the affair.

But after serving under a Republican presidential administration, Kavanaugh appeared to have a change of heart about whether a sitting president should be indicted while in office or impeached. In an article for the Minnesota Law Review, he argued that a president should not have to face either civil lawsuits or criminal investigations while in office because they would be “time-consuming and distracting.”

That’s a pronouncement that’s already raising red flags, particularly among Democrats who are pushing for at least two investigations of Trump: one looking into whether he violated the emoluments clause of the U.S. Constitution, and a separate, ongoing one looking into whether the Trump presidential campaign colluded with Russian government agents or pro-Putin sympathizers to influence the outcome of the 2016 election.

Democrats are particularly apoplectic over the prospect that Kavanaugh, if confirmed, may be called upon to weigh in on any legal challenges related to special counsel Robert Mueller’s investigation into the president’s ties to Russia. According to Heavy.com, presidential advisors to Trump looked closely at Kavanaugh’s writings on presidential indictments when deciding from among four finalists for the Supreme Court seat.

For members of the LGBTQ community, Kavanaugh’s nomination is potentially troubling, as he’s previously made rulings that have given excessive deference to concerns about so-called “religious freedom,” starting with a case involving a challenge to the Obama Department of Health and Human Services’ mandate that employers provide coverage for contraception in their employee health insurance plans, and another involving whether prayers should be included as part of presidential inaugurations and the inclusion of “so help me God” in the official presidential oath. Historically, such legal interpretations giving deference to “religious freedom” have been used to elevate the concerns of religious conservatives over others and to justify anti-LGBTQ legislation.

Daniel Goldberg, the legal director of the liberal judicial advocacy group Alliance for Justice, previously told NBC News that none of Trump’s final four nominees “has demonstrated a commitment to giving a fair hearing to LGBTQ Americans.” He also cited Trump’s nominations of lower-court judges with anti-LGBTQ records as evidence that the president “has made clear…his contempt for the rights of LGBTQ Americans.”

But Carrie Severino, chief counsel and policy director of the conservative Judicial Crisis Network (and, notably, wife of Trump’s head of the Office for Civil Rights at the Department of Health and Human Services) has dismissed any talk of anti-LGBTQ animus as “scare tactics.”

She told NBC News in that same article that none of President Trump’s final four nominees have a track record on deciding cases that explicitly deal with LGBTQ rights, so “we don’t really know what their position is.”

Another red flag for some LGBTQ groups is that Kavanaugh’s nomination to the D.C. Circuit received support from the Family Research Council, a conservative organization that opposes any acknowledgement of or expansion of LGBTQ rights. While it is unknown whether Kavanaugh shares the group’s views, some activists are likely to point to the FRC endorsement as evidence that the judge harbors secret animus toward LGBTQ people.

In any case, Kavanaugh’s nomination is guaranteed to stir up the passions of those on both sides of the political aisle, particularly in a midterm election year when Democrats are hoping to wrest control of the House and Senate from Republicans.

For those on the political right, the successful confirmation of Kavanaugh is the final step in achieving what they hope is a fait accompli: cementing in place a right-wing judiciary, at both the local and federal levels, that will create new legal precedents striking down most of the progressive political achievements made over the last century, or preemptively blocking liberal-leaning policies from taking effect.

For those on the political left, the confirmation of a second Trump nominee by a Republican-led Senate would be salt rubbed into an exposed wound, serving as a reminder of how they got steamrolled and outmaneuvered by Senate Republicans, whose delaying tactics were rewarded by voters through the election of President Trump.

But Democratic leaders hope that, this year, they can stall or block a vote on a Supreme Court nominee until well after the midterm elections, and use the looming threat of a potential Kavanaugh confirmation — and the resulting political fallout from it, including the overturn of civil rights, abortion rights, labor rights, and LGBTQ rights — to motivate voters to the polls and put Democrats in control of the Senate.

Shortly after the president’s announcement, Senate Minority Leader Chuck Schumer (D-N.Y.) said he would oppose the nomination “with everything I have.” Democratic rising star Sen. Elizabeth Warren (D-Mass.) tweeted: “Brett Kavanaugh’s record as a judge and lawyer is clear: hostile to health care for millions, opposed to the CFPB & corporate accountability, thinks Presidents like Trump are above the law – and conservatives are confident that he would overturn Roe v. Wade. I’ll be voting no.”

Brett Kavanaugh's record as a judge and lawyer is clear: hostile to health care for millions, opposed to the CFPB & corporate accountability, thinks Presidents like Trump are above the law – and conservatives are confident that he would overturn Roe v. Wade. I'll be voting no.

Sen. Kamala Harris (D-Calif.), another rising star whose name has been bandied about as a possible 2020 Democratic nominee, announced she would also oppose Kavanaugh’s confirmation.

Trump’s Supreme Court Justice nominee, Judge Kavanaugh, represents a direct and fundamental threat to the rights and health care of hundreds of millions of Americans. I will oppose his nomination to the Supreme Court. #SCOTUSpick

House Minority Leader Nancy Pelosi (D-Calif.), who is trying to lead Democrats to victory in this year’s midterms, cast the choice of Kavanaugh as an attempt by President Trump to reverse a “generation of progress for workers, women, LGBTQ people, communities of color & families, & to radically reverse the course of American justice & democracy.”

.@realDonaldTrump is using this nomination as a destructive tool on a generation of progress for workers, women, LGBTQ people, communities of color & families, & to radically reverse the course of American justice & democracy. #WhatsAtStake #StopKavanaugh https://t.co/lUDbzInQZ3 pic.twitter.com/oq6954uChh

Editor’s note: This post was updated to include additional reaction from congressional Democrats.

John Riley is the local news reporter for Metro Weekly. He can be reached at jriley@metroweekly.com
← Previous Story Indiana church that put up anti-gay sign gets evicted from its building
Next Story → LGBTQ groups blast Trump’s Supreme Court nominee Brett Kavanaugh