Stuart Dinenno called the couple's marriage "foolish" and a "delusion"

A landscaper in Atlanta, Ga., refused to work with a gay couple because he believes their marriage is “very perverse and foolish.”

Stuart Dinenno, of Botanica Atlanta Landscape Design, made the comments in a post on Yelp, after Colton S. of Sandy Springs wrote a review complaining about Dinenno’s discrimination, Towleroad reports.

“Contacted today about a very large project in Sandy Springs,” Colton wrote. “The owner asked if the work was for me and my wife, I said no me and my husband and he replied that he wouldn’t be interested in working with us.”

“Yes, this is an accurate description of what happened,” Dinenno wrote. “When doing a large landscaping project it is necessary to work with the homeowners closely over several months through the design and installation phases.

“I can’t do that, all the while going along with the delusion of two men calling themselves a married couple, with one man referring to the other man as his husband,” he continued. “It’s very perverse and foolish, and needs to be called out as such.” 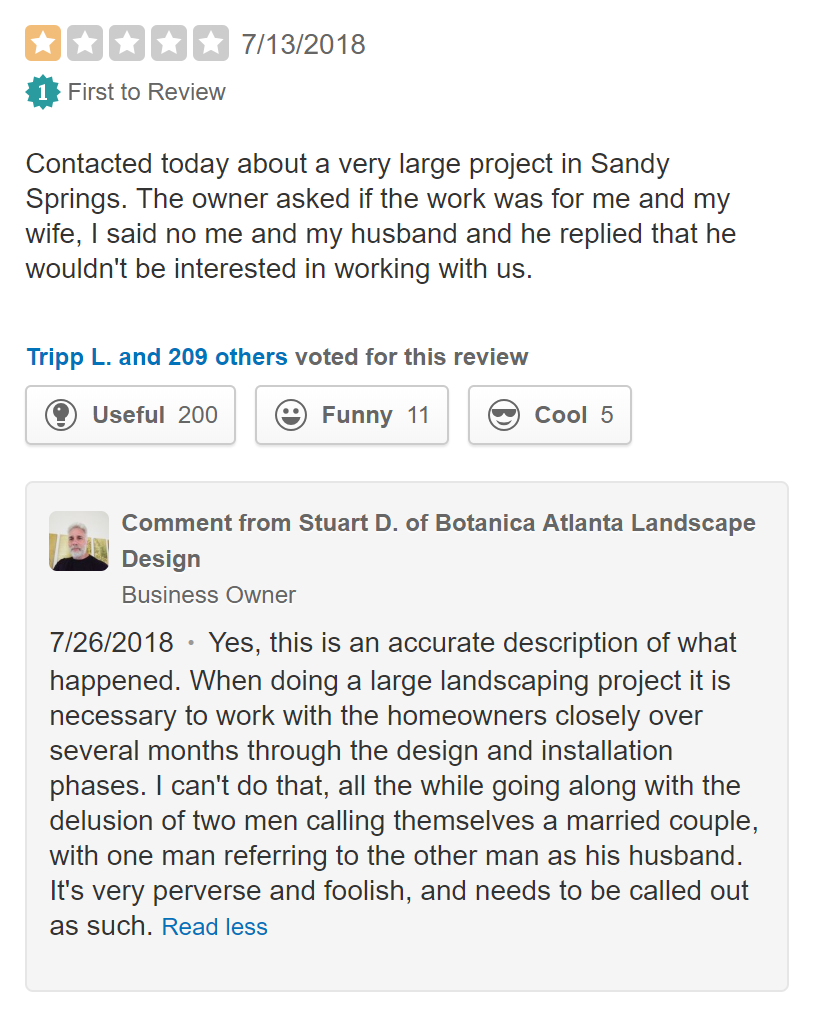 Yelp is currently on “Active Cleanup Alert,” according to the site, after a flood of negative reviews criticizing Dinenno’s views.

One reviewer called his response “disgusting,” saying his services were “contingent on fleeting, bigoted beliefs.” Another wrote that it “must be nice to be so righteous that you can afford to refuse business.”

The state was in the news earlier this year after the Georgia Senate passed a bill that allowed adoption and foster agencies to discriminate against LGBTQ people and same-sex couples.

And last year, Republican State Rep. Betty Price was slammed after asking whether HIV-positive people could be quarantined as a way of stopping the spread of the virus.

The American Medical Association advocated in a June report for removing gender markers from the public portion of birth certificates, recommending that data on gender be made available for medical and statistical use only.

According to the report, removing a person's sex designation from the public portion of birth certificates would have little to no impact on data collected for medical, public health, and statistical purposes.

While current AMA policy does not address removing sex from the public portion of the birth certificate, the organization does recognize that a person's assigned sex at birth may not always match their gender identity, and thus, supports "every individual's right to determine their gender identity and sex designation on government documents and other forms of government identification."

Both men say they worry about being discriminated against or harassed if forced to "out" themselves under the policy.

Two transgender men have are suing West Virginia state officials over a policy blocking them from changing the gender marker on their birth certificates to reflect their gender identity.

While that means the department has the power to change the gender markers on their own, without a court order, the department has instead used the decision to justify its refusal to amend trans residents' birth certificates altogether.