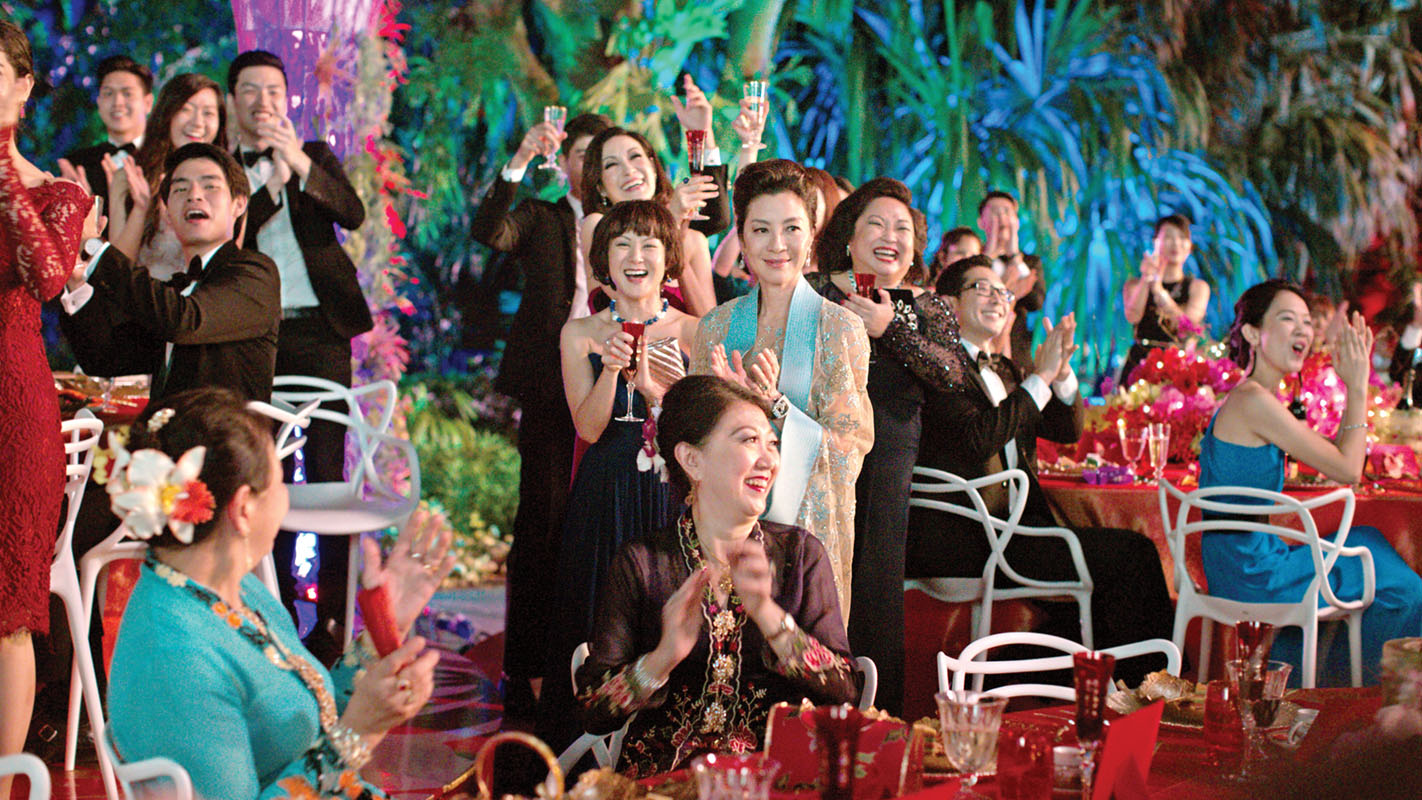 Crazy Rich Asians (★★★★) announces with its title and opening scene its mission — brazen for Hollywood — to center a mainstream film around a predominantly Asian cast. Then the film, based on the wildly popular best seller by Kevin Kwan, quickly gets down to the business of being a lively, luxurious, oft-hilarious romantic comedy.

Playing up the light farce of a bigot getting served his comeuppance by the regal Michelle Yeoh, the brief London-set prologue introduces the sometime action star as the imperious Eleanor Young, grande dame of a crazy rich, old-money Singapore family. Eleanor’s son, Nick (Henry Golding), grows up to be a fine man, in more than one sense of the word.

Nick happens to be the favorite grandson of Eleanor’s mother-in-law, Ah Ma (Lisa Lu), the Young family’s true grande dame. Due to his status as the chosen one to eventually control the family’s vast real estate fortune, all hell breaks loose after Nick returns to Singapore with his new fiancée, Rachel. Not only is Rachel an American-born Chinese, but she’s the humble daughter of a working-class, immigrant single mom.

Of course, as an Economics professor at NYU, Rachel is no slouch, and she’s also delightfully embodied by Constance Wu, star of the ABC sitcom Fresh Off the Boat. Wu smoothly adjusts her comic rhythms to light romance, essaying a sweet and resilient heroine attuned to the peppy energy that director Jon M. Chu draws out of the story, cast, and luxe clothes and locales. The soundtrack of fizzy pop and jazz, most of it sung in Mandarin or Cantonese, adds to the siren appeal of all the glamour and opulence.

Rachel experiences culture shock venturing into Nick’s rarefied world, but she, as Chu also must intend for the audience, is too dazzled to be mad that Nick hid his wealth from her. He had his decent-guy reasons for the deception, and the movie sticks with him as a sincere love interest for Rachel, who otherwise is thrown to the wolves — Nick’s rude or condescending relatives, conniving exes, jealous stalkers, and various blockers who have their reasons, too.

The film acknowledges but doesn’t pick apart the intricacies of large-scale class warfare. Instead, it focuses on Rachel standing up to relentless pressure, and a parade of put-downs, intended to break her spirit and her engagement to Nick. Yet, for all the weight of tradition and classism driving the drama, the film is as frothy and fun as it could be.

Wu anchors an ensemble that boasts quite a few rapid-fire jokesters, including comedians Ken Jeong and Ronny Chieng, who deliver consistently. As Rachel’s best friend, Peik Lin, rapper and actress Awkwafina makes a stronger impression here than earlier this summer alongside Sandra Bullock and crew in Ocean’s 8. 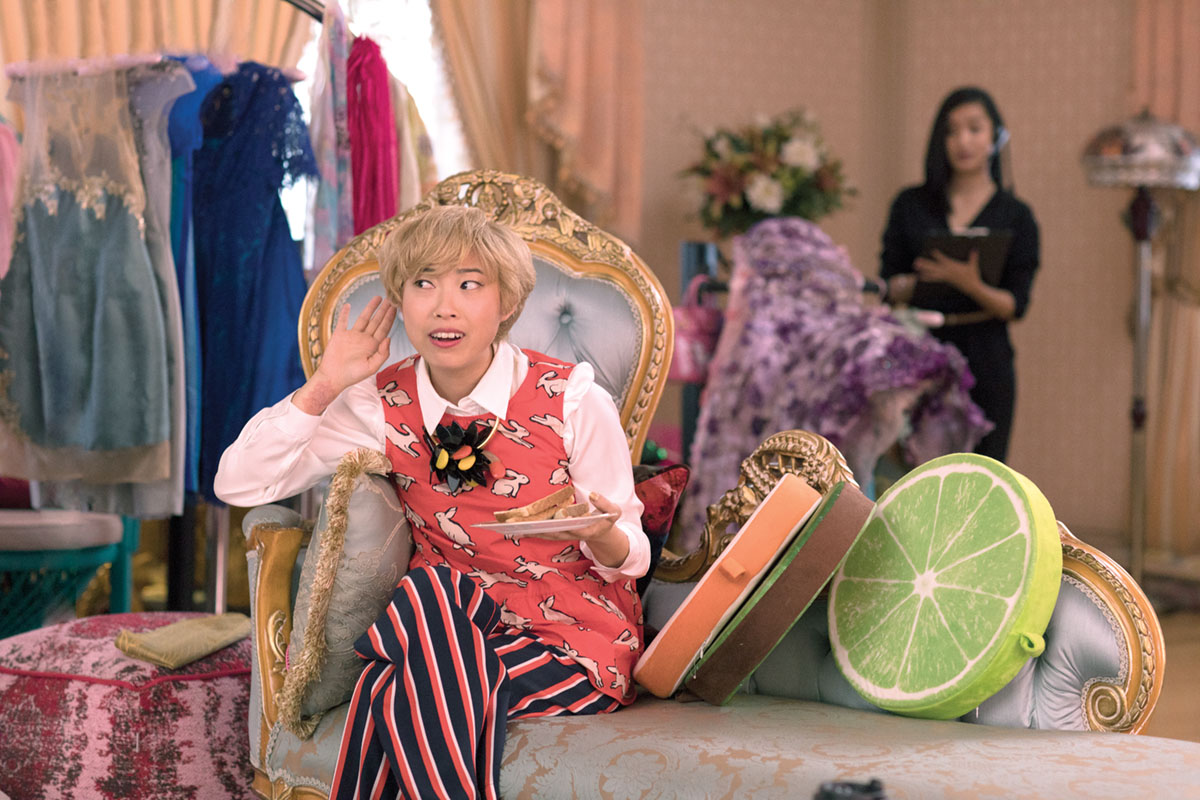 Partly it’s Peik Lin’s colorful, outrageous style that sets the character apart, but really it’s Awkwafina’s bouncy swagger. Unlike other characters in Nick and Rachel’s circle, Peik Lin is one-hundred percent authentically herself, yet always still jovially flexible, ready for whatever life or the party throws at her. Ever-resourceful, she keeps an impressive array of wardrobe choices in the trunk of her Audi.

The film’s side-trips to the ostentatious crib of Peik Lin’s nouveau riche family are the best satire that Chu and the script, by Adele Lim and Peter Chiarelli, have to offer. Those scenes also set up a loving surrogate home for only-kid Rachel in a story that’s so expressly concerned with living within, or without, the embrace of family.

It’s worth noting that Crazy Rich Asians might challenge a few conventions that older generations hold dear, but it’s a family-friendly flick. Nick and Rachel’s romance is chaste enough for grandma, with the two pictured waking up in bed together wearing pajamas and underwear.

Content to forgo heated clenches, the movie derives its sex appeal from the conspicuous consumption on display, the mansions and supercars, jewels and fashions. Chu even dishes up a fashion makeover montage that, at least in this context, makes sense for a girl who packed a suitcase full of what one character calls her “Gap look.” Luckily for Rachel, she’s welcomed by Nick’s clotheshorse cousin Astrid (Gemma Chan).

As the family’s unhappy princess, Chan swans through scenes swathed in Dior and warmly sells the idea that people so flagrantly wealthy might be caring and generous. However, she and Pierre Png, as Astrid’s husband Michael, don’t really sell the couple’s side-drama of infidelity and resentment. Crazy Rich Asians is not about tearing down the fantasy, but about the extravagance.

And that extravagance surrounding Rachel is a lot for her to live up to. The same could be said of the film, which must live up to the expectations of author Kwan’s legions of fans. Readers have continued to follow the romance and adventures of Rachel and Nick, and their families and friends, through two sequels, which easily could beget sequel films to this soapy, smile-inducing soon-to-be hit.

André Hereford covers arts and entertainment for Metro Weekly. He can be reached at ahereford@metroweekly.com. Follow him on Twitter at @here4andre.
← Previous Story Disney’s first prominent gay character will be played by a straight actor
Next Story → Glenn Close: “I think it’s really limiting to say ‘You can only play who you are'”