Constellation opens their Epic Love season with the lovely longing of Melancholy Play: "A Contemporary Farce"

It’s wistful and poetic, but Sarah Ruhl’s Melancholy Play: A Contemporary Farce (★★★½) is no sob story. In fact, Nick Martin’s fresh staging of Ruhl’s first full-length play lives up to the comedic spirit of its subtitle. The production likewise lives up to the adventurous spirit of Constellation Theatre, a company that consistently takes playful risks with high-concept material.

This farce revolves around Tilly, an inadvertent enchantress who longs to feel melancholy and cries perfect rivulets of woeful tears in her all-out effort to achieve sadness. Maybe she just wants to dance with gloom and heartache, or merely feign the depth of someone who’s substantial enough to be miserable. But Tilly can’t quite shake her upbeat air to bring herself totally down. And in the process, she attracts the ardor of a raft of admirers, women and men, all drawn to her bright-eyed sadness.

Described as a river her admirers have yet to swim in, Tilly is played by the aptly appealing Billie Krishawn, who does cry angelically and on-cue. If a person can seem like a Tilly, then her performance captures it, amusingly so. Krishawn’s Tilly swans across her therapist’s couch, or atop her tailor’s step-stool, leading an ensemble that stirs up slapstick with romance and repartee.

John Austin supplies passion and innocence as Frank, the tailor who falls hardest for Tilly. Christian Montgomery goes broadest with his performance as Tilly’s therapist Lorenzo, who hails from an “unspecified European country” and wields an exaggerated, vague accent to match his indeterminate origins. Montgomery swings big with the characterization, and hits more than he misses elaborating Lorenzo’s obsessions with Tilly and himself.

As with most of the cast, Montgomery shares a fine rapport with Krishawn, whose Tilly has to be a muse to many. Certainly she has the effect of discombobulating all who meet her, including a lesbian couple, Frances (Mary Myers) and Joan (Lilian Oben). Desiring Tilly delivers a pleasurable shock to the ladies’ systems that Myers makes quite funny, and Oben conveys especially well with her richly arch turn — her lingering pause or side-eye would make Eve Arden proud.

Struck by an urge to console Tilly, so beautiful when she’s sad, Joan epitomizes the questionable tendency of some romantics (or masochists) who seek out messes to clean up and care for. Ruhl relays the connection explicitly by making Joan a nurse, someone who cares for the broken and sick for a living. Adding a nice visual touch to the joke, Joan is dressed by costume designer Kitt Crescenzo in the white uniform of a WWII-era army nurse, complete with starched hat and jaunty blue cape.

Joan is here to save Tilly’s day — as long as the object of her affection stays darlingly despondent. Tilly discovers, as others have before her, that her admirers like her best when she’s forlorn and radiating need. They demonstrate little interest in a happy Tilly.

As the plot unfolds, Tilly yields less and less interest as a character, but not because of her mood swings. Rather, it’s because her wannabe sadness is so utterly self-absorbed. She more or less admits that fact, but the script doesn’t compensate with layers of sincere introspection or dimension. She doesn’t genuinely care enough about anyone or anything else to fully ingratiate herself to those not written to fall madly in love with her.

Tilly does, however, burst into song. Leaning on the melodically melancholy score by composer Wytold, the play swerves unsurely in its homestretch towards surrealism. Although Tilly, Lorenzo, Frank, Frances, and Joan potentially turning into nuts doesn’t push the play completely off the rails, that symbolic conceit, among others, comes close. Ruhl’s ruminations on the “disappearing emotion” that is melancholy get to be precious.

Thankfully, director Martin maintains a gentle, assured hand with the fanciful storytelling and lyrical language. He coaxes from his cast a complicity that keeps the comedy buzzing. They’re a dynamic ensemble, alternately funny and charming, though the characters aren’t that deep. Tilly and company do make swell canvases for projecting a mix of emotions as they swoon, cry, and kiss across one very helpful chaise, bathed in A.J. Guban’s gorgeous, atmospheric lighting.

The actors also get a major assist from musician Kate Rears Burgman, who performs Wytold’s score from a seat set slightly upstage from the action. The string player briefly speaks, entering the fray to kindly lament that it’s hard to play happy-sounding tunes on a cello. It must also be hard to shape a performance that seriously contemplates sadness while aiming for laughs, and the cast do better on the latter than the former, resulting in a solid farce that’s sometimes just trivially preoccupied with sorrow. 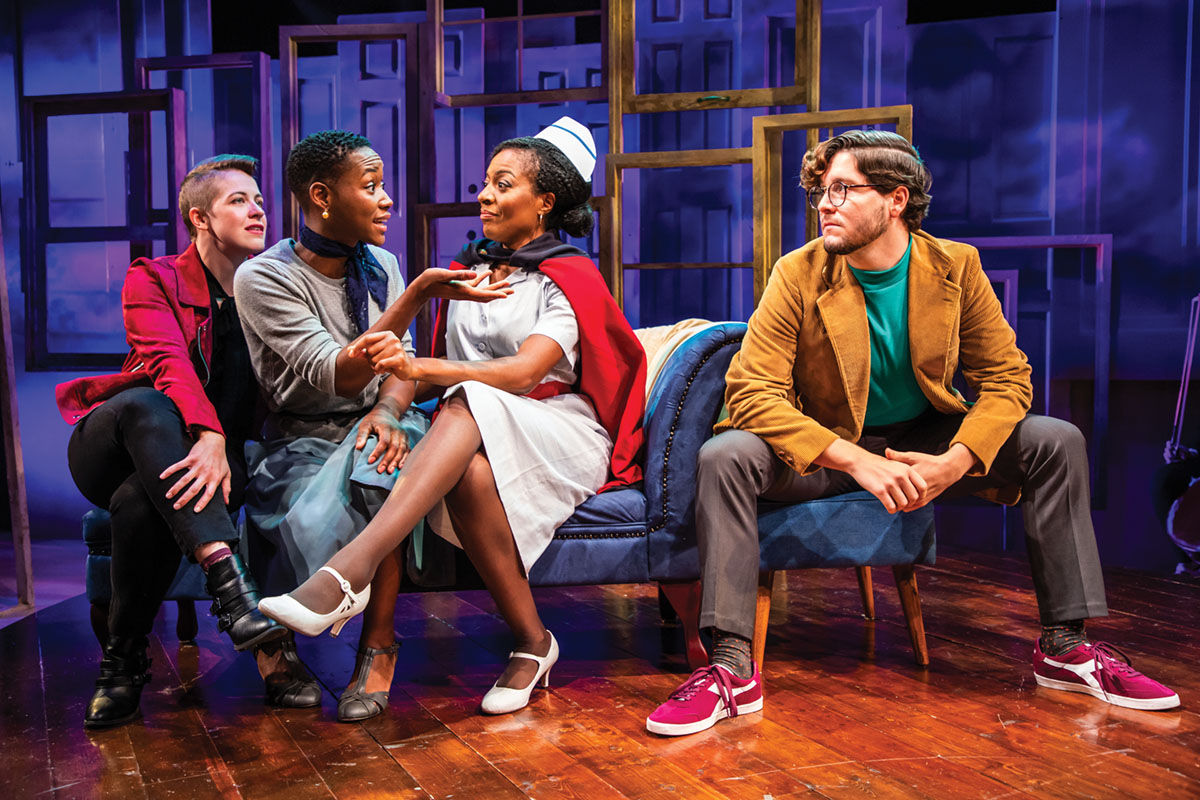 André Hereford covers arts and entertainment for Metro Weekly. He can be reached at ahereford@metroweekly.com. Follow him on Twitter at @here4andre.
← Previous Story Theater Review: The Color Purple at the Kennedy Center
Next Story → Rainbow Theatre’s “In the Closet” dares to be a different coming out story