The songs are a bit lackluster, but the comedy absolutely slays in Arena's movie-to-musical adaptation, "Dave"

Ivan Reitman’s Dave did respectable business at the box office when the comedy was released in 1993, but it’s far from being considered a quotable classic of Hollywood cinema. Instead, it’s remembered mostly as a decent Kevin Kline vehicle from an era rife with middling Kline-starring comedies (French Kiss, anyone?), and for Gary Ross’s Oscar-nominated screenplay about a presidential impersonator improbably called to the White House to impersonate the actual president.

Whatever its merits, the movie was nowhere near as hilarious as the new musical adaptation, Dave (★★★½), now up on its feet with a Broadway-bound production at Arena Stage. Thomas Meehan and Nell Benjamin, writers of the show’s snappy book, have constructed a solid, song-enhanced parable that director Tina Landau stages as a fast-talking screwball comedy.

Introduced as the titular Dave Kovic, a conscientious high school history teacher, leading man Drew Gehling seems at first improbable as a guy playing a guy who resembles a U.S. president. Then, the show brings Gehling out as Dave’s doppelganger, President Bill Mitchell, the type of politician who grouses about snowflakes, and the dual roles click. The actor’s (and Mitchell’s) resemblance to Speaker Paul Ryan sells the idea that a weenie like Mitchell might make it to the Oval Office.

Plying Dave’s aw-shucks earnestness opposite Mitchell’s polished sliminess, Gehling performs a winning double act as a comic foil to himself. The script also drums up drollery in the topical details and occasionally the jokes sting, with jabs at all sides of government, via the plotting of various White House players trying to wield the power of the Mitchell presidency for their own ends.

Parham and Sills pair wonderfully as the good-cop, bad-cop team in Dave’s corner. While she brings a bright wit and voice to her turn as a villain who views high crimes as Washington’s business as usual, Sills, a Tony nominee for The Scarlet Pimpernel, gradually twists the callous Alexander into knots that unravel delightfully in “Kill That Guy,” one of the show’s few standout songs.

The other truly distinctive tune belongs to Dave‘s leading lady, the President’s wife, Ellen Mitchell, who’s sung and embodied by Mamie Parris with the heart that the story’s romance requires. Ellen’s “The Last Time I Fake It,” is a fabulous tell-off that shimmies like Latin ballroom, though no one onstage is dancing that hard. Landau and choreographer Sam Pinkleton find crafty uses for the ensemble — as a swarm of reporters, or as a chorus line of Secret Service agents — but, in general, this musical’s moves are more Secret Service stiff than footloose and fancy free.

There might be more jazz in set designer Dane Laffrey’s circling walls of scenery. They add a Sorkin-esque West Wing dash to Landau’s movement of the characters through the White House, or in Gehling’s case, in and out of costume during quick, unseen changes between Dave and Mitchell.

The mechanics of the quick-changes and set moves most likely would differ for Broadway, as will perhaps the running time. If any production number should happen to get lost on the way to New York, it might well be “Presidential Party,” a goofy dream sequence of dancing dead presidents that even the best performers can’t kick into life.

The score, featuring lyrics by Benjamin and music by Tom Kitt, one of Landau’s collaborators on the Tony-winning hit SpongeBob SquarePants, isn’t bursting with hummable appeal, and the most memorable musical moment isn’t generated by one of their tunes. Dana Costello, onstage in a number of roles, brings laughs aplenty as a teen pop star who adds her own notes to “The Star-Spangled Banner.”

The songs (other than “Presidential Party”) tell Dave’s story simply, and the score does supply music for the characters who most urgently have something to say. That includes the President’s personal security detail, Secret Service Agent Duane Bolden (Joshua Breckenridge), who expresses the grievance of generations of servicemen in “Not My Problem.” Breckenridge, one of Broadway’s original Scottsboro Boys, contributes a quiet grace performing a man of very few words — usually, just the same three words, in fact.

The script is packed with juicy plums to ponder — “No one wants to admit they fell in love with an asshole” — while being laugh out loud funny. Peak TV, and the HBO series Veep, in particular, have set a high bar for depicting the halls of presidential power as a playground for broad comedy. Dave clears the bar with its cast, its message, and its humor, if not its songbook. 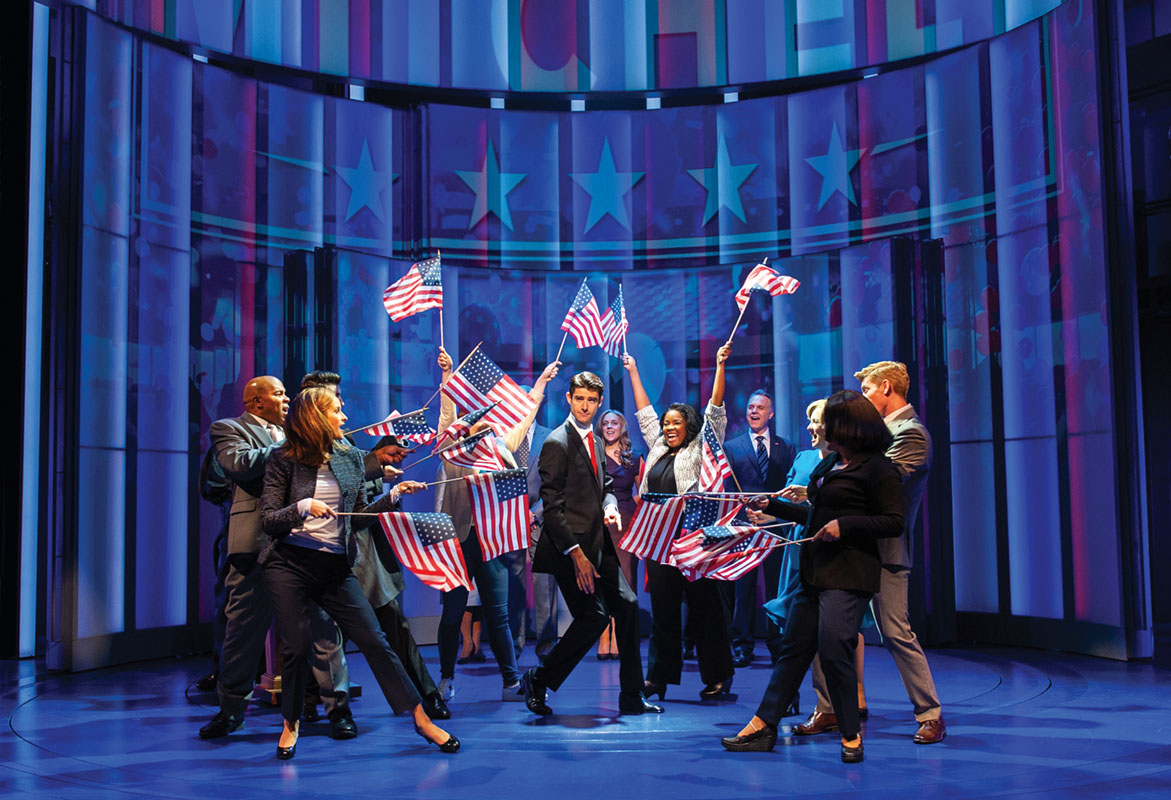