By John Riley on September 12, 2018 @JohnAndresRiley 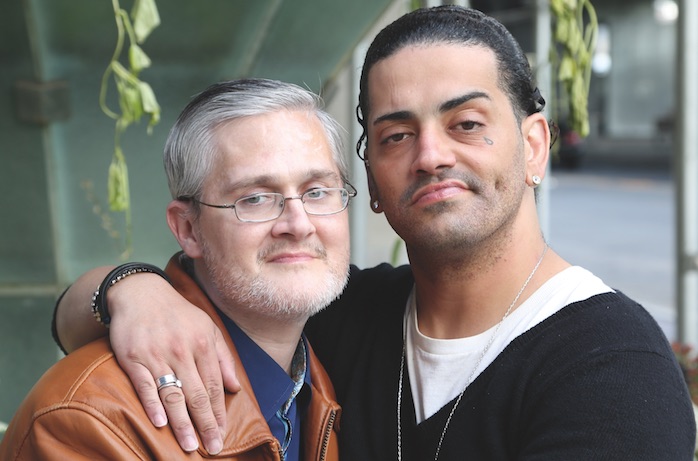 On May 9, 2014, Thomas Hamm went to visit his partner, listed in court documents as P.F., who is being held at Rikers Island.

He greeted his partner with a hug and a kiss, but was quickly warned by correction officers to stop embracing, even though other visitors were doing the same with their loved ones, and the DOC’s policy is to allow inmates and visitors to “kiss, embrace and hold hands.”

While visiting, the two were holding hands at the table where they were seated, just as other couples were. But the officers again approached Hamm and his partner, ordering them to stop holding hands and telling them: “We don’t want that faggot, gay shit in here.” The officers then abruptly ended the visit.

As Hamm was leaving the facility, one of the correction officers called him a “fucking faggot,” and said, “Fucking homosexual, who the fuck do you think you are?”, “You’ll burn in hell,” and “You people should be killed.”

That correction officer tried to provoke Hamm into hitting another officer, but when Hamm refused, another officer grabbed him from behind while two others repeatedly punched him in the head and kicked him.

Hamm was transported to the hospital, where he was treated for facial fractures and head trauma. While he was there, he was handcuffed to his bed. After being discharged, he was given an order banning him from visiting Rikers for 180 days.

He was then arrested and charged with third-degree assault and second-degree harassment, as the officers claimed that the 5’6″ Hamm had attacked them, and submitted false reports to that effect. The charges against Hamm were eventually dismissed.

In October 2015, enlisting the help of Lambda Legal, Hamm sued the city and the Department of Corrections, alleging that they violated his rights under the First, Fourth, and Fourteenth Amendment, as well as New York state’s civil rights law, when they singled him out for mistreatment due to his sexual orientation.

As part of the settlement, the city and the Department of Corrections must also agree to adopt a nondiscrimination policy, and provide training and instructions to Rikers Island officers on how to ensure that policy is carried out.

“I went to visit my partner but ended up being harassed and assaulted in the visitors’ room by correction officers at Rikers because I am gay. They beat me quite severely that day. I will carry the physical scars from the facial fractures forever, but the larger scars of discrimination and anti-gay violence are what I hope to heal – or begin to heal – as a result of this settlement,” Hamm said. “I do not want anyone else to ever suffer this type of abuse at the hands of official New York City personnel, security or staff. As a New Yorker, I stand up for everyone in the hopes that this will not happen again.”

Hamm’s lawyers celebrated the settlement as a significant victory.

“Today’s settlement sends a strong message that correction officers are not above the law,” Omar Gonzalez-Pagan, a senior attorney with Lambda Legal, said in a statement. “No one — not an inmate or a visitor — forfeits the right to safety when passing through the gates of a jail or prison. The attack on Thomas Hamm, a private citizen, was unlawful and brutal and the cause was anti-gay violence and discrimination.

“For far too long, violence, discrimination and abuse of power have been the rule at Rikers Island. New York City’s Department of Correction has continuously failed to protect the safety and well-being of those in its care, whether they are incarcerated or visiting,” Gonzalez-Pagan added. “We are pleased to have achieved this modicum of justice for Mr. Hamm.”

“Visits to incarcerated people from their loved ones should be encouraged as research shows how important connection to family and friends is for ensuring people successful re-entry into society after release from custody,” Richard Saenz, a staff attorney and criminal justice and police misconduct strategist at Lambda Legal, said in a statement. “Who those loved ones are should not interfere with this right. Department of Correction officials do not get to harass and discriminate against people visiting the prison for any reason, including sexual orientation or gender identity.”

“For decades, the corruption and abuse at Rikers Island targeting incarcerated LGBT people — most of whom are black and brown — has gone unchecked,” added David Rankin of Beldock Levine & Hoffman LLP, who served as co-counsel on Hamm’s case. “We are hopeful this resolution will make it harder for this kind of discrimination and brutality to continue.”

See also: Gay man suing Colorado prison for allowing him to be raped and beaten by fellow prisoner

John Riley is the local news reporter for Metro Weekly. He can be reached at jriley@metroweekly.com
← Previous Story Gay Democrat Chris Pappas wins New Hampshire congressional primary
Next Story → Florida man accused of stabbing gay friend in neck after they had sex