Heavenly harmonies and one White-hot performance mark the high notes of Mosaic's Marie and Rosetta.

By André Hereford on September 6, 2018 @here4andre 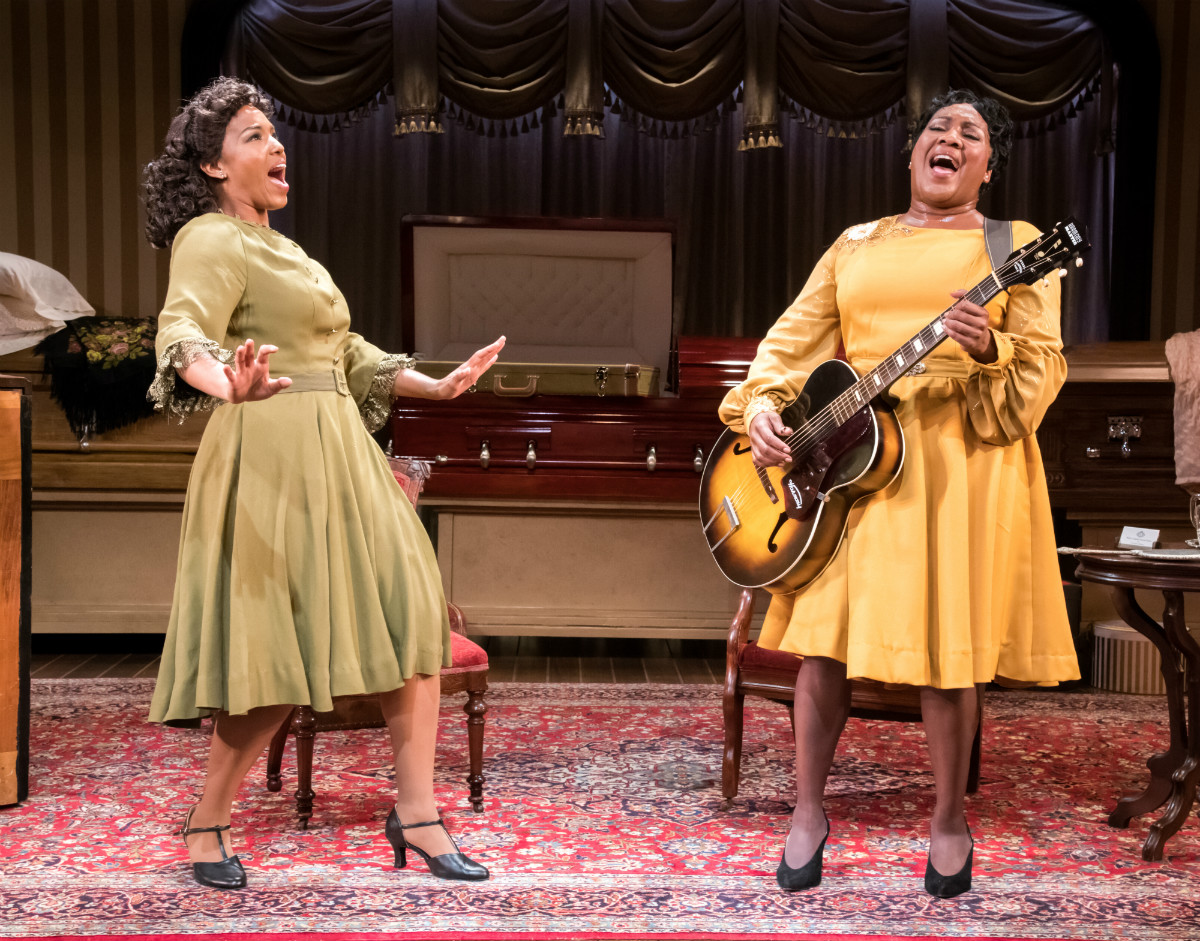 One fateful night in 1946, superstar gospel, blues and jazz performer Sister Rosetta Tharpe struck up a double-act with greenhorn church singer Marie Knight. The real-life duo went on to perform together for a few years, but their first rehearsal likely didn’t go down as imagined in George Brant’s sturdy musical play Marie and Rosetta (

Inside a funeral home in Mississippi, among what Sister calls “a bunch of souls gone to glory,” she sizes up her young discovery over a piano, a guitar, and an hour and a half of juicy conversation.

Inaugurating its fourth season with this D.C. premiere, Mosaic entrusts the delicate delivery of Brant’s two-character, one-night drama to director Sandra L. Holloway, who keeps the ball bouncing for the most part. It helps that she has Roz White, a dynamo who embeds herself in a Sister Rosetta who’s sharp and seductive, and deeply sincere.

Sister grew up on gospel, and gained fame singing and playing it, but then fell out with the spiritual set when she hit it big recording hot jazz numbers like “I Want a Tall Skinny Papa.” What Sister Rosetta now wants is to earn her way back into the good graces of her good people. She’d also like to get out from under the shadow of her main competition, the gospel legend she jokingly dubs “Saint Mahalia.”

White shapes Sister Rosetta with precision, making clear where the Mahalia Jackson joke meets with envy and admiration. Sister Rosetta might resent the more popular artist, but she loves her too, like she loves gospel music. That love flows through Sister, and through Roz White’s boogie-woogie performance singing Tharpe’s groundbreaking hit “Rock Me.”

Rehearsing among the funeral caskets, Sister is accompanied on an upright piano by her protégée, Marie Knight, portrayed by D.C. native Ayana Reed. In a standout scene during the course of the ladies’ practice session, Sister tries to teach the very proper Marie how to drop some hip into her keys-playing on “Rock Me.” The virginal-seeming former choir singer doesn’t get it right away, or completely, but she gets it.

White, with glorious timing, makes Sister a delightful instructor in music and in life. And Reed’s vocal performance as Marie, especially singing “Were You There (When They Crucified My Lord),” captures the audible slice of difference between singing hip or “high church,” as Sister likes to call it.

Melding disparate styles, White and Reed supply heavenly harmonies, but, alas, only one all-around, first-rate performance. Reed sounds excellent singing, but is less credible the rest of the time. The actress appears ill-served by her wig, which overplays its part just as Reed overplays the character’s real and practiced affectations. Even listening can be overacted, and it’s distracting. 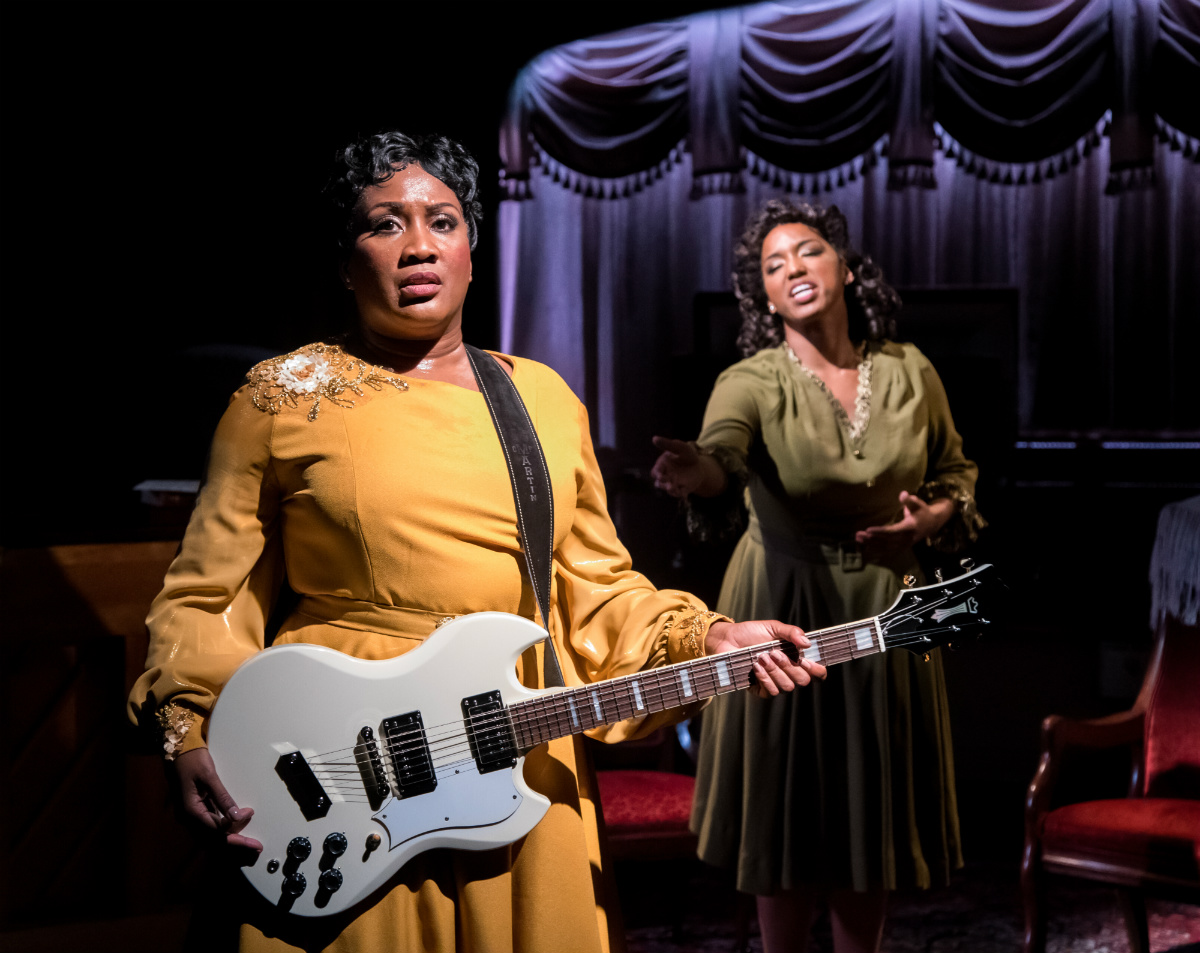 There are distractions enough onstage, considering that the audience must also suspend disbelief about witnessing Marie and Rosetta’s virtuoso musicianship, as Reed and White mime the playing. For this production, Ronnette F. Harrison plays the hell outta the piano, and Barbara Roy Gaskins rocks away on guitar, and Holloway has chosen to feature both musicians onstage where everyone can see them. While the double vision rightly evokes the sometimes forgotten history of pioneers like Tharpe and those artists whose contributions to music might never be remembered, watching three or four players, when only two are meant to be there, can look a little busy.

The play doesn’t get too busy, and neither does the production, with its appropriately staid and handsome funeral parlor set, designed by Andrew R. Cohen and lit by Johnathan Alexander. Again, the wig for Marie Knight is a miss, but Michael A. Murray’s costumes for both leads are lovely expressions of the their not-so-opposing personalities.

The story teases out their similarities in background and temperament, and the parallels in their lives. But rather than probe what it’s poking at, Marie and Rosetta calmly steers a firm, unsurprising path towards the birth of a fruitful partnership. Some have said that Tharpe and Knight’s duo was also romantic, but Brant’s script makes only enough of that innuendo to leave the matter open to possibility. 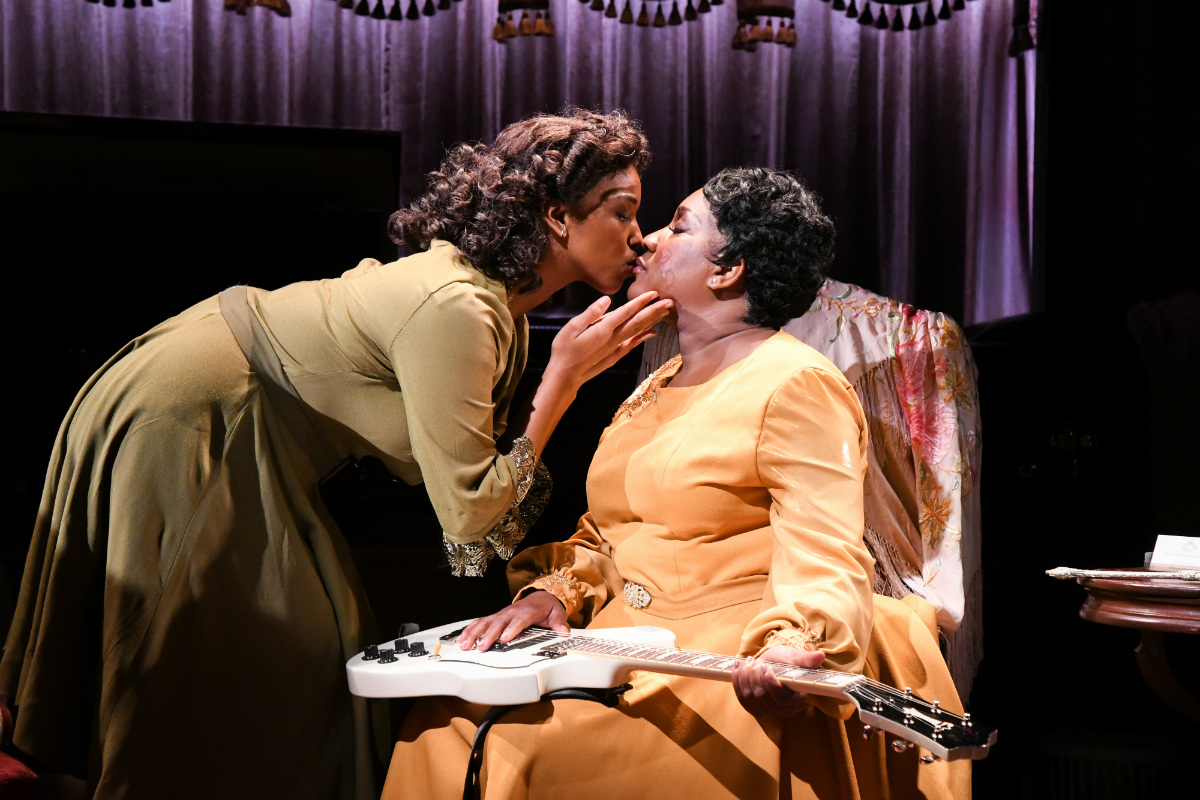 White’s performance simply suggests a Sister Rosetta who’s tasted many pleasures in life, and who’s cast aside regrets over anything that left too bitter a taste. She’s a big character, and yet the performance flows so easily. The play exerts itself noticeably towards the end, as the script transitions from slipping exposition into the act, to outright recitation of facts about Tharpe’s celebrated life. But the celebration emanating through White’s superb turn cannot be diminished by an overplayed hand.